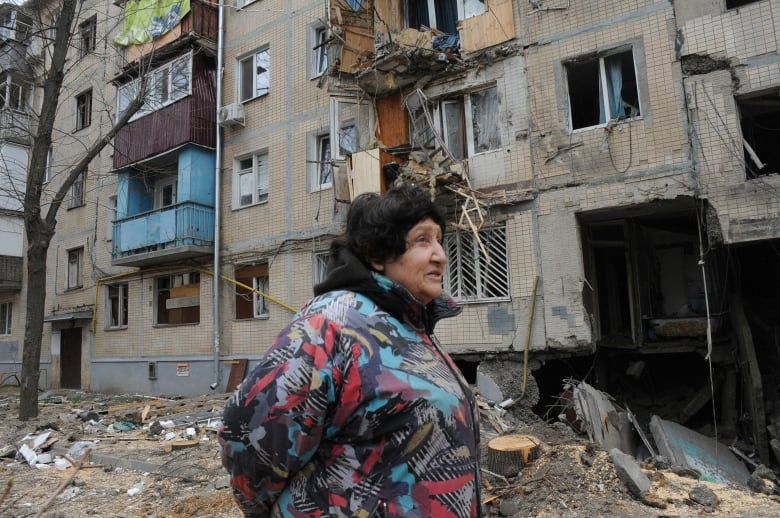 Zelensky says next few days of war are crucial, as Ukraine braces for new Russian offensive

Ukrainian President Volodymyr Zelensky warned his nation Sunday night that the coming week would be as crucial as any in the war, adding in his nightly address that he expects Russian troops to “move to even larger operations in the east of our state.”

Experts say the next phase of the battle may begin with a full-scale offensive that could start within days. The outcome could determine the course of the conflict, which has flattened cities, killed untold thousands and isolated Moscow economically and politically.

Russia’s military is believed to be preparing for a large, focused push to expand control in the country’s east. Russia-backed separatists have fought Ukrainian forces in the eastern Donbas region since 2014 and declared some territory there as independent.

Zelensky accused Russia of trying to evade responsibility for war crimes. “The day will come when they will have to admit everything. Accept the truth,” he said.

“When people lack the courage to admit their mistakes, apologize, adapt to reality and learn, they turn into monsters. And when the world ignores it, the monsters decide that it is the world that has to adapt to them. Ukraine will stop all this.”

Questions remain about the ability of Russia’s depleted and demoralized forces to conquer much ground after their advance on the capital, Kyiv, was repelled by determined Ukrainian defenders.

Britain’s Defence Ministry reported Sunday that Russian forces were trying to compensate for mounting casualties by recalling veterans discharged in the past decade.

However, Western military analysts say Russia’s assault was increasingly focusing on a sickle-shaped arc of Eastern Ukraine — from Kharkiv, Ukraine’s second-largest city, in the north to Kherson in the south.

The narrower effort could alleviate the Russian problem, earlier in the war, of spreading their offensive too widely over too great a geographic area.

On Sunday, Russian forces shelled government-controlled Kharkiv and sent reinforcements toward Izyum to the southeast in a bid to break Ukraine’s defences, the Ukrainian military command said.

The Russians also kept up their siege of Mariupol, a key southern port city that has been under attack and surrounded for nearly 1½ months.

Russian forces destroyed an airport and wounded at least five people as they fired missiles on Sunday at Ukraine’s fourth-largest city, Dnipro, a Ukrainian official said.

Neither side’s military claims could be independently verified.

WARNING: This video contains graphic details of violence and sexual assault and may affect those who have experienced sexual violence or know someone affected by it. Ukrainian MP Kira Rudik describes her visits to Bucha and Borodyanka, towns that were recently occupied by Russian forces and where civilian killings occurred. 7:39

Ukraine’s prosecutor general on Sunday said her team has documented 5,600 cases of war crimes perpetrated by the Russian government and its leading figures since the invasion began Feb. 24.

She added that Russian President Vladimir Putin was a “main war criminal of the 21st century,” but in accordance with international law, as long as the Russian president is in power, he enjoys diplomatic immunity and cannot be prosecuted unless the initiative is taken by the International Criminal Court.

Venediktova said on Saturday that the European Union was involved in the investigation.

Also talking to Sky News, Pascal Hundt, the head of the International Committee of the Red Cross delegation to Ukraine, said an aid convoy had made multiple unsuccessful attempts to reach the besieged city of Mariupol, where fierce fighting is ongoing.

Hundt described the security situation in Mariupol as “dangerous,” with humanitarian workers having to pass through multiple checkpoints to reach the city and without guarantees of their safety.

WARNING: This video contains graphic footage | Dozens are dead after two missiles hit packed crowds at a train station used to evacuate refugees in the eastern Ukrainian city of Kramatorsk. The Kremlin denied the attack, claiming its military forces had no access to the weapons used. 2:36

Venediktova called the missile strike at a train station in Kramatorsk, in Eastern Ukraine, on Friday “absolutely” a war crime. The strike killed at least 52 people and wounded more than 100 others as civilians were evacuating the city in the Donetsk region.

Russia denied responsibility and accused Ukraine’s military of firing on the station to turn blame for civilian casualties on Moscow. A Russian Defence Ministry spokesperson detailed the missile’s trajectory and Ukrainian troop positions to bolster the argument.

Meanwhile, the RCMP on Sunday released more details about their national investigation into the allegations of war crimes and crimes against humanity in Ukraine, which it announced on Thursday.

In a tweet, the Mounties said information provided to their investigation “will be protected, and only used for the investigation and future prosecutions. It will not impact your immigration status.”

On Thursday, the RCMP said they would be collecting information and evidence from Ukrainians entering Canada who wish to provide it, with the hopes of using the information in future criminal investigations, according to a statement from the partners of Canada’s War Crimes Program.

Ukraine’s border guard agency says that about 2,200 Ukrainian men of fighting age have been detained so far while trying to leave the country, in violation of martial law.

The agency said Sunday that some of them have used forged documents and others tried to bribe border guards to get out of the country.

It said some have been found dead while trying to cross the Carpathian mountains in adverse weather, without specifying the number.

Under martial law, Ukrainian men between the ages of 18 and 60 are barred from leaving the country so that they can be called up to fight.

Zelensky said late Saturday that democratic countries are united in working to stop the Russian invasion, as civilians continued to flee eastern parts of the country before an expected onslaught.

In his daily late-night video address to Ukrainians, Zelensky said that “Russian aggression was not intended to be limited to Ukraine alone” and that the “entire European project is a target for Russia.”

Several European leaders have made efforts to show solidarity with the battle-scarred nation. Zelensky thanked the leaders of Britain and Austria for their visits on Saturday to Kyiv, Ukraine’s capital, and pledges of further support.

Zelensky also thanked the European Commission president and Canadian Prime Minister Justin Trudeau for a global fundraising event that brought in more than $13.6 billion Cdn for Ukrainians who have fled their homes.

The Ukrainian leader repeated his call for a complete embargo on Russian oil and gas, which he called the sources of Russia’s “self-confidence and impunity.”

“Freedom does not have time to wait,” Zelensky said. “When tyranny begins its aggression against everything that keeps the peace in Europe, action must be taken immediately.”

More than six weeks after the invasion began, Russia has pulled its troops from the northern part of the country, around Kyiv, and refocused on the Donbas in the east, a largely Russian-speaking and industrial region.

Western military analysts said an arc of territory in Eastern Ukraine was under assault, from Kharkiv in the north to Kherson in the south.

Russia has appointed a new Ukraine war commander as the country gears up for a more focused offensive in the Donbas, a U.S. official said Sunday.

Moscow has turned to Gen. Alexander Dvornikov, 60, one of Russia’s most experienced military officers and — according to U.S. officials — a general with a record of brutality against civilians in Syria and other war theatres.

The senior official who identified the new commander was not authorized to be identified and spoke on condition of anonymity.

Despite the decision to establish new battlefield leadership, Western assessments have expressed confidence in the ability of Ukraine’s defenders to repel Russian assaults, portraying Russia’s troops as suffering from low morale and mounting casualties.

Britain’s Defence Ministry said Sunday that the Russian military was seeking to respond to mounting losses by boosting troop numbers with personnel who have been discharged from military service since 2012.

In an update on Twitter, Britain’s Defence Ministry also said that the Russian military’s efforts to “generate more fighting power” also include trying to recruit from Trans-Dniester, a breakaway region in Moldova that borders Ukraine.

Russia-backed separatists in eastern Moldova took up arms in 1992 to establish Trans-Dniester, which is not internationally recognized and where Russia maintains some 1,500 troops.

Ukrainian authorities have called on civilians in Eastern Ukraine to get out ahead of an imminent, stepped-up offensive by Russian forces.

With trains not running out of Kramatorsk on Saturday, panicked residents boarded buses or looked for other ways to leave, fearing the kind of unrelenting assaults and occupations by Russian invaders that brought food shortages, demolished buildings and death to other cities.

Ukraine’s state railway company said residents of Kramatorsk and other parts of the Donbas could flee through other train stations.