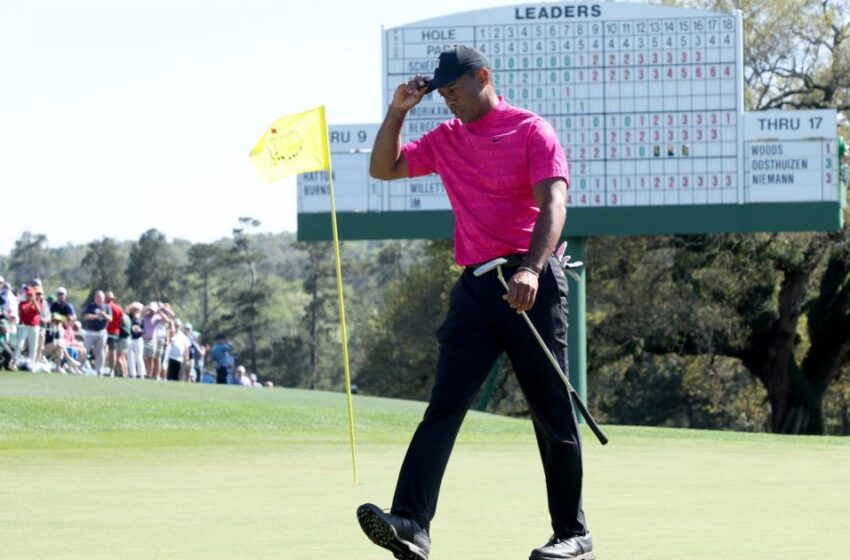 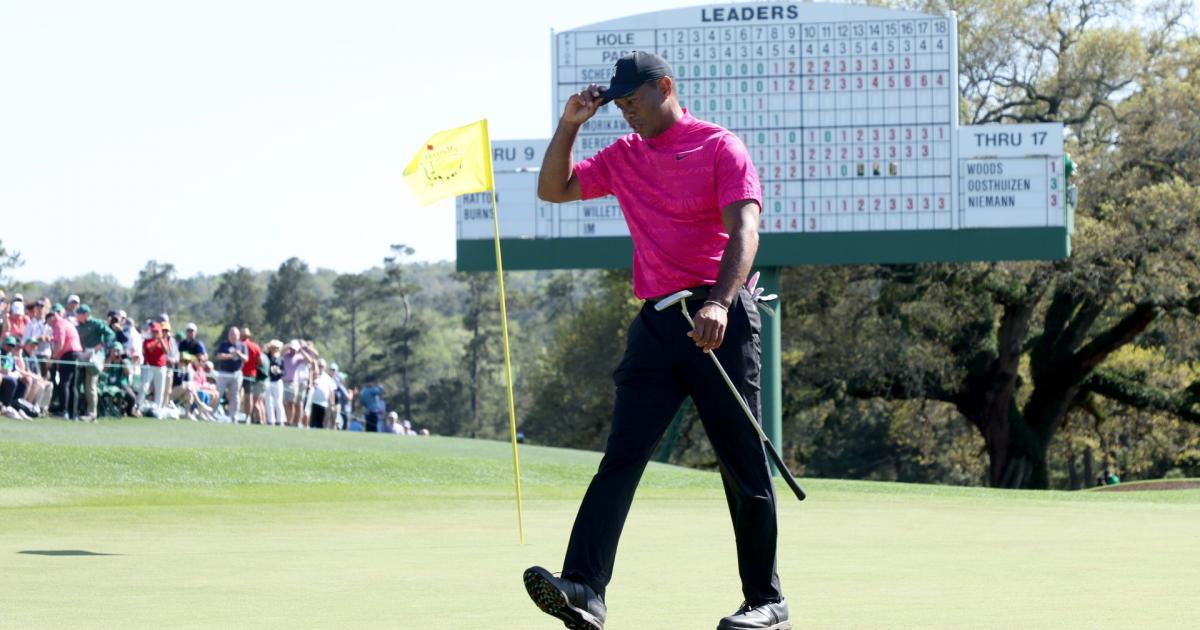 Everyone was wondering what Tiger Woods would do in his first day back at the Masters since his February 2021 accident. He delivered a performance only Tiger could produce.

Woods finished his first round at the 2022 Masters Tournament one stroke under par. Never during the round was he over par.

Woods made par on each of the first five holes at Augusta National Golf Club before birdieing the sixth. He bogeyed the eighth hole to fall back to even par. Woods posted another birdie on the 13th hole but bogeyed the next. He delivered his third birdie on the 16th and stayed under par the rest of the round.

The legendary golfer delivered in the clutch on the green, saving several pars with long-distance putts. He struggled at times on the longer holes, finishing with an even 20 shots on par-5 holes and failing to capitalize on birdie chances.

Woods ended his day tied for eighth on the leaderboard. He’ll return to the course at 1:41 p.m. ET on Friday.

The Sporting News tracked Woods’ score and highlights from the first round of the 2022 Masters.

Tiger Woods score, highlights from Round 1

A par save on 18 to keep @TigerWoods in red numbers for his opening round.

Shot 4: Woods knocks in the putt, and finishes his first day at Augusta under par.

Shot 3: He lifts that shot up onto the green and sets himself up with a decent chance to save par on the 18.

Shot 2: Woods’ tee shot set him up 270 yards from the green, but he will be able to take a shot from the fairway instead of in the trees. The shot doesn’t quite reach the green, but sets him up in a decent position to be able to reach it on his next shot.

Shot 1: Woods’ first shot on the 18 sails wide left into the trees. Not the start he was hoping for on the final hole of the day.

Shot 4: Woods finishes off his par.

Shot 3: Woods’ putt broke a little bit to the right on approach. He’ll get another shot now for par.

Shot 2: Another great approach by Woods as he drops his second shot onto the green. He’s got a chance at another putt for birdie at the 17.

Shot 1: Decent start to the 17th hole, driving the ball deep, but hooking it just right of the fairway. He’s 160 yards back of the hole.

Shot 2: Woods gives the fist pump after a smooth birdie putt puts him back at 1 under for the day.

Shot 1: Great shot by Woods as his drive on the short hole is on the same plane as the hole. Sets him up for a birdie putt.

Shot 5: Woods finishes off the short putt to finish at an even par. On par-5 holes today, he finished at just one under.

Shot 4: Woods comes up just a bit short on the hole on his fourth shot.

Shot 3: Woods took a while in the crowd to find the ball. His next shot lands on the green, setting him up in a position to make it in four.

Shot 1: Important hole for Woods as he has a chance to get back under par for the day on a par five. He starts the 15th hole with a strong drive that just rolls off the fairway into the crowd.

Shot 5: Woods finishes the 14th hole with a bogey. After the save with his second shot, felt like he’d have a chance to earn back par, but can’t finish on his first putt.

Shot 4: Woods can’t save par as his putt pulls just to the left.

Shot 3: Woods used his wedge to try and close the gap, but the wind caught the ball and carried it past the hole. Still within putting range.

Shot 2: Incredible shot by Woods to get himself out of the pine straw to get the ball above the trees and just outside the green.

The return of the recoil 😯🐅pic.twitter.com/7VEckbl0Vu

Shot 1: Rough opener for Woods, who hooks his shot on the 14th hole to the left into the crowd among the trees.

Two strokes off the lead. Tiger is in chase. #themasters pic.twitter.com/Fc2Olaflbh

Shot 4: That’s a birdie for Woods, his second of the day. He now has two birdies, one bogey and 10 pars.

Shot 3: Woods’ putt for eagle comes up just short. He’ll be able to just finish it off easily.

Shot 2: Woods has set himself up for an eagle putt after dropping it on the green.

Shot 3: Woods finishes up his two-putt par on the 12th hole. Fourth straight par in Round 1.

Shot 2: The first putt sails just up and past the hole, but he’s lined up again for a short putt for par.

Shot 1: Woods drops his shot right on the green. It would have to be a long putt to reach the hole, but he’s certainly within range of making par.

Shot 4: Another par for Woods. He remains even with seven more holes left in Round 1.

Shot 3: Woods’ third shot gets him a few feet away from the hole.

Shot 2: Nice shot by Woods gets him close to the green, avoiding the water.

Shot 1: Powerful drive by Woods to start the 11, and he easily stays on the fairway. He’s 242 yards away from the hole.

Shot 3: Solid approach by Woods gets him about four feet away from the hole with a putt for par coming up.

Shot 2: Woods’ swing gets just short of the green, but it takes a long roll down the hill.

Shot 1: Perfect drive by Woods to start the 10th hole. He’s rebounded well after tough starts on the eight and nine.

Shot 4: Strong putt by Woods to save par on the ninth hole. He’s even through the first nine.

Shot 3: Chip shot from Woods is a bit too hard and it goes past the hole. Doesn’t roll back as much as he’d have liked. Could be a tough putt to save par.

Shot 2: Woods gets it onto the green, but it rolls down the slope a bit.

Shot 1: Woods hooks his drive to the left into the trees, and appears to have some discomfort in his back. But the shot has a straight look at the hole. Could’ve been worse.

Shot 6: Woods finishes the eighth with a bogey.

Shot 4: Mistake shot by Woods that goes too far on the green. It could be difficult to save par at this point.

Shot 3: The third shot from Woods can’t quite reach the putting surface. Still should be able to make par.

Shot 2: Woods’ shot uphill is a bit short and wide right of the hole.

Shot 1: Woods gets a clean drive up the fairway. He’s 269 yards away from the hole.

Shot 4: Woods finishes with par on the seventh hole with the putt.

Shot 3: Another great approach by Woods. A few feet away from par.

Shot 2: Woods helps himself out on the second shot, getting the ball back to the fairway and just below the bunker on the upslope.

Shot 1: Woods’ first shot on the seventh hole bounces out of the fairway. Not a great start after the birdie. He’s 161 yards from the hole.

Shot 2: There’s the first birdie of the day for Woods. He drops under par for the tournament.

Shot 1: Woods adds another highlight to his day. Drops it right at the hole, nearly in for a hole-in-one.

Nearly a hole-in-one from @TigerWoods 😳 pic.twitter.com/8xVAGUkOrj

Shot 4: He taps it in for the par. Certainly some disappointment from him that he wasn’t able to get that in for a birdie.

Shot 3: Woods’ attempt for a birdie just bounces out of the hole. He thought it was going in.

Shot 2: Woods with perhaps his best shot of the day. He lands that right on the green just a few feet away from the hole.

Shot 1: Woods keeps it on the fairway with a strong drive to start the fifth hole. His shot went 287 yards, and puts him 218 yards away from the hole.

Shot 3: No problem for Woods on his second putt. He knocks it in for his fourth par of the day.

Shot 2: Woods can’t quite get enough behind the putt to get his shot in, but he should have no problem making par.

Shot 1: Woods’ shot looked good, but rolled a bit further down the green. Still below the hole, but that could be tough to birdie.

Shot 4: Another par for Woods. He’s even through the first three holes.

Shot 3: Woods’ putt lost some speed as it closed in, and wound up a bit short of the hole. He is still in position to make par on his next putt.

Shot 2: That shot nearly landed right next to the hole on the green. Great shot to set him up well for at least par.

Shot 1: Using his iron, Woods plays a bit conservative and spots his first shot behind the bunker. He is just 135 yards to the hole.

Shot 5: He finishes off the second hole with par.

Shot 4: The putt from Woods is just off.

Shot 3: Woods connects sends it on a line onto the green. Would be a long putt for birdie, but it is doable.

Shot 2: His next shot is about 50 yards away from the hole.

Shot 1: Woods sends his first shot on the second hole 271 yards down the fairway.

Tiger Woods begins his 24th Masters with a par on the first. #themasters pic.twitter.com/gTva7ZznsP

Shot 4: Woods makes it look easy. He makes par on the first hole.

Shot 3: Woods is able to chip it close to the hole. Could be close enough for par on his first putt.

Shot 2: His next shot lands on the green, but rolls just off the front.

Woods is scheduled to begin the 2022 Masters Tournament at 11:04 a.m. ET Thursday in Round 1. He will be paired with Louis Oosthuizen and Joaquin Niemann.

Over the course of the four-day tournament, ESPN and CBS will split afternoon coverage of the Masters. Over the first two days, ESPN will have exclusive coverage of the afternoon rounds, starting at 3 p.m. ET and running until 7:30 p.m. ET.

To watch the afternoon coverage, fans can find ESPN’s broadcast of the Masters on either ESPN+ or fuboTV, which offers a free trial for first-time users.