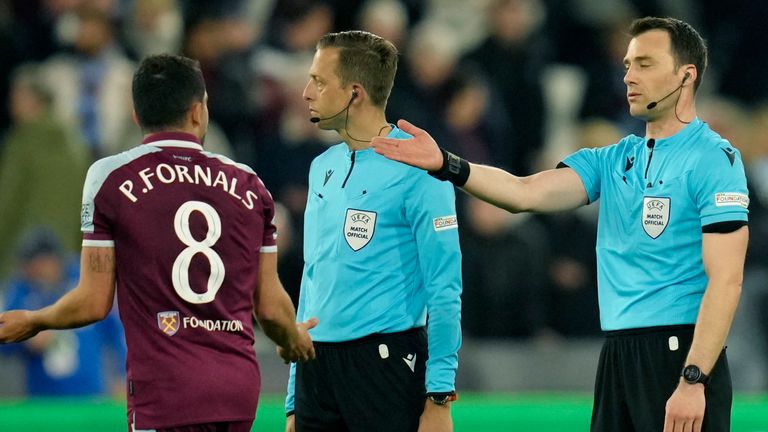 The Hammers battled to a creditable 1-1 draw against the French side after Cresswell was sent off just before half-time, with the game goalless.

The defender was shown a red by Zwayer for bringing down Lyon captain Moussa Dembele when he was the last man.

But Moyes feels his side should have been given a foul moments before Dembele was put through, after Bowen went down in the build-up to the dismissal.

Asked about Cresswell’s red card, the Scot said: “The only thing I want to say about it is that I think the tackle on Jarrod Bowen leading up to it was a foul.

“I think it’s in the same phase of play, which I would expect VAR to have intervened and done something. That’s the disappointing part for me.

“If it’s a foul, VAR should’ve intervened and gone back – that’s what we do in the Premier League.

“It’s in the same phase of play and I would have expected VAR to check that.”

Moyes was booked at half-time by Zwayer after he angrily confronted the German official.

The Scot had cut a frustrated figure even before Cresswell’s red card as Zwayer continuously stopped the game due to fouls and injuries, much too to the annoyance of the home crowd.

Asked about the constant stoppages and fouls, Moyes responded: “I watch a lot of games in Europe. I think that the way the games are played here [in England], we’ve moved on from soft free-kicks in this country. The referees have moved on and tried to change the way it goes.

“And to be fair, I think the referees we’ve had in the [Europa League] games this season have all been very, very good and allowed the games to flow and not accepted soft things.

“I just thought the game never got any chance to flow really from the early part. It was quite broken up.”

Moyes even suggested that Zwayer’s performance affected how his players played, claiming Michail Antonio pulled out of a chance to score West Ham’s second, in fear of being punished for challenging the onrushing Lyon goalkeeper Anthony Lopes.

He said: “I didn’t get a chance to speak with him [Antonio] there, but I felt that he had the chance to make contact with the ball.

“I don’t know if we all had to play the game slightly differently tonight under the conditions, so maybe he felt that pulling himself away from it was the safest thing to do.”

Moyes was further frustrated by two pitch invaders in the second half, with the second in particular disrupting a rare Hammers attack.

Asked whether he was baffled by them, he said: “I was. This is a really good football club and it’s doing so many good things to improve.

“But those things tonight certainly didn’t help the team, because we were on a counter-attack at the time with an opportunity to score.”

What’s next for West Ham?

West Ham return to Premier League action on Sunday when they travel to Brentford; kick-off at 2pm.