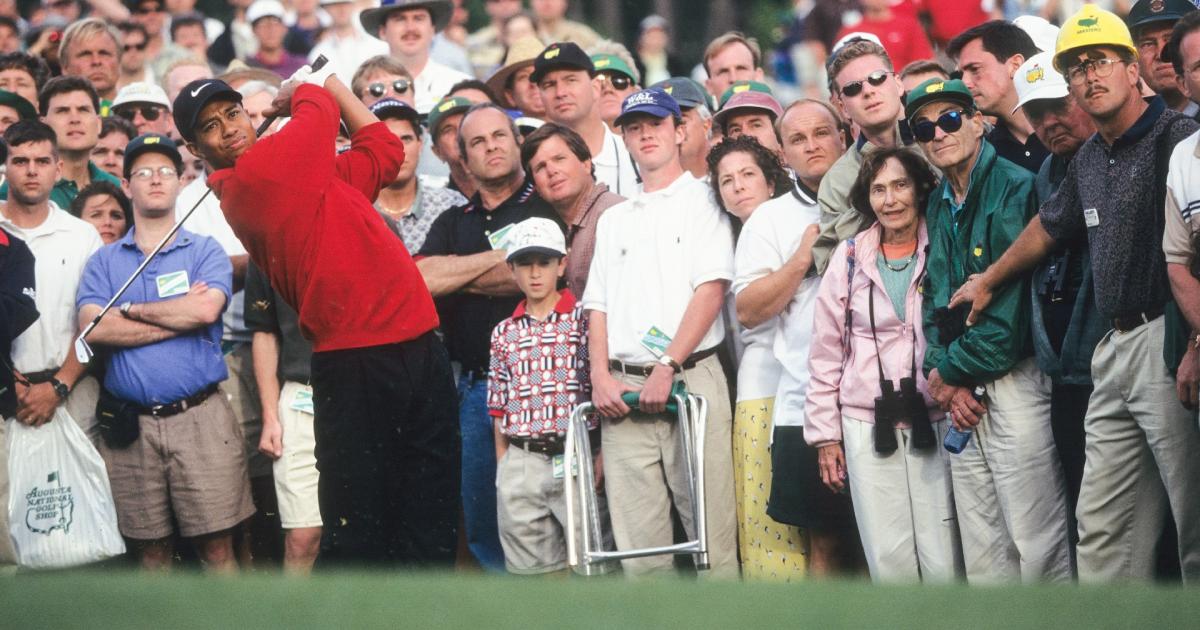 Tiger Woods wasn’t and isn’t the first golf star. Plenty of players had made their names over the years before he came onto the scene.

But in 1997, Tiger Woods arguably became golf’s most transcendent superstar with his dominant win at The Masters. Woods shot a 270 at Augusta, a full 12 strokes better than the field and the best score ever at the time.

The 21-year-old Woods had turned pro just a year prior after an outstanding amateur career, and it was his first win at a major championship.

April 10-13, 1997 are the four days in which Woods changed golf. He became must-see TV every time he played, and became a personality outside the game. Woods interviewed with Oprah Winfrey after his win and gave a lengthy ESPN interview that showed poise well beyond his years. He seemed like a perfect ambassador for the game.

BETTING ODDS: How realistic are Tiger Woods’ chances to win a sixth green jacket in 2022?

Tiger Woods won his first Masters in 1997 in a dominant performance. He was just 21 years old when he got his first green jacket, shooting a 270 at Augusta to beat the field by 12 strokes.

It was a record-breaking performance at the time that was tied by Jordan Spieth in 2015 before finally being broken in 2020 by Dustin Johnson (268).

TIGER BY THE NUMBERS: Woods’ records as he eyes return at 2022 Masters

Despite the dominance that was to follow, Woods struggled early. He bogeyed his first, fourth, eighth, and ninth holes; finishing four over on the first nine. With that score and with Amen Corner still to follow, it appeared Woods might be looking at an early exit. At 21 years old, who could blame him?

What followed was nine holes of mastery. Woods shot a two on Augusta’s famous 12th hole, chipping it in from the green behind the pin after initially overshooting. On the ensuing 13th hole, he nestled his second shot on the green, securing a second straight birdie. When the back nine was finished, Woods had shot six under to get to a two-under 70 for the day, despite a rough start. He finished the day fourth on the leaderboard.

By the end of the second round, it was clear Woods was a class above the field. He shot a 66 on the par-72 course, including just one bogey, and he went eagle-birdie-birdie at 13, 14, and 15. Woods’ first lead came with that eagle at 13, and it was a lead he would hold a vice grip on for the rest of the weekend.

By the end of the day, Woods was taking a three-shot lead into the weekend.

TIMELINE: How Tiger made remarkable 13-month recovery from crash for Masters return

It didn’t seem like Woods could top a 66. To have a player his age shoot that for a day is incredible by itself. But taking a lead into Saturday, Woods was playing against himself. Somehow, he won.

Woods followed up Friday’s masterful performance with a bogey-free 65. It was a day that didn’t have the eye-popping shots of Friday or even Thursday, but it featured a surgical approach to the course. Woods had seven birdies on the day, and set a personal best score at Augusta National that he hasn’t beaten to this day.

Woods capped the weekend off with a relatively uneventful Sunday. Though he hit a speed bump and bogeyed two of three holes on the front nine (five and seven), his lead was never in question. Woods’ final round resulted in a score of 69, putting him at 270 for the weekend — 18 under par. The score broke a record of 271 set in 1965 by Jack Nicklaus and equaled by Raymond Floyd in 1976. Jordan Spieth would tie the historic score in 2015, before Dustin Johnson finally broke it in 2020.

Sunday also birthed Woods’ famous outfit: the red shirt and black pants, a look that is now synonymous with greatness in golf.

While shooting that well is always laudable, the fact Woods did it at such a young age among so many experienced players who doubted him (Curtis Strange famously scolded Tiger Woods a year prior for saying he would measure success in his first pro tournament by if he won, saying “you’ll learn.”) cemented the performance in history.

Woods’ green jacket that year was his first of five to date. He followed it up with wins 2001, 2002, 2005, and 2019. While each triumph was momentous in its own way, none of them quite captured the dominance of his debut.

Then again, not a lot of victories could.