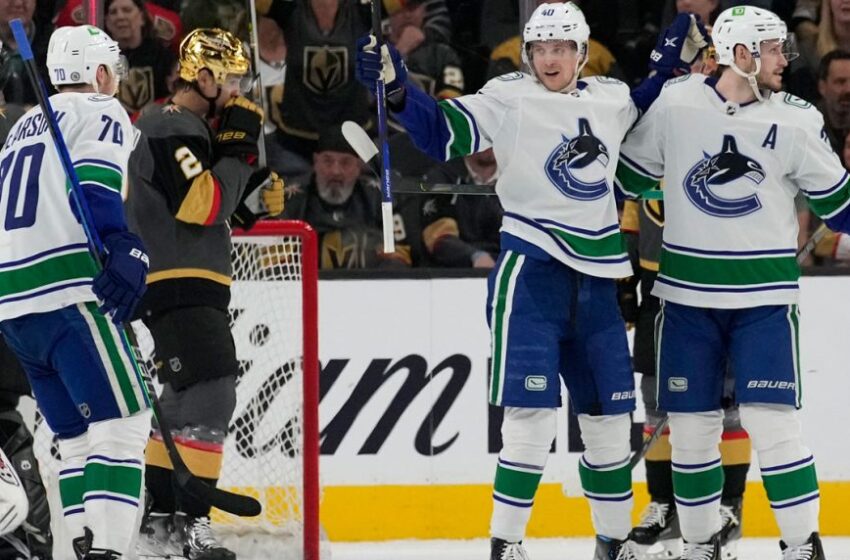 LAS VEGAS (AP) — Elias Pettersson scored twice and had two assists to lead the Vancouver Canucks to a 5-1 victory over Vegas on Wednesday night, snapping a five-game winning streak for the Golden Knights.

The victory gave the Canucks’ slim playoff hopes a boost as they chase a Western Conference wild card. Both the Golden Knights and Canucks are on the outside looking in, with Vancouver in desperation mode.

Vegas (82 points) is one point behind eighth-place Dallas, while the Canucks (76) are seven back of the Stars.

Bo Horvat, Brad Richardson and Tanner Pearson also scored for Vancouver. Thatcher Demko was excellent in stifling what had been a red-hot Golden Knights offense by stopping 33 shots.

The Golden Knights averaged 4.4 goals during their five-game run.

In this one, they looked more like the team that endured a 2-8 stretch while averaging a mere 2.1 goals per game before the five-game streak. Jack Eichel scored the lone goal for Vegas, and Robin Lehner made 26 saves.

It marked Vancouver’s first victory over the Golden Knights since they joined the NHL in 2017.

After taking a swipe from the slot with a one-timer he thought went in but Demko swatted away, Eichel ended up with a rebound following a series of shots and found the back of the net to give Vegas an early 1-0 lead.

The Canucks took advantage of a power play late in the first period after Ben Hutton was called for holding. Pettersson’s shot from the point deflected off Lehner’s right shoulder and right to Horvat, who punched it home for an equalizer.

It took 17 seconds for Vancouver to grab the lead, as Richardson snuck into the slot behind Vegas defenseman Alec Martinez and fired home a loose puck from the inside edge of the right circle and under Lehner’s pads.

The Canucks opened a two-goal cushion midway through the second period when Pettersson sent a beautiful pass across the slot to Pearson, who finished off the rush by beating Lehner with a wrist shot over his blocker.

After assisting on two of Vancouver’s first three goals, it was Pettersson’s turn to be on the receiving end of a nifty pass. Left alone by the front corner of the net after spinning away from Eichel, Pettersson redirected Oliver Ekman-Larsson’s backdoor pass to make it 4-1.

A little more than a minute into the third, Vegas defender Brayden McNabb went to the penalty box for tripping. Seven seconds later, Pettersson netted his second goal of the night.