Mayer: Shields too ferocious for Marshall

Mikaela Mayer believes Claressa Shields will “come out on top” when she faces Savannah Marshall, with the undisputed world title fight expected to be announced in the coming days.

Shields sat ringside as Marshall set up their grudge match in Newcastle on Saturday, sending Femke Hermans crashing to the canvas in a third-round knockout win, and turning everyone’s attention to their rivalry.

The Hartlepool fighter has been described by her coach Peter Fury as the “biggest puncher” in women’s boxing, but fellow world champion Mayer insists Shields will have a scarier mindset as she attempts to avenge an amateur loss to Marshall.

Mayer, who defends her world titles on Sky Sports this weekend, said: “I’m going to sound biased, because Claressa is my team-mate and friend, but although Savannah is proven to have power, I think that Claressa’s punch count and speed is a lot for anyone at that weight to handle.

“I do see her coming out on top, but either way I’ll be there to support. I can’t wait for it. 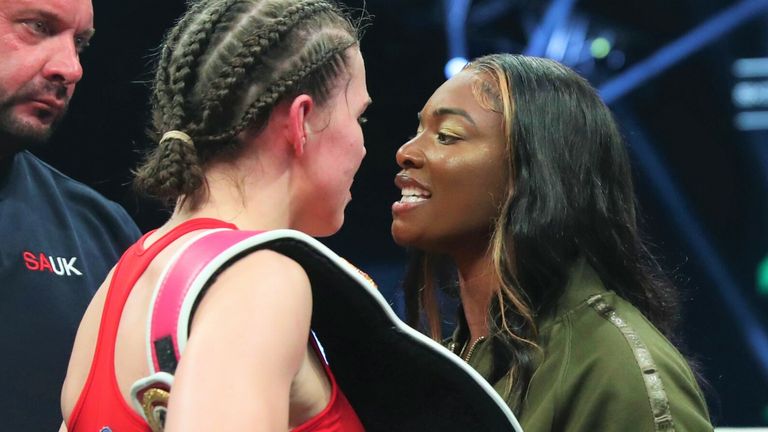 “Just her ferociousness, when she gets in the ring. She doesn’t like to lose and so she has a chip on her shoulder because Savannah is the only one to ever beat her.

“I think we’re going to see a different Claressa Shields that night, a scarier one!”

Despite backing her team-mate, Mayer is as excited for what the fight can potentially do for the growth of women’s boxing.

She said: “Savannah is a great boxer. I know here from the amateurs. She has obviously crossed over into the pros very well, she has a good name over there – people love her – and she seems to have a good pro style, some good pop.

“I think that her fight with Claressa Shields is going to be a great fight.

“This is what women’s boxing needs, we need these rivalries, these big fights to happen.

“We’ve had so many in the past couple of years and this is just another of those really great ones. I can’t wait to see it.”

Boxxer promoter Ben Shalom said after Marshall’s bout with Hermans that the fight is just “days away” from being confirmed, with a summer showdown in the UK expected to be announced.

Watch Mayer defend her WBO and IBF titles against Jennifer Han live on Sky Sports Action in the early hours of Sunday morning from 2am.