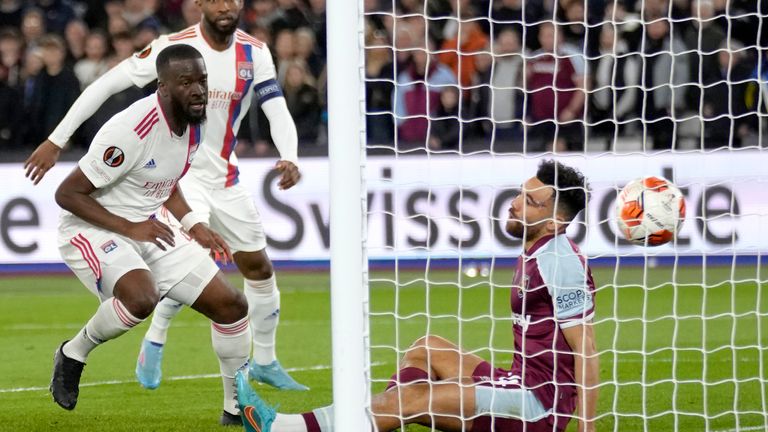 West Ham’s Europa League quarter-final tie against Lyon remains in the balance after the 10-man Hammers battled to a 1-1 draw in the first leg at the London Stadium.

West Ham spent the entire second half a man down after defender Aaron Cresswell was sent off in first-half stoppage time. Cresswell was shown red after he brought down Lyon captain Moussa Dembele when through on goal, with the game goalless.

But the Irons took a shock 52nd-minute lead when Jerome Boateng’s mistake fell to Jarrod Bowen whose shot deflected off of the diving German defender to loop over Lyon goalkeeper Anthony Lopes.

West Ham’s lead, however, lasted just 14 minutes as they were haunted by on-loan Tottenham midfielder Tanguy Ndombele after he tapped home from close range.

The second leg in France will take place next Thursday (April 14) with the winner of the tie meeting either Barcelona or Eintracht Frankfurt in the last four.

The atmosphere at the London Stadium was red-hot ahead of West Ham’s first European quarter-final since 1981 as they faced a Lyon side languishing in ninth in Ligue 1.

But the French side belied their poor league position throughout the match as they settled well in the capital, with former Fulham and Celtic forward Dembele miscuing their clearest chance of the first half.

West Ham’s best opportunity of the opening 45 minutes fell to Said Benrahma after he was denied from a tight angle by Lopes.

The turning point of the match came in the third minute of first-half added time as Cresswell pulled down Dembele outside the West Ham box and was shown red by German referee Felix Zwayer for a last-man foul.

West Ham’s frustration though, quickly turned to joy as Bowen struck seven minutes into the second half to give the 10-man Hammers a surprise lead. The Englishman making it two goals in two games since returning from a month-long injury lay-off in Sunday’s win over Everton.

But it proved to be West Ham’s final chance of the game as Lyon grabbed a 66th-minute equaliser through Ndombele.

The on-loan Spurs player was on hand to turn home substitute Tete’s low cross that had rebounded off Ryan Fredericks after Alphonse Areola had got a hand on the Brazilian winger’s delivery.

Lyon unsurprisingly pushed for a winner as West Ham were frustrated by two pitch invaders, the second in particular, as he disrupted a rare Hammers attack.

What’s next for West Ham?

West Ham return to Premier League action on Sunday when they travel to Brentford; kick-off at 2pm.