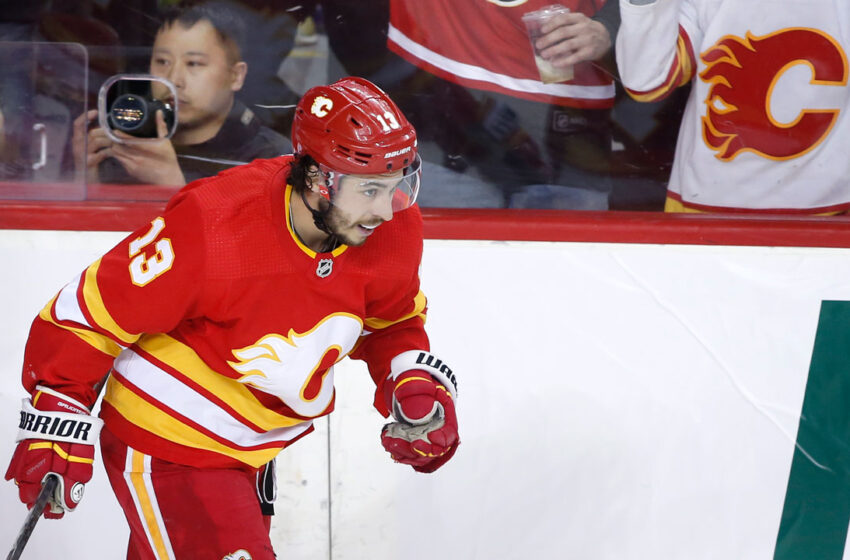 Craig Conroy has had a front row seat for Johnny Gaudreau’s ascension from college hotshot to NHL all-star to Century Man.

Who better to chat with about Gaudreau’s milestone than the Flames assistant GM, who openly discussed the playoff advice he shared with Gaudreau, and why he thinks the face of the franchise is better positioned for springtime success this time around.

In a wide-ranging discussion on The Eric Francis Show, Conroy stated his Selke case for Elias Lindholm, identified what has surprised him most about this team, projected how Matt Coronato should fit as an NHLer, and insisted that nothing about the current group reminds him of the 2004 team he starred on.

He also shared one of his favourite Darryl Sutter stories, involving a loaded offer from the coach to snag an autograph or two from the opposition.

Sportsnet: Can you speak to the significance of Johnny Gaudreau eclipsing the 100-point mark?

It’s like when we say, “It doesn’t matter when we play our old team.” Let’s be honest, we want to beat them more than any other team. That’s what we have to say as players.

Even when Jarome (Iginla) was leading the league in scoring, (he never got to 100). Obviously, the game has changed and scoring has gone back up since then, but for me, that’s a special, special number.

Why is Gaudreau better positioned to have success in the playoffs than he was, say, two or three years ago?

I think back to when I was in St. Louis, they said, ‘Brett Hull can never win.’

Well, you know what, that’s not true.

The way I look at it now is that everyone wants Johnny to do it. It’s so hard to win in the playoffs, and you put so much pressure on one player.

I do think the game changes a little bit in those playoffs.

A lot of times Monny (linemate Sean Monahan) was hurt. He had different linemates and was getting the hard matchups.

And you need to get some breaks early in those series. It’s so hard to score in the playoffs that everyone wants him to continue with that pace. He did create chances and he does make plays. He doesn’t get as many calls.

After the last one what I talked to him about it and said, “Hey, the last game you played, the way you drove through the middle and didn’t shake your hand, that’s how you’re going to have to play because they’re not going to call those little ticky-tack penalties they do in the regular season. And by you doing that it kind of shows the ref up. So you just have to play your game.”

For sure with Darryl he’s going to help that situation. That’s what we’ve always believed bringing Darryl in would do. I got to live it first-hand and to see what he does, how he handles things and what he expects out of everybody.

I think the line he’s on is built for the playoffs.

I think we’re a little bit hard because we’re like, ‘They didn’t win the Stanley Cup.’

Well, they’ve won a lot of other things.

Does this team remind you of the 2004 Cup final team in any way?

No. The ’04 team was blood and guts and “gonna get by with Jarome and Kipper,” two stars. The rest of us knew, because Darryl told us, “we don’t have enough skill. We need to win 1-0.”

That means Kipper and Jarome do their thing and the rest of you guys make it hard to play against. I thought we were a little better than Darryl might have told us but that was his mindset going in.

But with this team I see scoring all over.

I know the guys haven’t scored maybe at the clip we’d want recently, but I’m not even worried.

I’d rather be a little cold now and then heat up in the playoffs.

Given where this team was last fall and where it is now, what has surprised you most about this group?

How well the top line has played.

Our third pairing has been amazing. Really amazing. I don’t give (Noah) Hanifin and (Rasmus) Andersson enough credit.

Our whole d-core, as a unit, has been outstanding.

You’re hoping this is how it was going to go. Did I see it going this way? No. You’re waiting to watch the games to see how it’s going to work, but I can’t say enough good things about what that group has done.

That might be even more surprising than the first line.

Then the other guys coming in. The leadership from the Lewises and the Colemans, who have won before and just go about their business, brings that to the table.

What Darryl’s doing is what we brought Darryl in for, to win games and to get us in a position to make the playoffs and from there to move forward.

This was a team we believed in, and with all his experience, I know he said he didn’t think that coming in, but I don’t think Darryl takes a job unless he thinks he can take a team to where it can contend for a Stanley Cup at some point.

State the case for Elias Lindholm to win the Selke this year as the NHL’s best defensive forward?

He does everything defensively that I want. The way he kills penalties, faceoffs, his little attention to detail and the way he supports his defence.

When (Mikael) Backlund was going that year (2018-19) for the Selke, and he was up against (Patrice) Bergeron, Bergeron was better. He just was. I want to be honest, even though Backs had an unbelievable year.

This year I truly think he’s the best defensive forward out there.

But if they just do watch him, I don’t even think it’s close this year, to be totally honest.

You saw lots of Flames first-round pick Matthew Coronato while he played as a freshman at Harvard this year. Where does he project as an NHLer?

I see top-six to start.

You never want to put pressure on kids where you have to be a first-line guy. Time will tell, but his vision, the way he plays away from the puck, the way he just makes plays like Johnny, one step ahead, that’s what I love to see.

He played wing this year. I personally loved him at centre last year, but whether he’s going to be centre or wing we’ll see where he is next year.

I like him at centre because he sees the ice so well, he steals pucks, he’s strong on pucks. His little attention to detail plays that he can make, kind of the way I watch Lindholm away from the puck and when he gets the puck.

Wherever it is, he’s going to be a top-six forward, power play, penalty kill. He’s just an all-around good player who can play anywhere.

I understand Sutter gave you guys a unique opportunity in 2004 to get autographs of anyone you wanted on the Red Wings that spring?

We won the first game of that series in overtime and it gave us some confidence.

They do have pretty much a Hall of Fame power play and in Game 2 they were rolling, and it was a beating.

We come into the locker room and Darryl is upset.

He said, “Okay, let’s get it out of the way boys. Brett Hull, Nick Lidstrom, Brendan Shanahan, Steve Yzerman…I’ll get you guys autographs now, because you guys are like, Wow, the Detroit Red Wings. They’re the greatest thing ever.”

He was being sarcastic, and all of a sudden out of nowhere, Rhett Warrener says, “well if you’re getting autographs, I’ll take a Nick Lidstrom jersey.”

We were all trying not to laugh, but the way he said it and the timing, was classic.

Darryl gave a few last words and left, and we all burst into laughter. Given the beating we took it really lightened the mood.