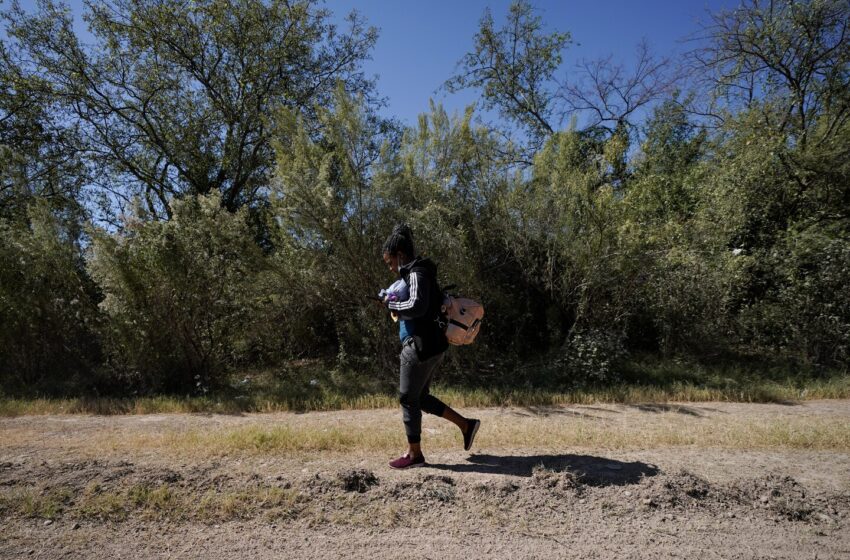 MIAMI — Cuban migrants are coming to the United States in the highest numbers since the 1980 Mariel boatlift, making their way across the U.S. southern land border.

Last month, more than 32,000 Cubans were taken into U.S. custody along the Mexico border, double the number who arrived in February, according to unpublished U.S. Customs and Border Protection (CBP) figures obtained by The Washington Post. CBP is on pace to apprehend more than 155,000 Cubans during the current fiscal year, records show, nearly four times the 2021 total and a twelvefold increase over 2020.

Many of the new arrivals are flying to Nicaragua, which dropped its visa requirement for Cubans last fall, then traveling overland to either Del Rio, Tex., or Yuma, Ariz., where they surrender to U.S. border agents to begin the asylum application process.

Maria Victoria Gonzalez, who arrived in Miami with her husband and two children in January after flying to Nicaragua, described the current exodus from Cuba as “a stampede to Managua,” referring to the Central American country’s capital. “Almost everyone from the younger generations is leaving,” she said.

The Cuban migration boom has been largely overlooked amid a record-breaking overall influx under President Biden. CBP arrests along the southern border reached a record 1.73 million during the 2021 fiscal year, and this year’s total is on pace to be even higher.

The arrival of so many Cubans is straining communities here in South Florida, while acting once more as a release valve for communist authorities facing potential unrest amid the worst economic crisis to grip the island in decades.

Michael Bustamante, a Cuba historian at the University of Miami, said the migration surge puts new pressure on the Biden administration to recast its strategy, having left in place most aspects of the “maximum-pressure” Trump administration approach that tightened U.S. economic sanctions. Street protests that flared in Cuban cities last July were viewed as a vindication of that strategy by former president Donald Trump’s supporters, Bustamante said, but now the tougher sanctions — combined with Cuba’s own economic failures — are supercharging emigration.

“People are getting out of Dodge rather than taking to the streets, which is clear evidence the maximum pressure approach doesn’t work,” Bustamante said. “This is not a win for U.S. policy and not a win for the Cuban people.”

According to preliminary data obtained by The Post, U.S. Immigration and Customs Enforcement (ICE) has only deported 20 Cubans in the past five months, and just 95 during the 2021 fiscal year. Authorities deported 1,583 Cubans in 2020, according to ICE data.

In a statement, the Department of Homeland Security said it coordinates with the State Department to hold “regular discussions with partner countries in the Hemisphere on migration related matters” and “continues to engage with foreign governments to improve cooperation with countries that systematically refuse or delay the repatriation of their nationals.” DHS did not respond to questions about specific Cuban government restrictions on the return of Cuban migrants.

About 125,000 Cubans arrived in 1980 during the Mariel boatlift, when the island’s ports and marinas were opened to allow U.S. vessels to pick up anyone wanting to leave. Another 30,000 Cubans reached the United States across the Florida Straits during the 1994 “rafter” crisis.

After that episode, U.S. officials agreed to increase family reunification visas and open a visa lottery system allowing 20,000 Cubans to legally emigrate annually. But those legal pathways were crippled after the State Department removed most consular staff from Cuba in 2017 after the unexplained “health incidents” that became known as Havana syndrome.

Cubans were required to travel to Guyana for visa processing, slowing the entire process and contributing to a large visa backlog.

The U.S. Embassy in Havana said Wednesday it is preparing to restart limited consular services in May, but only for parents of U.S. citizens.

The current volume of migration to the United States far outstrips potential legal pathways. In addition to the flights to Nicaragua, Cubans are also flying there through third countries including Panama. When Panamanian authorities imposed a transit visa requirement for Cuban travelers last month, protesters surrounded the Panamanian Embassy in Havana.

CBP records show about 75 percent of Cubans taken into custody along the Mexico border are adults traveling alone. Some Cubans acknowledge hiring smuggling guides to transport them through Mexico, while others say they rely on social media networks, choosing Del Rio and Yuma for their reputation as relatively safe and easy places to cross.

A smaller number of Cuban migrants, about 750, have reached the United States through other means over the past six months, including one cancer survivor rescued off the Florida Keys in late March on a windsurfing board.

Some Cubans are being released at the border with a form of provisional legal status known as humanitarian parole, but others are being referred to ICE or U.S. immigration courts to face deportation proceedings. U.S. authorities say they issue humanitarian parole on a case-by-case basis, but have not explained how they make those determinations.

Santiago Alpizar, an immigration attorney in South Florida, said he has gotten so many cases in recent months that he is no longer able to see new clients in April. They are recorded as having arrived illegally, meaning they don’t automatically qualify for the Cuban Adjustment Act of 1966 that allows Cubans to apply for a green card after a year in the United States.

“The majority of my cases now need to apply for asylum,” he said.

Alpizar — who fled by sea in the 1994 crisis — has been writing letters to Cuban American politicians urging them to reinstate the visa lottery as well as the family reunification program. Many of the Cubans heading for Nicaragua have been separated from spouses, children and other close family members for years with little or no access to a U.S. visa application process.

Oasis Peña, a community activist in Miami, said the massive new wave of Cuban arrivals is already putting a strain on agencies that work with migrants. At Integrum Medical Group, where she helps connect Cubans with social services, people begin queuing up the night before to sign up for benefits such as food stamps and legal assistance.

“There are so many people,” she said. “It’s humanly impossible to serve everyone.”

Peña, who arrived to the United States at age 14, has worked with migrants for three decades. “I have never seen this amount of people arriving through the border,” she said.

Gonzalez — who arrived with family in Miami in January — left the island days after Nicaraguan President Daniel Ortega, a longtime ally of the Cuban government, lifted visa requirements.

As a journalism professor in the central Cuban city of Santa Clara, Gonzalez, 36, said she earned the equivalent of around $100 per month. Her husband, an instructor of mechanical engineering, earned less. Their combined income was hardly enough to feed their two children, she said.

Their situation grew more precarious during the pandemic, as Cuba’s economy experienced its worst contraction since the collapse of the Soviet Union. Prices soared as Cuba’s leaders implemented a painful currency reform in early 2021. Lines to buy basic goods such as meat and cooking oil stretched for hours. And the government’s repressive response to the July 11, 2021 protests — when authorities handed down lengthy prison sentences — made it clear for many young Cubans that change was unlikely any time soon.

The Nicaragua route finally gave Cubans such as Gonzalez a route that seemed reasonably safe. With the help of her U.S. relatives, the family bought four tickets to Managua at $3,400 each — with demand so high, commercial and charter airlines are gouging travelers, according to migrants.

At the airport in Cuba, Gonzalez said so many people were boarding the flight that there was not a single free seat in the waiting area. Other passengers described selling all of their belongings — including houses and cars — to finance the journeys. Many had paid huge sums to purchase their tickets, with one couple paying $4,500 each.

No one carried heavy suitcases. When the plane finally took off from Cuba, some onboard clapped.

Gonzalez and her family arrived in the middle of the night and checked in at a hotel before embarking on a journey that would take a month to the reach the U.S. border. They took buses and taxis, stopping from time to time to rest and figure out their next steps. Gonzalez said they were never stopped or detained by Mexican authorities, nor asked to show their passports.

Along the trip, they told their children — ages 8 and 4 — that they were going to visit their grandfather in the United States, little by little revealing that they were about to embark on a new life.

The last leg of the journey was the one Gonzalez said she remembers most vividly. Though many are crossing at the Rio Grande, Gonzalez had heard stories of people drowning and was too afraid. Instead they decided to cross through the desert in Arizona.

They started around 9 p.m. with a group that swelled to 30 to 40 people. Her 4-year-old son was wearing tennis shoes with flashing lights. Someone told her it’d be best if she took them off, as they might attract attention. It was cold but he’d have to arrive to the United States shoeless. Her husband carried him on her back, while Gonzalez held her daughter’s hand.

Within 20 minutes, they were in Arizona, seated on benches next to the border wall. Patrol agents processed them and the other families with children first. They spent the next three days in CBP custody. Then they were released, catching a bus to Phoenix, then a flight to Miami.

Three months later, their daughter is now enrolled in school. They’ve applied for their son to join a prekindergarten program next year. “We know we have to start from zero,” Gonzalez said. “We are aware nothing is easy. But we are full of hope.”