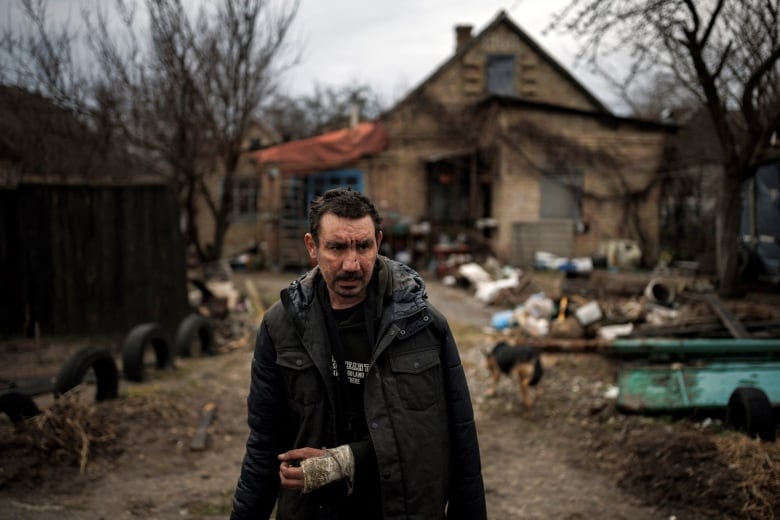 A driver’s-eye-view as a car weaves down a street strewn with bodies. Corpses burned almost beyond recognition. Bodies of men and women, some with their hands bound, half-buried in the dirt of what appears to be a mass grave.

These scenes of mutilation and death, posted to social media and rapidly shared many thousands of times, could hold crucial clues for investigators probing alleged war crimes by Russian soldiers in the Ukrainian city of Bucha. The mounting evidence of widespread civilian deaths in the city just northwest of Kyiv has incited global outrage and harsher sanctions against Russia, who began its invasion of Ukraine on Feb. 24.

In March, International Criminal Court prosecutor Karim Khan said he was opening an investigation into possible war crimes in Ukraine.

With just a simple search on platforms like Twitter, Facebook, TikTok and Telegram, investigators can access a “phenomenal” amount of information — often in regions they otherwise couldn’t reach due to fighting, McDermott Rees said.

But it takes more than just a tweet — or even thousands of them — to prove a war crime.

Those posts are only a starting point for investigators, who are also in a race against time, as social platforms’ moderators remove content that violates their policies — potentially deleting that evidence forever.

The use of video as evidence in war crimes prosecutions isn’t new.

Black and white footage, filmed by Allied troops as they liberated Nazi concentration camps, was used as evidence at the Nuremberg Trials in 1945.

Similarly, a video of a mass execution of Bosnian Muslim men in 1995 — part of the Srebrenica massacre, in which thousands of Bosnian Muslim men and boys were executed — shocked the world when it was revealed during the trial of former Serbian president, Slobodan Milošević, a decade later.

But legal experts say the near real-time access that social media offers is a game-changer.

“[In previous conflicts], you were often trying to find those rare pieces of video footage that might exist, or photographs that people had taken. And you might be going door to door, knocking on doors, literally, to try and capture that information,” said Alexa Koenig, executive director of the Human Rights Center at U.C. Berkeley School of Law.

“Today, with the prevalence of information posted to social media … it’s really finding the signal through the noise.”

Social media has already played a role in a handful of war crimes convictions under domestic laws in Germany, Finland, the Netherlands and Sweden, involving individuals who fought in Syria and Iraq, according to Human Rights Watch. In some of those cases, the criminals were photographed posing with the bodies of enemy combatants, and the photos were then uploaded to Facebook.

Online content has also been used as evidence in a limited number of cases at the International Criminal Court. But the conflict in Ukraine may be social media’s greatest legal test in a war crimes case, according to McDermott Rees.

Challenges of social media as evidence

Experts warn, however, that the sheer volume of social media content will create new challenges for those trying to make a legal case, and could even slow down the investigative process.

“It’s kind of like looking for a needle in a haystack made out of needles, because there are all these videos that claim to be of a particular incident, and it’s your responsibility and job to really wade through all of it,” Koenig said.

There are numerous investigative teams sifting through social platforms looking for clues, Koenig said, including Ukrainian prosecutors, foreign government agencies, and citizen groups like Bellingcat, with the help of artificial intelligence tools to scour, gather and analyze data, in hope that it could one day be used as evidence.

But, she adds, every photo and video first has to be cross-checked several ways.

Investigators will assess any metadata attached to images, such as the time, date and location it was created, she explained. They will analyze the source who uploaded it, and try to trace it back to its original creator. And they’ll also examine the image itself — comparing it with other photos and video, satellite images, and witness testimony, to try to corroborate any evidence it contains, Koenig said.

Evidence of war crimes, crimes against humanity in Ukraine but not genocide: Veteran investigator

“It’s clearly a war crime and indeed its breadth and depth suggest that there’s crimes against humanity as well,” said veteran war crimes investigator Bill Wiley. “There’s no evidence of genocide at this point.” 7:16

The quality of the images also matters. The rush to film and upload a scene of atrocities can lead to shaky footage, or video that misses key details, said Dalila Mujagic, a legal advisor with WITNESS, an organization that trains people to document human rights abuses.

“That sometimes compromises the substance or the potential for evidence that these videos [or] content might have.”

Social media companies face pressure from governments to swiftly remove violent and extremist content. Online giants, including Facebook, Twitter and Google, jointly pledged to step up those efforts after a shooter in Christchurch, New Zealand, live-streamed a deadly mosque attack in 2019.

But groups like Human Rights Watch say those takedowns can result in companies deleting evidence of war crimes, without archiving it, thereby potentially hampering future investigations.

Mujagic said those platforms need to recognize their responsibility as “social evidence lockers” and protect that data.

To date, “no company has done this successfully”, Mujagic said, adding that platforms face the difficult task of balancing graphic images against “making sure that the truth gets out,” while also ensuring  that even if videos are taken down, they can be preserved and accessed by the right people afterwards.

Koenig says companies have begun to work with human rights and other organizations to come up with solutions, but it’s unclear exactly how much of that content is currently being preserved.

“The challenge for them is always going to be the scale of what they’re grappling with, and a lack of clarity as to what actually constitutes an international crime and what might be evidence of it.”

‘Exploring ways to preserve this’

Meta, the parent company of Facebook and Instagram, told CBC News in a statement that in the case of Ukraine, it is “exploring ways to preserve this type and other types of content when we remove it in case it constitutes evidence of violations of international humanitarian law.”

For all the evidence accumulating on social media, both McDermott Rees and Mujagic emphasize that it’s an add-on — not a replacement — for more traditional evidence of war crimes, such as witness testimony.

“These are individuals who should have the opportunity to tell their story and to bear witness to the atrocities that they’ve seen. We must keep an eye on that and not lose sight of that when we get excited about the potential of social media for accountability.”