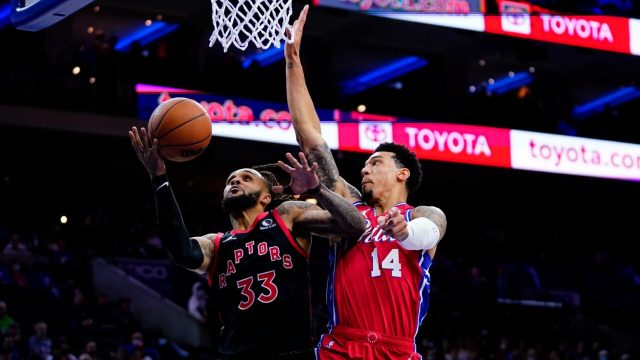 So much has changed since the last time the Toronto Raptors met the Philadelphia 76ers in a playoff series. but one thing remains the same: Joel Embiid is big, talented, and the kind of player that can win games and even a playoff series by himself, and almost everything the Sixers do depends on him.

And one other thing: The Raptors own him.

The first-round series between the fourth-seeded 76ers and the fifth-seeded Raptors will likely hinge on whether the incredibly gifted 28-year-old can have the kind of breakthrough moment the Sixers have been waiting for or if the Raptors can once again have head coach Nick Nurse’s organized chaos play out on the floor and leave Philadelphia fans and maybe Embiid in tears.

That was one of the lasting images from the Raptors’ epic seven-game, second-round series win in 2019, where Embiid found comfort on the burly shoulder of Marc Gasol, just moments after the big Spaniard had helped limit Embiid to just 37 per cent shooting over the seven games.

Embiid, who was the NBA’s leading scorer this season with a career-high 30.6 average and is a lock to finish in the top three of what is the closest MVP vote in years, is an even better player than he was three seasons ago, when he was merely magnificent.

It’s all part of the path for soft-shooting, 7-foot, 280-pounder, who goes by the nickname The Process, in reference to the Sixers’ extended tour through the draft lottery intended to yield championship-level talents like Embiid. But it has yet to deliver a trip to the Eastern Conference Finals, let alone a title.

“I think that as any of these great players in the NBA go on, each year they see a lot more repetitions of coverages, and they learn how to play them better and better as the games and repetitions go by,” said Raptors head coach Nick Nurse as his club regrouped Wednesday for the first of three practice days before the series opener on Saturday.

“I think he’s done a great job of a number of things: getting position, getting the ball, staying faced up more, he’s ultra-confident in every shot he takes, whether it’s a post-up or it’s an elbow or it’s a one-legged fadeaway or it’s a three point or a step-back three, whatever, he’s ultra-confident and shooting them. So that’s probably the biggest thing. There’s a wide array of faced up plays that he’ll make that make it hard to stop because he can shoot over the top of you.”

And if none of that works, Embiid led the NBA in free-throw attempts this season, where he converts at 81 per cent for his career.

And yet, compared to the rest of the league, the Raptors have enjoyed more than their fair share of success against Embiid.

The Sixers went 1-3 against the Raptors this season – including 1-2 in the games Embiid was active for – and are 4-7 against Toronto since Kawhi Leonard’s shot dropped in 2019.

It shouldn’t be this way. The 2018-19 Raptors ceased to exist about a week after the championship parade. Toronto’s tandem of all-defence big men, Gasol and Serge Ibaka, is long gone.

Last season the only resistance the Raptors could offer came in the form of Alex Len and Aron Baynes. This season Toronto didn’t even bother signing a traditional centre, the closest they have being Khem Birch, the 6-foot-9 journeyman from Montreal.

But the constant in all of Embiid’s struggles is the presence of Nurse and his coaching staff, who have shown the ability to draw up game plans to thwart the best players in the league with aggressive schemes that involve tremendous ball pressure to force mistakes – Embiid averages about four turnovers per 36 minutes against the Raptors, which is up from his more typical 3.6 rate.

Thad Young has only been with the Raptors since the trade deadline, but the 15-year veteran has quickly come to recognize the added value Nurse and his staff can bring.

“We have a phenomenal coaching staff,” said Young, who spent the first seven seasons of his career with the Sixers. “Like when I first got [to Toronto] and I was the first scouting report that we had, I was like, oh [crap], this is one of the best scouting reports I’ve ever seen.”

The added challenge this time around is that Embiid isn’t the Sixers’ only threat. Since the ground-shaking trade in March that saw the Sixers acquire James Harden, the Sixers superstars have been neck-and-neck with Brooklyn’s Kyrie Irving and Kevin Durant as the most potent two-man lineup in the league, as they have put up 122.7 points per 100 possessions, just behind the Nets duo’s 122.8.

“[Harden] is someone coming off the pick and roll that can shoot the three, that can attack and can pass,” said Raptors forward Pascal Siakam. “He can do everything and that makes it harder to cover Joel because it’s tough to help off James … [He] just makes Joel even tougher and we already know how great Joel is.

“Yeah, those two are definitely a tough matchup.”

But the Raptors may have a recipe for that also. Toronto won both of its games against Philadelphia with Harden and Embiid in the lineup.

Harden has shot just 8-of-24 against the Raptors while with the Sixers and Embiid hardly prospered either, shooting just 16-of-42 in the two matchups.

“It presents a lot [of problems] when you’re not guarding it the way we need to guard it,” said Young of the Embiid-Harden pairing. “[But] I think the way we guard it as a team puts us in a better position against them than other teams because of the simple fact of when they got screen and roll, we’ll usually have bigger active guys on both of those guys.

“We’re able to switch it and kinda keep Embiid from rolling behind and keep James from getting a direct line on the drive and then we try to send those guys to the help, we try to make sure that they play in crowds.

“[But] if we’re not executing the schemes, it’s not gonna work.”

But under Nurse and against Embiid – and Harden – for the most part the Raptors have executed the schemes well, with the one constant from 2018-19 forward being the Sixers star ending up on the losing end more often than not.