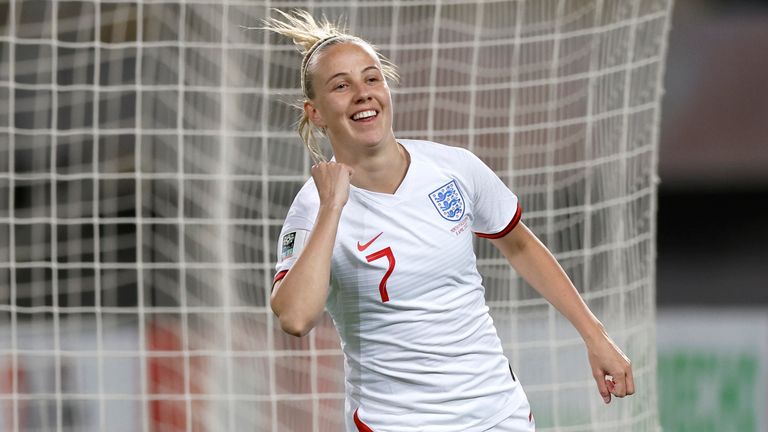 Beth Mead scored four goals and Ella Toone hit a hat-trick as England continued their run of scoring double figures in every qualifying away game with a 10-0 win in North Macedonia.

It took only five minutes for Mead to open the scoring, by which point the Lionesses had already passed by a couple of presentable chances, and they kept up their early intensity by storming into a 3-0 lead inside 25 minutes.

The visitors’ profligacy was all that stopped them adding more to their tally before Ellen White brought up her half-century of England goals – moving back above Harry Kane and into second place in the all-time scoring charts – before Mead added a fifth moments before the break.

If Sarina Wiegman’s one half-time request was for England to be more clinical, her desires were answered as Mead grabbed a quick-fire double, including her hat-trick, inside the first eight minutes of the second period, and Georgia Stanway made it eight soon after.

Another lull followed until Toone, who had grabbed her first before half-time added a quick-fire double to complete a hat-trick of her own 12 minutes from time, the latter a fine finish swept into the bottom corner from the edge of the area.

The Lionesses briefly thought they had added an 11th when substitute Nikita Parris nodded home from close range before she was denied by the offside flag, but another stroll to victory was already long over and a third consecutive 10-0 win on the road, following heavy wins in Luxembourg and Latvia, in the bag.

Despite finding the back of the net 10 times, something which even with the disparity in the women’s international game cannot be taken lightly, England could and should have scored more in Skopje, and were denied a bigger win only by their own profligacy.

That was the only blot on their copybook in an otherwise dominating, intense and persistent performance in the North Macedonian capital.

England registered 39 shots and created 11 clear-cut chances but with a better final ball, or a more measured finish, would likely have added to their tally on the night.

One player whose attacking output could not be faulted was Lauren Hemp, whose wondrous wing play made five of England’s eight goals before she was substituted on the hour.

Toone’s bright performance gave Wiegman food for thought with her hat-trick adding to a display of smart passing and movement in the number 10 role she will hope to occupy when the European Championships roll around in the summer.

Overall, no one could be too disappointed by the manner of England’s victory, which leaves them with an outside chance of qualifying for the finals on Tuesday against Northern Ireland if results go their way.

Wiegman expressed her satisfaction with England continuing their run of scoring double figures on the road in qualifying, but said she thought her side could have been more patient with their build-up play to hammer home their domination, which included 81.7 per cent of the ball over the 90 minutes.

She told ITV Sport: “We played against an opponent that, compared to us, isn’t great. But we have to make the game and speed up the game and that’s what we tried to do.

“We scored 10 which is nice. We created lots of chances and sometimes we should have been a little more patient. But if you score 10 goals, that’s just a good result.

“I think there has been a lot [of progress]. The way we want to play really comes across. The connection today, you could see compared to the first game in September.”

England Women resume their World Cup Qualification campaign away in Northern Ireland on Tuesday at 7.55pm.