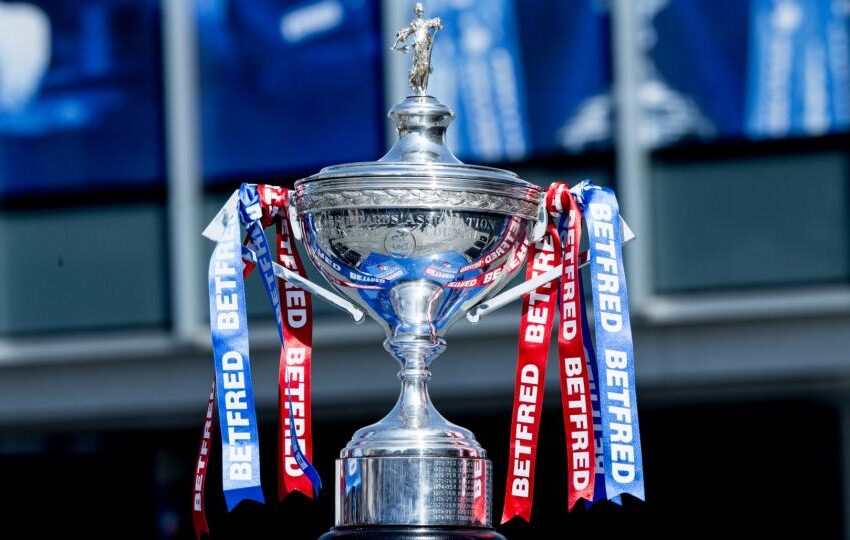 All attention in the build-up to the start of the 2022 World Snooker Championship at the Crucible is on Ronnie O’Sullivan.

He can make history at the tournament if he prevails as the six-time world champion will match Stephen Hendry’s modern-era record of seven titles.

O’Sullivan won the event most recently in 2020, having first won it in 2001, and he is No.2 seed for this year’s event, which begins on Saturday.

Full schedule: when does Ronnie O’Sullivan play at the 2022 World Snooker Championship?

O’Sullivan begins his tilt at title No. 7 on Saturday, April 16.

He is due to play at 2:30pm UK time in the first session of his first-round match, which will be best of 19 frames.

The match will finish with a second session on Sunday from 2.:30pm, with the winner being the first to 10 frames.

His opponent is unseeded David Gilbert, who made the semi-finals of the World Championship back in 2019. Gilbert has one ranking title to his name – the 2021 Championship League.

If O’Sullivan wins, his second-round match would be against either No.15 seed Mark Allen or qualifier Scott Donaldson.

It will be played over three sessions as a best-of-25 frames, starting on April 22 at 10am. It would then be 7pm on April 22 for the second session, with the match concluding on April 23 from 2:30pm.

A quarter-final involving O’Sullivan brings up 2005 winner Shaun Murphy as a possible opponent. That would start on April 26, concluding a day later.

Four-time champion John Higgins and 2010 winner Neil Robertson are potential semi-final opposition. That will be a best-of-33 frames match, running over four sessions between April 28 and April 30.

Top seed Mark Selby and 2019 winner Judd Trump are in the other side of the draw, and O’Sullivan cannot meet them before the final.

If O’Sullivan does make it to the final for an eighth time, it is a best-of-35 contest that will start on May 1 and finish on May 2.

In the UK, there will be coverage on BBC television across BBC One, Two and Four in the UK.

Via the BBC, the action can also be followed when not on a TV channel on either the iPlayer or the Red Button option, with it also possible to view the matches on the BBC website.

Eurosport will also be screening coverage on their channels in the UK, and matches can also be streamed on Discovery+, with the latter option also available to European viewers.

DAZN will have streaming coverage in the US and Canada.

Australian viewers will have the Matchroom Live app as their option for streaming coverage from Sheffield.

How many times has Ronnie O’Sullivan won the World Snooker Championship?

Six times in the past has O’Sullivan been champion. He beat John Higgins 18-14 in 2001 to claim his first.

The sixth success came in 2020, when Kyren Wilson was despatched 18-8.

Has Ronnie O’Sullivan ever lost in the first round of the World Snooker Championship?

Yes. On four occasions O’Sullivan has had to pack his bags and leave South Yorkshire after the first round.

Most recently in 2019, it was an amateur player James Cahill who caused the shock. He upset O’Sullivan with a 10-8 success.