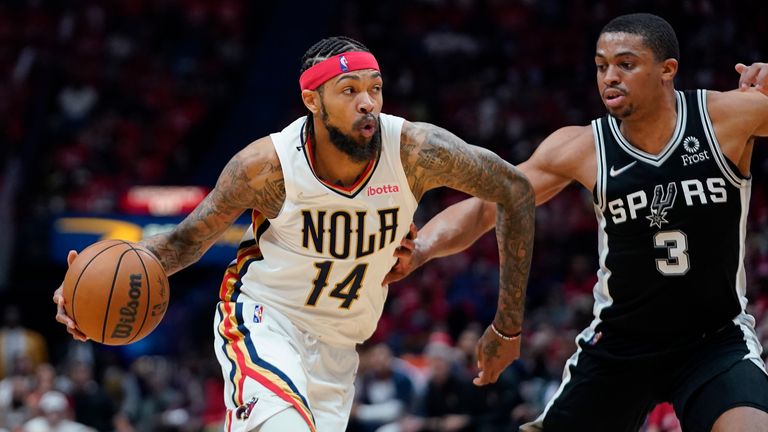 CJ McCollum got New Orleans going early and Brandon Ingram took over late to send the Pelicans to Los Angeles for a chance at the final playoff spot.

McCollum scored 27 of his 32 points in the first half to carry the young Pelicans to a 113-103 win over the San Antonio Spurs on Wednesday night. New Orleans will face the LA Clippers on Friday night for the eighth playoff seed.

“He was great,” Pelicans coach Willie Green said of McCollum. “He set the tone early. He understood the moment, and it sort of calmed the rest of the guys down. We just got the ball to him and he made play after play, score after score, and then the rest of the guys that just started to feed off CJ.”

“I was just trying to be locked in and aggressive early,” McCollum said. “The playoffs is a lot of antics, a lot of momentum plays, a lot of back and forth. You’ve got to be stable and mentally locked in to withstand a certain level of (chaos). … There’s going to be a lot of winning in our future.” “The three best players for New Orleans all played great, and if that happens, you’re going to lose,” Spurs coach Gregg Popovich said of his team’s inability to contain McCollum, Ingram and Valanciunas. “We stayed in it and got back in it, but then we made the same mistakes as we did in the first three quarters – non physical defense.”

“We’re just playing for each other,” Valanciunas said of combining for 81 points with McCollum and Ingram. “When things struggle, we need somebody to slow the game down, which (CJ) does. Next step is on Friday.”

Popovich said his young team, which averages 25 years in age, learned a lesson the hard way.

“It’s the playoffs, and you’ve got to be into people,” Popovich said. “The grunt is important. Ingram scored two in a row right in the middle of the lane with no one even touching him. It’s a great lesson for our guys.”

The Pelicans, who finished ninth in the West after starting the season 3-16, will play at the Clippers with the winner facing the top-seeded Phoenix Suns in the first round. New Orleans beat Los Angeles in three of four meetings this season.

Ingram hit a pair of soft jumpers in the lane and Valanciunas added a short jumper to put New Orleans back on top, 103-91.

Devin Vassell led San Antonio with 23 points. Dejounte Murray had 16 points, but he went just 5 of 19 from the floor while being shadowed by Pelicans rookie defensive stopper Herb Jones.

“You have to take the good and bad and learn from it,” Murray said. “We had guys not shoot well, starting with myself. They were physical. I ain’t making no excuses.”

After Ingram went to the bench with three fouls 5:17 before halftime, McCollum carried the Pelicans offensively. In a 14-4 run over the final 3:36 of the half, McCollum made two 3-pointers and pierced the San Antonio defense for two finger-roll layups on strong drives into the lane as New Orleans built a 61-50 lead.

McCollum made 10 of his first 12 shots, including 2 of 3 from long range, despite drawing consistent double teams.

Pelicans: While F Zion Williamson missed the entire regular season with a fractured right metatarsal, the former No. 1 overall pick was doing 360-degree dunks in pregame before sliding back into his street clothes. Coach Willie Green said he was not looking for Williamson to return until the beginning of next season.