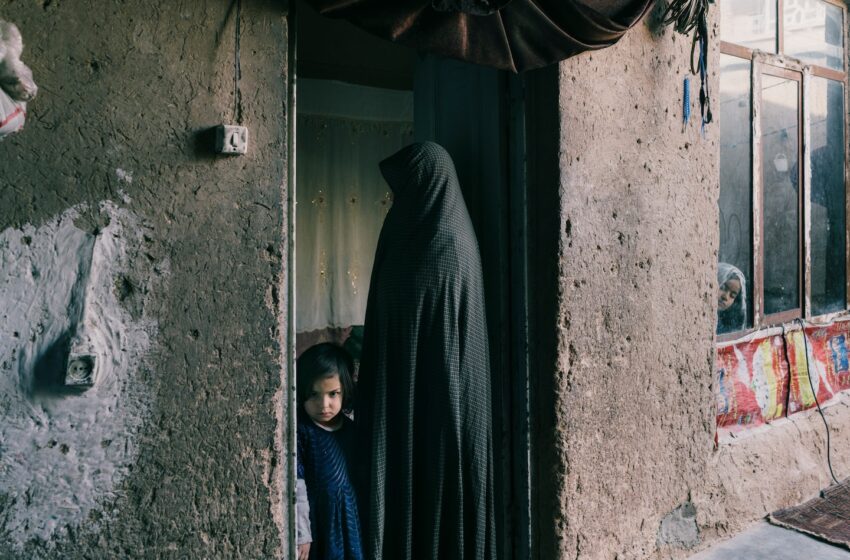 HERAT, Afghanistan — Without work, Khangul Sadiqi found himself heavily in debt. His children often went to bed hungry, shivering in their unheated home. And so, six months into Taliban rule, he began to see his three girls through the prism of survival.

“Rather than all of my family members die, I decided it’s better to sell one of my girls to save the rest,” Sadiqi said.

The daughter he sold is Zahra. She is 3 years old. Her buyer is a wealthy man in search of another wife. He is 50.

As a deepening humanitarian crisis grips Afghanistan, fueled by a confluence of economic, financial and political shocks worsened by the government’s collapse in August, children such as Zahra are increasingly bearing the brunt of the growing poverty. While there is no comprehensive data available, the United Nations, aid agencies and local officials say they are receiving credible reports of a rise in child marriages and sales of babies for adoptions as Afghans seek ways to cope with their spiraling lives.

“It’s happening all over and in different social economic spheres,” said Cornelius Williams, head of child protection for the United Nations Children’s Fund. “What we are seeing is a commodification of girls and child marriages becoming more of a transaction. Children in general are becoming an economic commodity in the household.”

Along Afghanistan’s ‘highway of death,’ the bombs are gone but suffering has deepened

Child marriage has long been prevalent in many Afghan communities. But the Taliban takeover, the subsequent plunge of the economy and banking system, and other stresses have “exacerbated the problem,” Williams said. The age of girls sold into marriage is dropping, a trend that could persist as long as the Taliban prevents girls from secondary school education in most areas.

The shift, after two decades of Western presence brought education and opportunities for countless Afghan women and girls, raises questions about their identity and future.

“The evidence shows that the more girls are surviving and completing school, the less chances of them getting married early,” Williams said. “Families were believing that their girls should have a profession. The value they had on their girls was not as marriageable commodities but as professionals. This is rolling it back. It is important that we get these girls back to school.”

Culturally, too, there are signs of disintegration. Traditionally, when a child is given in marriage, she remains with her family until her early teens. Today, workers on the ground for UNICEF and other aid agencies are looking into reports that girls are moving into their husbands’ households at much earlier ages.

Zahra’s buyer agreed that she could remain with her parents until she turned 15, Sadiqi said. That’s when he planned to marry her. He would be 62 by then.

But when the buyer arrived last month with a $100 down payment, he changed the agreement, Sadiqi said: He wanted to take the child across the border to Iran right away. When Sadiqi, 35, asked how he would explain Zahra’s absence to his wife, the buyer replied:

“If any of your relatives ask, tell them you lost her on the street, and you could not find her,” Sadiqi recalled.

But without his knowledge, his four other small children were nearby. And they were listening.

‘If you give us one of your kids, I will give you the money’

The family’s life had always been a struggle. For years, Sadiqi pushed a wheelbarrow, carting vegetables and other goods from one place to another. He earned about $2 a day. His wife, Parigul, earned the same amount, washing other people’s clothes. When business was bad, they relied on local and Western aid agencies for assistance.

But last spring, their life began to slide. Sadiqi was struck with excruciating back pain that forced him to stop working, he said. A doctor recommended surgery he could not afford. In August, as the Taliban swept across Afghanistan, he crossed into Iran to find a less strenuous job and send money back to his family. But Iranian police deported him, he said.

When he returned to Herat, the Taliban was in control of the country. And by then, Parigul, too, had lost her income: All her clients had vanished.

“Lots of people left because of the Taliban,” she said. “Those who had money fled to Iran or some other country.”

The group’s return to power touched off a domino effect of suffering. First came sanctions, the freezing of central bank reserves and loans, and the suspension of development aid that once accounted for 70 percent of government spending. A banking crisis and cash crunch followed, shuttering businesses and investment and spiking unemployment.

Prices are rising, and millions struggle to purchase food and pay rent. Clinics have closed as health workers haven’t been paid their salaries. Adding to the turmoil is one of the worst droughts in a quarter-century. As the economy collapses, 24.4 million Afghans — 55 percent of the population — need humanitarian aid, a 30 percent increase from last year, according to the United Nations.

The toll on children, in particular, is devastating. The health system has crumbled, and the United Nations estimates that 1.1 million children under 5 could become severely malnourished this year without proper treatment. As many as 131,000 children could die of hunger if no action is taken, according to a U.N. report.

In a recent survey of 1,400 Afghan households, the charity Save the Children reported that a third of families had lost all their household income since the Taliban seized power. Nearly a fifth of families have been forced to send children out to work, with more than a million believed to have joined the workforce. The data also showed a large surge in families going into debt to buy food, the charity said.

Mazullah Rahimi couldn’t wait for his child to grow up and work.

The 31-year-old former government soldier was unemployed with two wives and eight children, including Bibi Asma, their 1-year-old daughter. He was in debt for nearly $1,600 to various people. The electricity was cut, and food was scarce.

He called a wealthy man, Saifoor, he had known for years and asked him for a loan.

“He told me we don’t have any children,” Rahimi recalled. “If you give us one of your kids, I will give you the money.”

Rahimi sold Asma for roughly $800. While there is no data available on such “adoptions,” community leaders said they are increasingly seeing cases of childless couples with means purchasing babies from desperate parents.

Rahimi’s wife Tajber, her eyes filled with tears, recalled explaining her departure to Asma’s siblings, who couldn’t understand why she left with a strange man in a taxi. “I told them they took your sister, and she will not be with you anymore,” she said. “You have to live with this.”

In her room, there is a baby-size yellow dress with white frills, a reminder of the child she lost.

Days later, Saifoor acknowledged buying Asma in a telephone interview. He spoke on the condition that only his first name be used.

“My wife and I love Asma very much,” he said. “In the early days, we thought of changing her name, but at my wife’s request, we still call her Asma.”

By October, Sadiqi’s family was in dire straits. He was jobless, and his back pain had increased. Parigul was asking neighbors if she could wash their clothes for food. But they, too, were facing economic hardships.

“I prayed to God, ‘Please kill me,’ ” Sadiqi said. “Death is better than this life because my children have no food.”

He spoke inside their unheated home in a poor enclave of this western city. Zahra was playing with a plastic bangle, trying to get the attention of her siblings. They were all listening solemnly to their father speak.

In November, the buyer entered their lives. He was an acquaintance from their village in the province of Badghis, roughly 100 miles north of here. A former government employee, he visited their home on three occasions, each time leaving about $10 to help them buy food, offering them more assistance if they needed it.

During Afghanistan’s harsh winter, many are forced to choose between food and warmth

Sadiqi asked him for a loan in December. That’s when the man’s intentions became clear: He offered to buy one of Sadiqi’s three daughters.

It took Sadiqi two hours to make his decision.

“At that time when he told me, I was shocked,” Sadiqi said. “But then I started to look at my situation.”

He offered one of his two older girls — 7-year-old Nozdana or 10-year-old Shaida. But the buyer had set his sights on Zahra.

“He said, ‘I want the youngest because she doesn’t know anything,’ ” Sadiqi recalled.

In January, the buyer returned with the $100 down payment — and the demand to take Zahra to Iran in the next three months.

As he took the money, Sadiqi didn’t see Zahra’s four siblings playing a few feet away. They heard the entire conversation and ran inside to tell their mother. Parigul walked out, shaken.

“She was crying,” Sadiqi said, as his wife nodded. She told the buyer to leave.

When she returned inside, the buyer took Sadiqi aside and told him to pocket the $100. He would send the remaining $400 when he returned from Iran. (The Washington Post could not reach the buyer in Iran.)

“He said, ‘Just keep your daughter awhile,’ ” Sadiqi said. “I will be back for her.”

With the $100, Sadiqi bought flour, rice, oil and other necessities. It was also an effort to convince his wife that selling Zahra would be beneficial to the family. But Parigul refused to give up Zahra. She told Sadiqi’s mother, Zibida, about the sale.

“I urged my son not to sell my granddaughter,” said Zibida, 60. “I will never forgive you, I said.”

But Sadiqi continued to pressure his wife to agree to the sale, stressing their poverty. By then, their 12-year-old son, Ismael, was on the street, searching for plastic to heat their house.

Finally, she delivered an ultimatum, she recalled.

“If you sell her, I will kill myself,” Parigul vowed.

Her words finally sunk in.

Sadiqi called the buyer. “I want to cancel our deal,” Sadiqi recalled telling him. “A suicide could happen in my house.”

The buyer reminded him that he had already paid the down payment.

“I cannot sell my daughter to you,” Sadiqi recalled telling the buyer, saying he would find a way to pay him back the $100. “I regret what I did.”

But he did not accept the offer, Sadiqi said. “He still thinks he owns my daughter.”