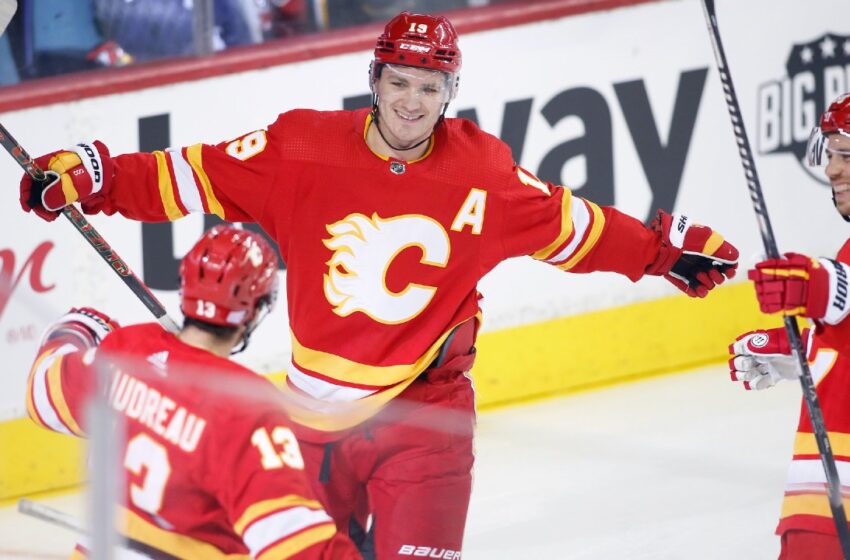 The Flames need Markstrom in top shape. Will Sutter find a way to get him rest?

SEATTLE – The growing calls to give Jacob Markstrom some rest down the stretch appear close to being answered.

Darryl Sutter has been talking all season long about having a number in mind regarding how many minutes his star netminder will be capped at.

The Flames coach finally revealed those numbers in a one-on-one interview with Sportsnet.ca just before the Flames finished their very first three-game sweep through California.

Sutter, who insists his goalie cap revolves around minutes, not starts, has started Markstrom 56 times this season, totalling 3,328 minutes.

Should Markstrom play the equivalent of 62 games, he would reach 3,720 minutes.

That leaves him with 392 minutes to play, which equates to six-and-a-half more games.

With 11 games left in the Flames’ schedule, that means Sutter would like to start Vladar four or five more times, if not more. Close to an even split, which would make many fans happy.

With two more back-to-back scenarios remaining on the Flames’ schedule, it shouldn’t be hard to get Markstrom that many more nights off.

Then again, when it comes to Sutter’s past, there have been no rules regarding resting netminders.

Keep in mind, he played Miikka Kiprusoff in 74 games one year, and started Jonathan Quick 68 and 72 times in consecutive seasons.

He’ll sit Markstrom if he feels the goaltender truly needs the rest, but will balance the decision based on being comfortable the backup is capable of helping maintain momentum going into the playoffs.

His 31-save performance in Thursday’s win should have bolstered the coach’s confidence in the 24-year-old, as the two goals he did surrender both came from fortuitous bounces off an opponent in front of the net.

Sutter said he’ll rely on information from Markstrom to help determine his feelings on the concern many fans have surrounding the possibility he could be burning out, as some feel he was late in the season as a Canuck.

“You’ve got to balance the schedule and how he’s feeling,” said Sutter. “Once I have a comfort with our conversation, he’ll tell me. That’s the way it works. You also talk to Barbs (goalie coach Jason LaBarbera) about how we see it.”

Markstrom’s issues late in his time in Vancouver came following consecutive seasons with 60 appearances, followed by a 43-game season in 2019-20.

His career-high is 3,599 minutes, which is just under the cap Sutter has set for him.

Trick is, finding any goalie as competitive as Markstrom who will be forthcoming about the need or desire to sit a few extra games.

“I feel okay,” said Markstrom, 32, when asked how he was feeling following his second-straight win Tuesday in Anaheim. “It’s all about winning this time of year. It’s a lot of hockey and we’re having fun. It’s fun winning again, consecutive nights. I had a little rough stretch but now we’re good.”

That “rough stretch” saw him let in a few questionable goals as part of a three-game losing skid before leaving for the road.

The soft goals became a big talking point as they have been a rarity this season for a man who should be getting strong consideration as a Vezina finalist.

Suffice it to say, he’ll be key to any plans the Flames have of making a splash this spring.

His importance underlines why so many are worried about entering the playoffs with their star netminder in top shape.

So go ahead and take your guess when, and if, Sutter will indeed manage Markstrom’s minutes a little closer.