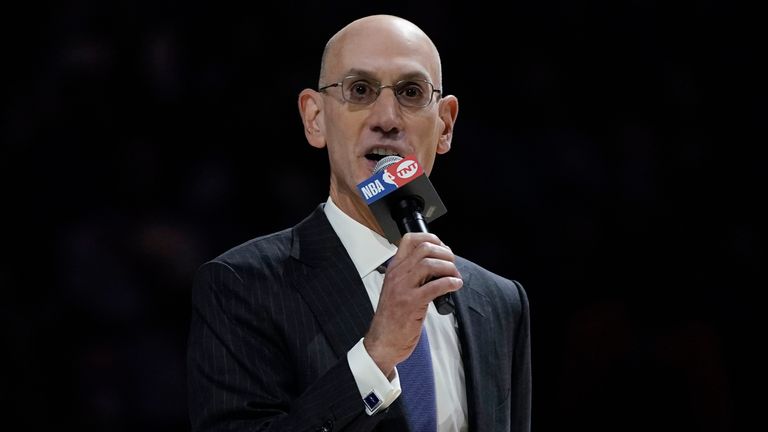 NBA Commissioner Adam Silver has admitted that the league’s powerbrokers are concerned over the number of top players sitting out games.

Silver met with reporters to summarise the agenda and developments at the league’s two-day Board of Governors meeting.

He remains concerned about the need for top players to appear in more games, saying it’s something both the league and National Basketball Players Association need to address, perhaps by adding more incentives or trimming the 82-game schedule.

“If we have too many games, that’s something we should look at as well. It’s something, as we sit down and we’re looking at new media deals and looking at a new collective bargaining agreement, we will be studying,” Silver said.

“There wasn’t any banging of the table or anything like that. From my discussions with players, they recognise it’s an issue, too. The style of the game has changed in terms of the impact on their bodies. I think we’ve got to constantly assess and look at a marketplace going forward and say, what’s the best way to present our product and over how long a season?”

Silver spoke on Wednesday afternoon after the league’s Board of Governors met in person over two days, which he said was the first time the full board did that in person for quite some time, and went on to say that the NBA will continue to look at other incentives to ensure the season remains competitive.

“I’m not standing here saying I have a great solution. Part of the issue is injuries. One of the things we have focused on at the league office and we’re spending – we had begun to spend a lot of time on pre-pandemic – are there things we can do in terms of sharing information, resources around the league to improve best practices, rehabilitation?

“The other way we can get at it, in terms of player participation, is creating other incentives. The play-in tournament, I thought, was a beginning of creating renewed incentives for teams to remain competitive and be fighting for playoff position. It might be through in-season tournaments and changes in format where we can get at it.”

Now in its third season, the play-in tournament seems likely to return. Teams who finish in the No 7-10 spots in each conference will play next week for the No 7 and 8 seeds, and the league believes it has made the latter stages of the regular season more competitive with clubs either trying to get into it, or rise above it and qualify automatically in the top six spots.

After a taste last season and a second edition quickly approaching, the Play-In apparently is here to stay. Not only does it offer a playoff berth to two more teams in each conference, but also seems to have hushed talk of tanking for better draft-lottery odds while energising teams to climb at least to sixth place just to avoid a one- or two-game elimination.

“We’re pleased with it,” Silver said. “There may be a need to tweak it additionally. We’ll see how it goes this year, but I think it’s going to become a fixture in this league.”

The NBA plans to keep its next All-Star Game in Salt Lake City, despite its opposition to Utah’s ban on transgender youth athletes playing on girls teams.

The Utah Jazz are set to host the event next February but there was speculation the NBA could take it away because of what the team called “discriminatory legislation.”

But Commissioner Silver confirmed the event will stay put as planned.

“There was no discussion over the past two days about moving the All-Star Game from Salt Lake City, and we do not anticipate moving the game,” Silver said.

The NBA pulled the 2017 All-Star Game out of Charlotte because of its opposition to a North Carolina law known as HB2 that limited anti-discrimination protections for lesbian, gay and transgender people. The game was played in New Orleans before the league returned to Charlotte in 2019.

Silver said the circumstances are different this time, adding that the league didn’t want to be in a position where it risked having to keep moving its events as similar laws were becoming more common. When Utah’s GOP lawmakers pushed through their ban last month, it joined 11 other states with similar legislation.

“In the case of HB2 in North Carolina, I think it was our collective view, we working with the Hornets, that we could have an impact on that legislation,” Silver said. “I think in the case of what’s happening in Utah right now, that bill is established.

“At least our initial view, working with the Utah Jazz, is that we’re going to have to find a way to work in that environment and create an inclusive environment for our game, rather than take the position that we have somehow an independent ability to change the minds of the voters of Utah in this.”

Almost at the same time as Silver was meeting with reporters, the Philadelphia 76ers were updating their injury list in advance of Thursday night’s game in Toronto.

On the list was this mention: “Matisse Thybulle (ineligible).”

The immediate reaction around the NBA to “ineligible” was a presumption that Thybulle, the Sixers’ on-ball lockdown defender, had run afoul of Canada’s rules against unvaccinated visiting players. Those rules could force Raptors playoff opponents to participate without key members of their rotations, up to and including stars for as many as three or four games in a best-of-7 series.

A recent story reported that Philadelphia and Boston declined to respond when asked about the vaccinated status of their rosters. Miami and Milwaukee told ESPN that their teams are fully vaccinated.

It isn’t expected that Canada will lift its restrictions by the start of the NBA postseason. And Silver addressed the topic as if that status quo will hold:

“We have no choice but to operate under the laws of the jurisdictions in which we play. Those rules are well known to all players, and for any player who chooses not to get vaccinated, they know they are at risk of not being allowed to play in Toronto. That’s the facts that we’re all going to have to operate under.”

Brooklyn Nets guard Kyrie Irving gained international attention with his decision not to get a COVID-19 vaccination, which ran afoul of a New York City ordinance. That prevented him from playing home games in Brooklyn or as a visiting player at Madison Square Garden in Manhattan, as well as in Toronto. New York lifted that restriction last month, enabling Irving to finally play at Barclays Center on March 27 – his first home game (and 23rd overall), but his team’s 75th of the season.

Silver said the Competition Committee is looking at what’s known as “take” fouls that have become common, spoiling fast breaks and potential dunks, He indicated a new rule could be coming, perhaps in July.

“As we’re seeing sort of a pretty dramatic increase in take fouls, we don’t think it’s a great part of our game,” Silver said. “International basketball has another way of getting at it, but that is something that potentially we’d like to tweak.”

Look for the NBA’s Competition Committee to tackle the pertinent rules when they meet with the BOG in July at the annual Las Vegas Summer League.