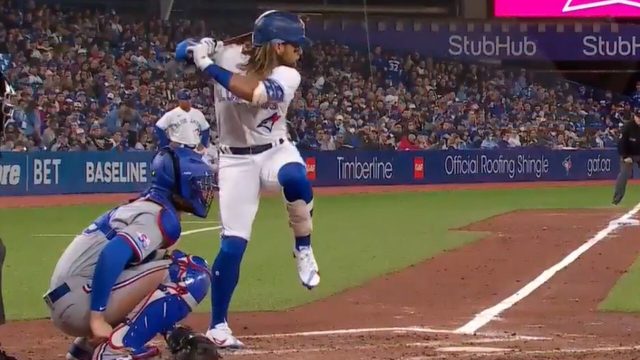 TORONTO — Bo Bichette hit a game-tying home run and Santiago Espinal had a go-ahead double as the Toronto Blue Jays held off the Texas Rangers 4-3 on Saturday.

Bichette was 2 for 4 with two runs for the Blue Jays (2-0) in front of 43,386 fans at Rogers Centre. Espinal had an RBI double as a pinch-hitter for a second straight game.

Kevin Gausman gave up eight hits in his regular-season debut for Toronto, but limited Texas to three runs and struck out five in five innings of work.

Relievers Trevor Richards, Yimi Garcia, Tim Mayza and Jordan Romano of Markham, Ont., closed the door the rest of the way. Romano earned his second save of the season.

Corey Seager and Nathaniel Lowe each had two hits and RBI for Texas (0-2).

Dane Dunning struck out four but allowed five hits and three runs over five innings in a no decision. Brett Martin took the loss for the Rangers, with Spencer Patton and Matt Bush also coming out of the bullpen.

Gausman agreed to a US$110-million, five-year deal with Toronto on Nov. 30 after a 14-6 season with the San Francisco Giants.

The right-handed pitcher had a 2.81 earned-run average over 192 innings in a major-league-best 33 games started. He also struck out 227.

He picked up where he left off from last season in Saturday’s first inning when he struck out former Blue Jays infielder Marcus Semien and induced two lineouts to get through the heart of Texas’s batting order.

Springer scored on Guerrero’s hit and Bichette crossed home after Lourdes Guerriel Jr., hit into a fielder’s choice for an early 2-0 lead.

Gausman’s mastery of the Rangers lineup continued in the second with back-to-back strikeouts of Kole Calhoun and Andy Ibanez.

Semien doubled home Jonah Heim in the third as Gausman gave up three straight hits to start the inning.

Seager then grounded out to third, allowing Brad Miller to score before Nathaniel Lowe’s single drove in Semien for a 3-2 Texas lead.

Gausman settled in after that, retiring six batters in the fourth and fifth innings before he was replaced by Richards on the mound.

Bichette tied it up again in the fifth, hitting a 425-foot rainbow shot to deep left field.

Espinal, pinch hitting for second baseman Cavan Biggio, restored Toronto’s lead in the sixth inning with a double to deep left-centre field to score Raimel Tapia from first base.

Romano induced a ground out by Ibanez to start the ninth. Bichette then backed him up with a highlight-reel grab of a line drive by Willie Calhoun for the inning’s second out.

Heim then flew out to deep centre field to end the game.

Romano’s 25th consecutive save between this year and last tied a Blue Jays record.