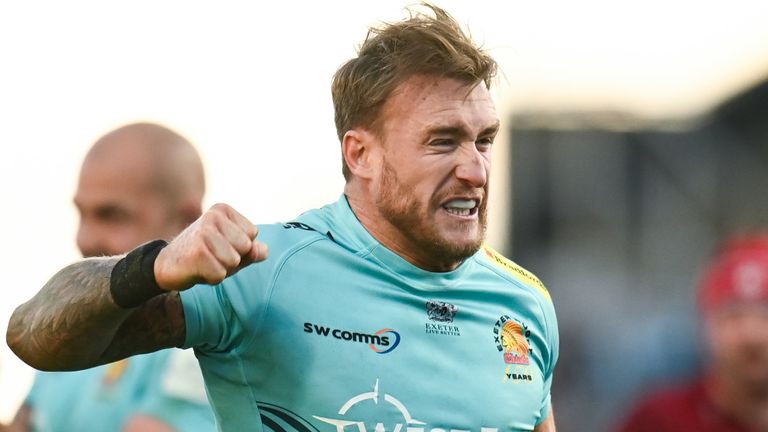 Exeter toil to Round of 16 win vs injury-hit Munster

Exeter Chiefs toiled to a 13-8 Champions Cup round-of-16 first-leg success vs Munster at Sandy Park, but the Irish province remain in the tie after a gallant defensive performance.

Full-back Stuart Hogg scored a try and a drop-goal in the victory, with back-row Jacques Vermeulen grabbing Exeter’s second try in a clash they largely dominated in terms of possession and territory.

Munster scored through a Shane Daly try and Ben Healy penalty, but will be disappointed themselves not to have registered more points – particularly when facing 13 men for over eight minutes after Olly Woodburn and Patrick Schickerling were both sin-binned in the second half.

They refused to wilt in the face of intense pressure, though, with openside flanker John Hodnett particularly outstanding, and Keith Earls putting in a try-saving tackle late on which could yet prove vital ahead of next week’s return leg at Thomond Park.

Having twice been counter-rucked in the opening minutes, Munster got into the game when lock Fineen Wycherley ended Exeter’s first attack near the 22 when he jackalled to win a penalty.

Exeter hooker Jack Yeandle repeated the same breakdown trick as Wycherley before him to end Munster’s first promising attacking spell around the 22 too, before the hosts hit the front just six minutes in.

A flowing move after a Jack Maunder quick-tap saw Henry Slade pass out the back for Tom O’Flaherty to gallop into space down the right, before the elusive wing passed on for Hogg to touch down in the corner.

Joe Simmonds struck the difficult conversion wide, but an Alex Kendellen knock-on and Healy forward pass in successive Munster attacks saw them fail to build any momentum in response.

A superb breakdown turnover won by Hodnett halted Exeter’s next surge forward, with defences on top and neither side able to breach the respective lines and spend time attacking in the opposition’s 22.

On 24 minutes, Exeter turned down the chance to kick for points from close range in favour of a five-metre lineout, and it proved the wrong decision when a dominant maul drive saw the ball lost forward by Yeandle after outstanding defensive work by Conor Murray.

Exeter came again as Munster struggled to clear their lines into the wind, but more magnificent defence – Damian de Allende and co forcing a choke tackle maul and turnover – kept the Chiefs out.

Buoyed by their defensive efforts, Munster’s most incisive attack of the half followed, with wing Daly chipping and chasing before full-back Mike Haley stepped through into the 22, but 10 phases of build-up came to nothing when Jeremy Loughman gave up a penalty at the breakdown.

Another penalty against Munster at the ruck – this time for not releasing in defence – invited Exeter back into the 22, but once more the hosts could not break through as Harry Williams knocked on in the face of more resolute defending.

A Chris Farrell half-break almost saw Munster away down the right, but yet again they were pinged at the breakdown as Niall Scannell went off feet – referee Pierre Brousset deeming it necessary to warn Munster skipper Jack O’Donoghue about repeat infringements.

In the very next phase of play, Munster were then reduced to 14 when replacement back-row Jack O’Sullivan was penalised for slowing the ball down in midfield.

Simmonds kicked to touch again instead of adding points via the boot, and with two minutes of the first half to go a second try finally arrived via flanker Vermeulen, with Munster’s stretched rear-guard unable to repel a wave of close-range pick-and-go carries.

Simmonds’ conversion veered wide, leaving the score 10-0 at half-time, but the second period began with waves of Exeter attack on the Munster line – only a remarkable O’Donoghue turnover under immense pressure seeing Munster avoid further concessions before being restored to 15 players.

A skewed De Allende clearance kick meant Munster remained under pressure, but a phenomenal Murray breakdown turnover – again with the visitors on their own line – saw them survive again.

An Earls high tackle on Sam Simmonds as the Exeter No 8 made a break saw the hosts back into the Munster 22, but the visitors first stole the ball, counter-rucked Exeter off their next possession and then Hodnett won a breakdown penalty to hand Munster their first spell in the hosts’ territory in the second half on 54 minutes.

Munster hammered at the line, and having forced a penalty with Exeter coming offside, Healy kicked over their first points on 56 minutes.

Hodnett won another penalty defensively soon after, in an incident which saw Chiefs wing Woodburn subject to a TMO review and sin-binning, and fortunate to avoid a red card for a clear-out to the face of Scannell.

With Munster attacking at pace, Exeter were shown a second yellow card two minutes later as replacement prop Schickerling was penalised for playing the ball off feet near the try-line.

The Irish province kicked to the corner to set up an attack vs 13 defenders within the Exeter 22, but conceded a hugely costly penalty at the maul for obstruction as a guilt-edged chance was lost.

Another penalty against Munster at the lineout saw Exeter with a lineout chance of their own within moments as Slade produced an enormous kick from hand, but Munster ensured the Exeter rolling maul was held up.

From the ensuing goal-line dropout, however, Hogg executed a scintillating drop-goal from distance to add three more points to the scoreboard.

Munster responded almost immediately as Daly jinked over for their try after Slade had knocked on while attempting to intercept a pass in midfield – the Chiefs centre would have been under the sticks for a try of his own had he held on – but Earls picked up and sprinted forward, with Daly then too quick for Hogg and stepping inside O’Flaherty.

Healy pulled the conversion wide to leave Munster five points adrift, but they looked to be in for a second try when replacement scrum-half Craig Casey dived for the line with the visitors still facing 13 – a TMO review proved inconclusive as to whether the ball was grounded, but Munster would surely have scored had they shipped play wide.

Having been on penalty advantage, countless Munster phases followed, but Exeter – like Munster for much of the contest – produced an emphatic spell of defence to concede no points and earn a turnover.

Back up to the full complement, Exeter looked likely to seal the tie when Woodburn sprinted forward into space down the right with three minutes to go, but opposite wing Earls made a sensational tackle to stop a certain try.

The rest of the contest was played out in the Munster 22, as Exeter kicked to the corner twice in search of a try, but firstly lock Thomas Ahern stole lineout possession, before a tense and absorbing match was ended as Munster held the Chiefs up in the final play, ensuring they remain firmly in the tie ahead of the return fixture.