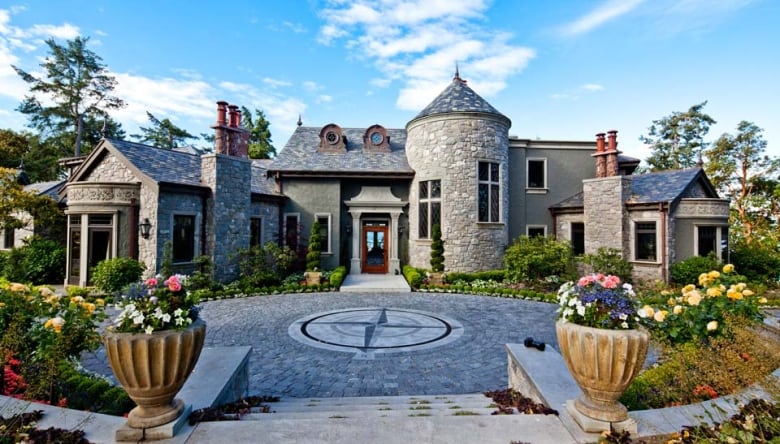 Russian billionaire is behind mansion that housed Harry and Meghan, leaked files show

It’s been an international enigma for the last two years: Who really owns the lavish Vancouver Island estate where Prince Harry and Meghan wintered in 2020 as they reportedly hashed out their plan to step back from official royal duties?

Is it the Russian-born billionaire who several media outlets linked to the property? Is it Canadian mining magnate Frank Giustra, as (erroneously) reported by the New York Post’s Page Six?

CBC and Radio-Canada found the answer, and it does indeed involve a Russian, but it wasn’t easy — it took an international leak of tax-haven data, access to a company’s internal records and intense research. All that, experts say, shows once again just how opaque Canada is when it comes to assets like real estate and who owns it.

“It is very easy for criminals around the world to be laundering their dirty money in Canada and buying real estate,” said Kevin Comeau, a lawyer and financial transparency expert. “And we have no way of knowing who they are or [the] ability to chase their money. “

From B.C. to Caribbean to Channel Islands

There is no suggestion of criminality surrounding the Mille Fleurs mansion in North Saanich, about 30 kilometres up island from Victoria. But it certainly shields its owner well.

For starters, unlike with most properties in B.C., you can’t find it in the provincial land registry.

That’s because the mansion isn’t registered as a single property, but is part of a stretch of oceanfront land on the Saanich Peninsula owned by a corporation called the Towner Bay Country Club. Each homeowner on the land has shares in the country club corresponding to their lot.

The club’s records are not public. But CBC/Radio-Canada was able to review an internal spreadsheet that tracks club owners’ property tax. It lists a British Virgin Islands company called JEMC Management as the owner of Mille Fleurs.

Corporate records in the British Virgin Islands don’t disclose a company’s shareholders. So the ownership trail would normally stop cold here, but for a stroke of luck: The Pandora Papers — the huge cache of leaked tax-haven records obtained by the Washington-based International Consortium of Investigative Journalists, and shared with CBC/Radio-Canada — shows that JEMC Management is owned by another company, registered in the Bahamas, called Orland Properties.

Orland, in turn, is owned by a trust called the Andromeda Trust, formed under the laws of the Bailiwick of Jersey, a tiny tax haven off the coast of France. The trustee is a company whose sole officer lives in Cyprus.

But whose money is behind that?

Two years ago, as speculation about who was really hosting Harry and Meghan hit fever pitch, a name that kept emerging was billionaire venture capitalist Yuri Milner, arguably the highest-profile Russian-born investor in Silicon Valley.

Milner is reported to spend time with celebrities on a superyacht — a boat also called Andromeda — and he knows Canadian music producer David Foster, whose wife knows Meghan Markle from their school days.

Foster, a 16-time Grammy winner, even gave an interview to Britain’s Daily Mail about the mansion in 2020, where he said he’s been friends with the mansion owner for years. The music producer said that, although Milner wasn’t the owner, he had helped Milner rent the house “about five or six years ago… for a short time.”

Milner-run investment funds took early positions in Facebook and Twitter before those companies went public, stakes that generated mega profits. But as journalists revealed in 2017, about half the capital for his firm’s investments in Twitter came from VTB Bank, the No. 2 bank in Russia, which is majority-owned by the state.

“It’s probably one of the two banks that fund most connected government officials and oligarchs,” said Jamison Firestone, who practised business law in Moscow for nearly two decades and has become a leading figure in the global campaign against Russian state corruption. He called VTB “a slush fund” for the Russian government.

Milner’s Facebook play, meanwhile, was partly seeded with money from a company that had itself obtained hundreds of millions of dollars in loans from a subsidiary of the Russian state energy company Gazprom, the same media investigation showed. An oligarch named Alisher Usmanov ran the Gazprom subsidiary and eventually obtained a stake in Milner’s Facebook investment.

Milner has said he was just doing business, seeking funders and making investments. While VTB Bank and Gazprom are under sanctions in Canada, the U.S. and the EU, that didn’t start until 2014 — three years after he raised the money.

A spokesperson for Milner told CBC that the VTB funding was paid back that year, and that Milner has not raised capital from Russian investors since 2011. Usmanov was only added to Canada’s sanction list this March. Milner has never been sanctioned, and isn’t generally considered to be an oligarch.

In early April, CBC asked Milner whether he directly or indirectly owns the estate where the royals spent Christmas and New Year’s in 2019-2020.

The reply came from Alice McGillion of New York-based reputation management firm Rubenstein: “We can officially confirm, as we have consistently done [in] the past, that neither Yuri Milner nor any family member nor any entity affiliated with him or his family owns Mille Fleurs mansion on Vancouver Island or any other property in Canada.” McGillion referred CBC to the interview given by music producer Foster.

However, documents found by CBC News in the Pandora Papers leak reveal that the Andromeda Trust — the Jersey-constituted entity atop the chain of offshore companies leading down to the Mille Fleurs property — didn’t always go by that name.

Until February 2016, it was called the Yury Milner Trust (variations in the English spelling of Russian names are common).

A letter written by a lawyer for Milner in 2018, found in the leak, explains the trust’s origins: “The person who contributed the assets,” it says, “was Yury Milner.”

The letter continues, “The potential beneficiaries of the Andromeda Trust include charities, relatives and friends of Yury Milner.”

Another record says that before 2015, “Yury Milner exercised control over” a series of companies including JEMC Management, which bought the Mille Fleurs mansion.

CBC News went back to Milner with these findings. The response this time was quite different.

McGillion sent another statement, asking that it be attributed to an unnamed “trust spokesperson.”

The statement admitted that Milner’s trust, funded by him, bought the mansion in 2013. It acknowledged that, in fact, Milner himself was a beneficiary of the trust at the time. And it reiterated that Prince Harry and Meghan’s stay was arranged by David Foster.

The statement explained this all by saying, however, that Milner and his wife decided in 2013 to pledge to give away the majority of their wealth to charity. The next year, Milner had himself removed as a beneficiary of the trust he’d created, in favour of newly formed charitable foundations that the statement didn’t name. In 2018, all his relatives were also removed as possible beneficiaries, the statement adds.

He is therefore no longer “affiliated with” the mansion, the statement said.

It also confirmed that Milner has a similar trust arrangement for the 107-metre superyacht Andromeda — a vessel he has until now denied owning, but has a knack for being spotted partying and vacationing on. The statement said he is not “affiliated” with the yacht, either.

Firestone, the former Moscow lawyer, said it’s a legal distinction without much of a difference.

“If you have the exclusive use of something, you basically have all the benefits of owning it without having to be legally owning it,” he said. “So yes, he may not be the owner, but he may very well be the ultimate beneficiary, which is basically the same thing for all this stuff.”

WATCH | See the B.C. property where Harry and Meghan stayed in 2020:

Meghan Markle hideout? This B.C. property believed to be where royals are

Mille Fleurs, a mansion in North Saanich, B.C., is believed to be where Prince Harry and Meghan vacationed and where the duchess is currently staying 0:35

‘We don’t have the tools right now’

The mystery of the Vancouver Island mansion shows how thorny it can be to find out who really owns property in Canada, which can make it immensely difficult to confront the scourge of money laundering in Canadian real estate, or to confiscate the riches of Russian oligarchs, transparency expert Comeau said.

“We don’t have the tools right now in order to be finding, let alone seizing, those assets. You can’t seize them until you identify them and connect them back to those Russian oligarchs.”

In a Canadian first, B.C. enacted a public transparency database for property that’s supposed to be fully operational in November.

Meanwhile, the federal and provincial governments have been in discussions since 2019 on setting up registries to track the real owners behind corporate entities like companies and partnerships. Justin Trudeau’s Liberals originally promised it by 2025, but amid the fresh urgency of the unprecedented sanctions against Russia and a number of oligarchs, Finance Minister Chrystia Freeland promised in her budget speech last week to bump that up to 2023, at least for federally incorporated companies.

Responding to a question from Radio-Canada last week, Freeland said that while it will be difficult to also get every province to agree to adopt what’s known as beneficial ownership transparency for provincially registered corporations, it is “really important” for democracy and the economy.

“My hope is that we are in a moment where there is a real national consensus,” she said. “We need to know what money is flowing into assets in Canada.”