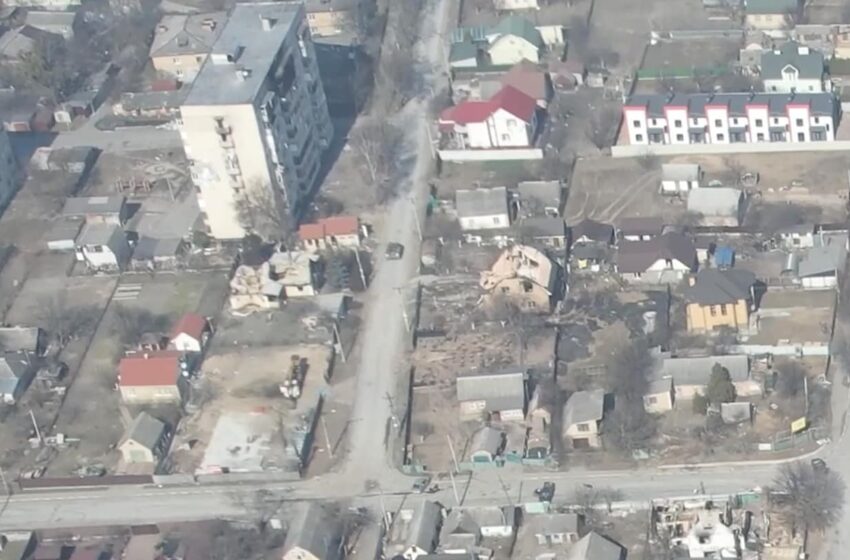 Drone videos captured over several days in late March show military vehicles used by Russian airborne units near at least eight bodies lying along a street in Bucha, a suburb northwest of Kyiv.

The time frame overlaps with previously published videos showing armored vehicles firing on civilians. These new videos further confirm that Russian military occupied this intersection when Ukrainian civilians were shot at and killed.

The six videos, recorded by a person known to be affiliated with neo-Nazis, were obtained by The Washington Post and first reported on by Meduza, a Russian news outlet banned by the Kremlin from operating in the country.

After Russian forces pulled back from the area around Kyiv in late March, videos of bodies along Yablonska Street spread on social media. Kremlin-backed media quickly denounced them, claiming Russia was the target of “an elaborate hoax” staged to implicate it in war crimes. The Post verified the authenticity of several of the videos from Bucha.

The growing body evidence of the brutality leveled against Ukrainian civilians by the Russian military brought swift condemnation from the international community. Congress voted almost unanimously to end normal trade relations with Russia, with President Biden signing the bills into law April 8. The European Union said it would ban imports of Russian coal beginning in August, and the United Nations voted to remove Russia from the U.N. Human Rights Council.

Based on metadata and available satellite imagery, The Post determined that this most recent set of videos were taken after March 19. The Post compared the appearance of destroyed vehicles, dead bodies and damage to buildings along Yablonska Street in the drone videos with their appearance in images from Planet Labs and Maxar Technologies. In satellite imagery captured on March 19 destroyed cars are not visible, but they are in photos taken on March 21.

The armored vehicles seen in the video were identified by experts as Russian BMD-2 and BTR-D, almost exclusively used by Russian airborne units, also known as the VDV. Ukraine’s armed forces once operated a small number of these vehicles but they’ve largely been wiped out, according to Amaël Kotlarski, an expert in infantry weapons at defense intelligence provider Janes.

“Only the VDV operates BMDs in the Russian Armed Forces,” said Kotlarski, who identified an armored vehicle hidden behind a fence as a Russian BTR-D. “The pike nose is the biggest giveaway.”

Sergey Korotkikh, the Azov Battalion commander who distributed the videos, did not respond to a message from The Post. On Telegram, he shared a message that praised him for releasing the video footage. The administrator of Korotkikh’s official Telegram chatroom, who gave his name as Drew, confirmed that Korotkikh gave the footage to Meduza.

The Azov Battalion is a highly skilled militia unit fighting against the Russian invasion of Ukraine. It is controversial for its far-right nationalist ideology and acceptance of white supremacists within its ranks.

A spokesman for Korotkikh who identified himself as Denis said Korotkikh was “not in town” and unavailable for comment. He did not respond to further questions. Korotkikh said in a Telegram post on Monday that he had been at Ukraine’s border with Belarus.

Meg Kelly contributed to this report.