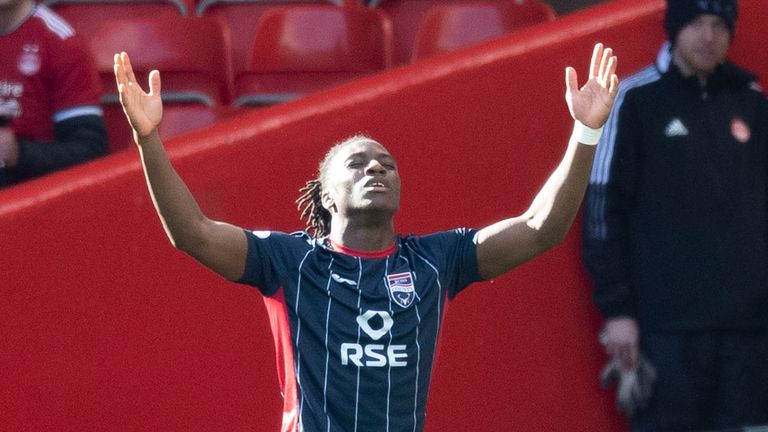 A late Joseph Hungbo penalty saw Ross County snatch a last-gasp place in the cinch Scottish Premiership top six as they recorded a 1-0 victory that consigned Aberdeen to a bottom-six finish for the first time in nine seasons.

With the carrot of that top-six place in front of them, though reliant on results elsewhere, the Dons made two changes from their draw at Dundee with Marley Watkins coming into the starting XI along with Funso Ojo.

County were unchanged after last week’s 1-1 draw with Hearts.

Despite what was at stake, neither side turned up for the first half, with neither goalkeeper forced into a save in the opening 45 minutes.

It was the 25th minute before either side registered a chance of note and Ross McCrorie really should have had the Dons in front.

Vincente Besuijen kept the play alive after Connor Randall had cut out a Watkins cross and the winger teed up McCrorie, who blasted the ball over the crossbar from 12 yards.

Watkins was involved again three minutes later as he won a free-kick that Lewis Ferguson shipped wide of the near post from 20 yards.

And the hosts came close with another effort before the break, but David Bates’ header from Jonny Hayes’ deep free-kick was easily held by Ross Laidlaw.

Lewis Ferguson came closest for the home side when he clipped the post with a curled effort five minutes after the interval, but the second half was again a fairly quiet affair.

County left-back Jake Vokins sent a half-chance high over the crossbar shortly after, while – at the other end – Hayes saw his flicked header fly over.

The visitors had stood up to Aberdeen’s attacks and looked dangerous on the break and were perhaps unlucky not to win a penalty when Regan Charles-Cook looked to be clipped by substitute Jack MacKenzie.

A combination of goalkeeper Laidlaw and defender Alex Iacovitti kept out the largely-subdued Christian Ramirez as he met a Connor Barron cross.

But Ross County were awarded a spot-kick when Hayes was penalised for a handball a yard inside the Dons area, and after a delay while Aberdeen remonstrated strongly at the award, Hungbo stepped up to blast the ball high to Joe Lewis’ right.

The home side stepped up the pressure as they searched for a leveller, but they would ultimately be frustrated.