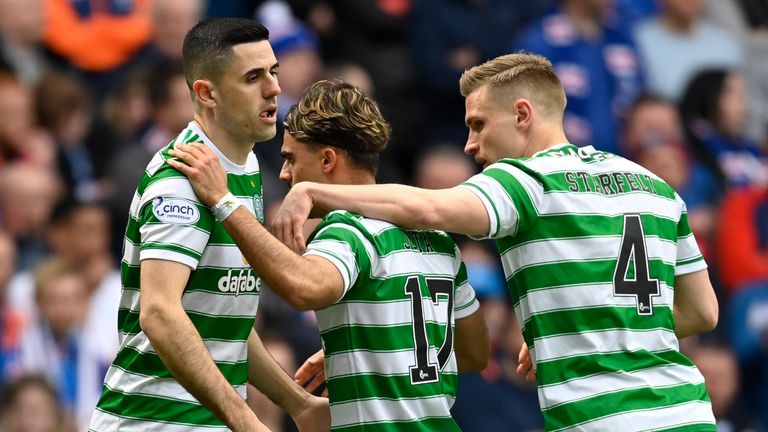 Postecoglou: Celtic will not become complacent in push for title

Ange Postecoglou is confident there will be no complacency from his Celtic players despite moving six points clear of Rangers in the Scottish Premiership.

Celtic came from behind to beat Old Firm rivals Rangers 2-1 last weekend to move further clear of their nearest challengers, leading to suggestions the title race is all but over.

But Postecoglou insisted if any of his squad possessed that mindset then it would become immediately apparent as he prepares for the visit of St Johnstone this weekend.

“We want to be playing our best football at this time of the year, irrespective of who we’re up against, and that’s our ambition.

“If any kind of that sort of thinking creeps into anybody, they’ll get left behind and they’ll really stand out in this environment. At this point in time no one is doing that.”

Postecoglou had a rocky start to his time at the club, who lost three of their opening six top-flight fixtures, but they now have their sights set on another domestic treble this season.

Asked whether keeping his players focused on the task at hand, rather than on what they could accomplish in the next couple of months, was a problem, the Australian was unequivocal in his response.

Highlights of the Old Firm match between Rangers and Celtic

“If I had to worry about those things right now, we wouldn’t be in this position,” he said.

“Maybe I’m not a great barometer of mood swings, I kind of keep to myself – maybe they’re partying in there, I don’t know, maybe they’ve got disco balls and they’re dancing around. Unlikely, I’d say.

“After round six we knew we had to be perfect. If we were worried about consequences of games or looking too far ahead we would have tripped ourselves up well before now.”

Celtic will look to take another step towards the league title against opponents who are battling for survival.

The 11th-placed Saints have earned seven points from their last three matches but they have lost to Celtic on all three occasions this season and are winless against the table-toppers in 22 attempts.

“We go into every game thinking the opposition are going to be at their best,” Postecoglou added.

“We don’t go in there thinking they’re going to be more desperate in this game than they may be in the following week. Once you prepare yourself in that manner it means our focus shifts.

“At this stage of the season, every game has got an edge on it, irrespective of who you’re playing against. What we know is that if we are at our best, we’re hard to stop.”

The manager confirmed striker Kyogo Furuhashi would “100 per cent” be available for Saturday’s game while James Forrest remains out with a leg muscle injury.