Former prime minister Ehud Olmert on Thursday filed his list of defense witnesses to the Tel Aviv Magistrate’s Court in a defamation lawsuit the Netanyahu family filed against him for calling them “mentally ill” in interviews.

The suit seeks NIS 837,000 ($261,000) in damages for Olmert’s “obsessive efforts to harm their good name in public, out of jealousy and deep frustration.”

According to Channel 12 news, the list includes Miriam Adelson, the widow of Sheldon Adelson, a longtime ally of former prime minister Benjamin Netanyahu, who according to the document, can attest to various events in which she was present and foresaw “behaviors and expressions,” from which she concluded that the Netanyahu couple suffered from alleged “mental disorders.”

However, the document also stated that some of the names appearing on the list refused to testify, and not all of them were even contacted by Olmert or his defense team. Even more peculiar is that the former prime minister, his wife Sara, and their oldest son Yair also appear on the list.

In February, the court rejected a request by Olmert for the Netanyahus to undergo a psychiatric evaluation. 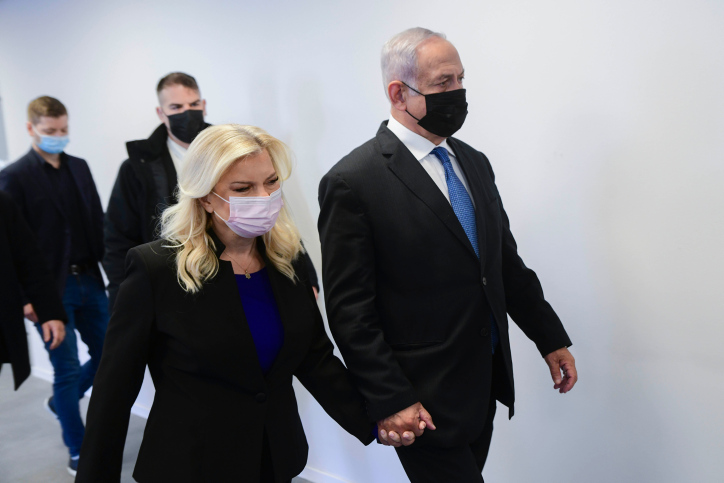 Former prime minister Benjamin Netanyahu and his wife Sara arrive for a court hearing on their lawsuit against former premier Ehud Olmert, at the Tel Aviv Magistrate’s Court on January 10, 2022. (Avshalom Sassoni/Pool)

Olmert’s request also sought access to “any relevant documents” about the Netanyahus’ mental health. The request had been seen as a longshot by Olmert’s lawyers that was unlikely to have been approved.

The court said that the request could be a fishing expedition seeking evidence that would retroactively prove Olmert’s claim, and could also serve to embarrass the plaintiffs in an attempt to deter them from pursuing their suit.

The court has ordered the Netanyahus to answer some of the questions in a questionnaire sent by Olmert, but not questions concerning their mental health, accepting their argument that such questions were inappropriate.

In January, Olmert rejected out of hand the idea that he could apologize to the Netanyahus, arguing that he was expressing a widely held opinion. In interviews prior to the suit, he had said: “What is irreparable is the mental illness of the prime minister, his wife, and his son,” referring to Yair Netanyahu. “They are in need of psychiatric treatment.”

Neither Olmert nor Netanyahu is a stranger to court.

Olmert preceded Netanyahu as Israel’s prime minister, ending his term before being formally indicted on corruption charges. He was convicted of fraud in 2014 and served 16 months of a 27-month prison sentence. 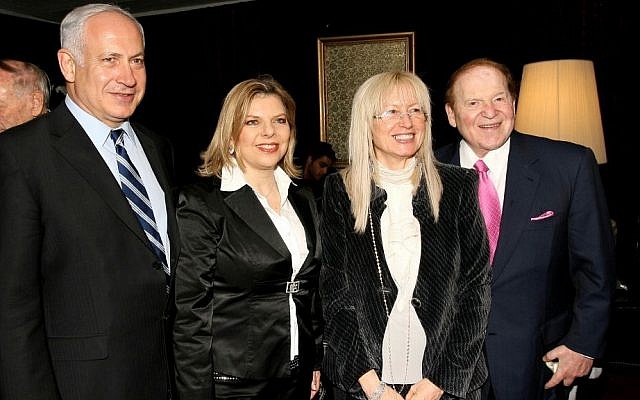 American billionaire Sheldon Adelson (R) and his wife Miriam meet then-head of the opposition Benjamin Netanyahu and his wife Sara Netanyahu at the Israeli Presidential Conference in Jerusalem. on May 13, 2008. (Anna Kaplan/Flash90)

Netanyahu denies all allegations against him, and says the charges were fabricated by a biased police force and state prosecution service, overseen by a weak attorney general, in league with political opponents and the media.

Netanyahu and his family have also been involved in several libel cases in recent years, both as defendants and as plaintiffs.