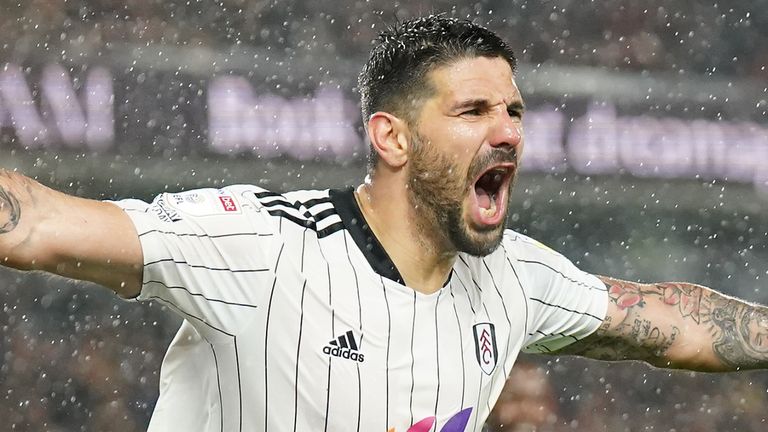 Mitro edges Fulham past Boro and one step closer to PL

Aleksandar Mitrovic’s 38th goal of the season moved leaders Fulham 17 points clear of the Sky Bet Championship’s play-off zone as they claimed a 1-0 win at Middlesbrough.

The Cottagers, on course for an immediate return to the Premier League, secured yet another victory, with Marco Silva’s men now 11 points clear of second-placed Bournemouth.

The Serbian’s header with 17 minutes remaining proved enough to knock Boro out of the top six.

Middlesbrough, who announced during the half-time break that the “people of Teesside” had donated £225,000 to help those in need in Ukraine courtesy of the club’s share of the gate receipts for the recent FA Cup tie against Chelsea, sit two points shy of Sheffield United and Nottingham Forest above them.

With Boro looking for a Riverside record ninth straight home win to climb up to fifth, it was a blow that highly-rated winger Isaiah Jones was missing.

It was always going to be a tough challenge for the home side to achieve that target against a team charging towards the top flight, but that did not stop them from looking to create.

Even though Middlesbrough had plenty of the ball in the early exchanges, Fulham’s quality in possession and ability to use the width of the pitch gave Chris Wilder’s men plenty to think about from the off.

Had it not been for a tame finish from Mitrovic following a Jonny Howson error, or some fine defending by Anfernee Dijksteel to thwart Fabio Carvalho, the leaders might have been ahead.

And with 23 minutes on the clock Mitrovic had the first clear-cut chance after Fulham turned defence into attack, with a hint of controversy too.

When Matt Crooks dived in to Harrison Reed in the Fulham half, the latter rolled around in agony while visiting boss Silva questioned why there was no foul and Middlesbrough played on.

After the Boro attack broke down, Reed hopped to his feet and ended up crossing into the area for Mitrovic to head low and goalkeeper Joe Lumley gathered.

Middlesbrough responded and a quick counter-attack ended with Howson curling from distance into the arms of goalkeeper Marek Rodak.

Shortly afterwards, Crooks’ first-time effort from Marcus Tavernier’s cross looked like testing Rodak but Tim Ream’s boot managed to direct the ball over the crossbar for a corner.

After the break, Fulham were quickest out of the blocks and Bobby Decordova-Reid came within inches of opening the scoring when his outstretched boot turned Kenny Tete’s low delivery wide of the far post.

But as the rain poured down at the Riverside, the noise levels lifted when Andraz Sporar forced Rodak into a fine stop down to his right on the hour.

Then in the 73rd minute the prolific Mitrovic headed Fulham in front with a fine glancing header from Harry Wilson’s free-kick after Crooks had conceded a free-kick.

There was still time for substitute Josh Coburn to head inches wide from Marc Bola’s cross and Duncan Watmore to fire over from close range for Middlesbrough during a frantic finale.

What the managers said…

Middlesbrough’s Chris Wilder: “I am extremely frustrated. We were well in the game from the off, especially in the second half. I am a bit disappointed. We turned the ball over too cheaply first half. It seemed we lacked a bit of belief to go toe-to-toe with the best team in the division. We did second half, the goal against was a poor one. It was a poor challenge from Matt Crooks, got booked, and our prep was about where Mitrovic gets into the middle of the goal and we have not blocked that run for him to score.

“We were on the back foot then, whereas up to that point we were on the front foot and I felt we would go on to win at that point rather than lose, I don’t know how. Fulham are the best team by a distance, smashed everyone all season home and away. You don’t go through the season going perfect but the consistency they have shown has been incredible. Pats on the back we went to the end, but there is a reason why teams win divisions because they come away on a wet and windy northern night and get the result they want.”

Fulham’s Marco Silva: “In four days we had a derby in London at QPR and away in Boro. We have six points, two clean sheets, and the feeling is really good. Our standards are high. I have told them we have to celebrate this win and smile because we achieved a massive result here with the heart and organisation needed. The Championship is like this. The feeling, the environment inside the dressing room, is really good but we know we want to celebrate more in the weeks ahead. This is a massive step towards what we want.

“I don’t like to talk about ifs, I prefer to keep working hard and win matches until the moment comes. We will do our best to achieve it. We will fight for it and fight to be champion. Now is not the moment to talk about it. Knowing the quality Boro have, I knew it would probably be the toughest game we have this season. Boro are strong at home, there is always a fantastic atmosphere behind them. But my players deserved it in terms of our togetherness and team spirit.”