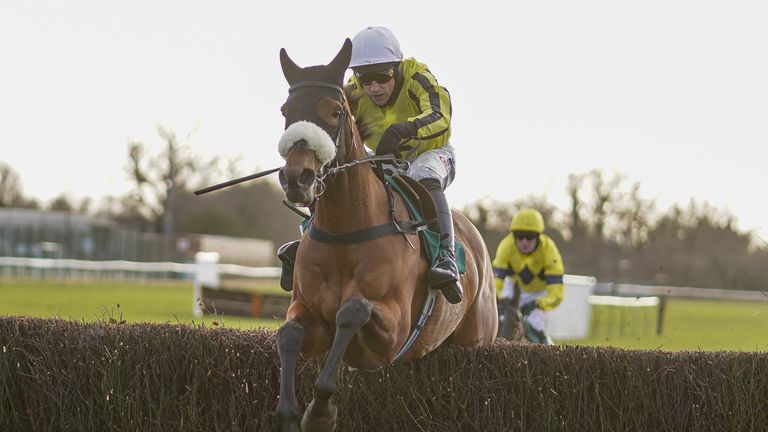 Fakir D’Oudairies is back to defend his title in the Marsh Chase over two-and-a-half-miles at Aintree on Friday and is a warm favourite to do so.

It is not as if winning this Grade One two years running is a rare thing – five others have done it before – but Fakir would become the youngest, at seven, to do it.

In a race littered with smart types, Joseph O’Brien’s chaser is officially the highest-rated on 164 but only by a solitary pound from Allmankind and Funambule Sivola, with Captain Guinness (the only other Irish challenger) and Sceau Royal on 162.

Was in grand form in the autumn when he put up a very classy performance under top weight here in the Old Roan Chase over the same course and distance.

But his last two starts have been bitterly disappointing, returning a well-beaten favourite in the Peterborough Chase, before pulling up over hurdles at Fontwell.

This most likeable type would have to be in with a shout at his best but there is a question mark over him for the moment.

Very talented and consistent two-mile chaser who is a little short of top class and has been on the receiving end against the likes of Energumene, Shiskin and Chacun Pour Soi.

Received a timely confidence-boosting win in a Grade Three at Naas in February (gave Blackbow 7lb) and now steps up in trip for the first time. This may be what he needs now. Interesting contender.

All of his wins have been at around two miles, including in the Red Rum Handicap Chase here at last year’s meeting. He also ran well when fourth in the Grand Annual at Cheltenham last month.

Has tried this sort of trip on four previous occasions but with mixed results and the fact he is the lowest rated in the line-up here means he is easy to pass over. Usually ridden handily.

A worthy favourite, having taken this contest by an impressive 11 lengths last year. Unlike many of these, he will be racing over his optimum trip.

Fakir is a bit of an unsung hero because every time he comes over to the UK, he does himself justice, with form figures of 1422211.

His latest win in the Grade One Ascot Chase was hard work on the deep ground there (Mister Fisher and Saint Calvados both well below their best) but he showed how brave he was. Assuming he has recovered well enough, he looks the most likely winner.

Boasts a 50 per cent strike rate over fences with six wins from 12 starts, all of those wins coming over two miles, and has continued to improve this season, having ended last term with a fine second to Shishkin here in the Maghull Novices’ Chase.

Not the biggest, but a real trier and did his best as always when chasing home Energumene in the Queen Mother Champion Chase last time out.

Prior to that, he was too strong for Sceau Royal in the Game Spirit at Newbury, although Alan King’s star is now 6lb better for two lengths.

This will be his fifth try at around this trip but he does have a good second to First Flow (absent here) in the Peterborough Chase to show that he stays ok. A strong traveller who is sure to give a good account.

Another one who travels comfortably in his races and steps back up to this trip after a third to Funambule Sivola and Sceau Royal over two miles at Newbury in February. On the face of it, he needs to find more here but his stable was out of sorts at the time.

Beaten as a novice chaser by Allmankind at Sandown, he needs a career best to win this and it is interesting that Harry Cobden prefers Saint Calvados.

Nicky Henderson has won this a joint-record three times in the past (alongside Paul Nicholls) and even if Mister Fisher is a hard one to assess, he clearly was all at sea in the testing conditions at Ascot last time behind Fakir D’Oudairies.

Prior to that, he was most impressive against Eldorado Allen at Kempton to show what he can do when in the mood. I have really no idea what to expect from him.

Hosed up in the Greatwood Gold Cup at Newbury (soft) last time in what was a career best – and some.

That it came on his 15th start over fences has you wondering a touch but it has certainly earned him his place in this line-up as he was upped 10lb to 157 in the ratings.

Now he needs to find at least another 7lb to land a blow and assume that he’s allowed to repeat the lovely rhythm that he got into at Newbury. This is a different type of race and of course a rise in class.

The deep ground at Ascot last time found him out when he broke blood vessels. His run in the King George, when he failed to stay, showed that he still has plenty to offer and this trip would seem to be his optimum.

That said, in spite of a few near misses and very decent runs, he has yet to win beyond two-and-a-quarter miles and it is now over two years since pushing Min all the way in the Ryanair. He could bounce back but it is hard to know exactly what he has left.

An absolute model of consistency for Alan King who won this contest two years running in the last decade with Voy Por Ustedes.

There’s so much to like about Sceau as a racehorse as he is also such a trier. Take a look at his second to Funambule Sivola in the Game Spirit – he never gave up even if the task of giving away 6lb was just beyond him.

This will be his first try at this trip and maybe, just maybe, it might be what he needs these days. Mind you, he has been beaten in nine Grade One’s since winning the Henry VIII Chase as a novice in December, 2017. I wish him well.

A few of these have questions to answer over stamina, and two of those – Captain Guinness and Sceau Royal – are trying this intermediate trip for the first time. I think both could go well, especially the Captain.

However, Fakir D’Oudairies, as the defending champion, is an obvious selection but Funambule Sivola will give him plenty think about and is the each-way suggestion.