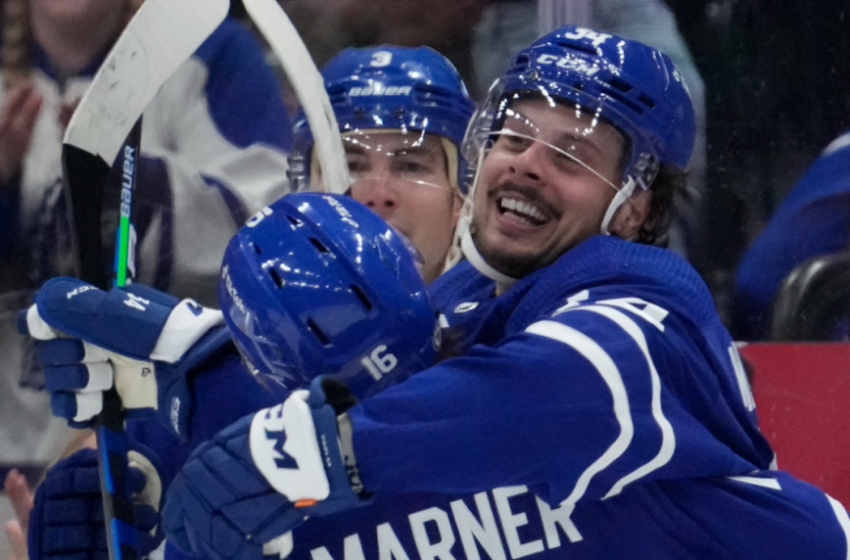 The Toronto Maple Leafs clinched a playoff spot with their 3-2 win over the Montreal Canadiens Saturday night.

The playoff berth is the Leafs’ sixth in a row.

Auston Matthews scored his league-leading 57th and 58th goals of the season 27 seconds apart in the first period for the Leafs.

The sniper’s opener marked his 50th goal in his last 50 games, making him the first player to accomplish the feat since Mario Lemieux in 1995-96.

John Tavares also scored for Toronto (47-19-6), which secured a playoff spot for the sixth straight straight season and hit 100 points in the standings. Erik Kallgren made 24 saves.

Cole Caufield and Joel Edmundson replied for Montreal (20-41-11). Jake Allen stopped the first 14 shots he faced before leaving with an apparent leg injury as he stretched in vain for Matthews’ first of the night. Sam Montembeault made 23 stops the rest of the way.

Matthews set Toronto’s single-season record for goals when he scored for the 55th and 56th time in 2021-22 in Thursday’s 4-3 overtime victory in Dallas.

Rick Vaive, who held the franchise mark of 54 goals in a campaign for 40 years, was on hand at Scotiabank Arena earlier Saturday to personally congratulate the 24-year-old on his accomplishment before becoming the first NHLer in 26 years to bag 50 in 50.

Matthews is now on pace for 67 goals in his 77-game season – he missed three contests with a wrist injury to start the schedule and two via suspension last month – and could become the first player to score 65 since Alex Ovechkin in 2007-08.

Steven Stamkos was the last NHLer to get to 60 goals when he reached the milestone in 2011-12.

The rebuilding Canadiens, who downed the Leafs in their last two meetings at the Bell Centre, weathered an early barrage with Allen holding the fort before Matthews struck at 13:32 of the first period after Toronto defenceman Mark Giordano’s centering pass off the rush ticked off Montreal blue-liner Joel Edmundson. Allen contorted his body to make the initial save, but the puck fell kindly for Matthews to bury his 50th goal in the last 50 games to match Lemieux.

Montembault replaced the ailing Allen, but could do nothing on the first shot he faced when Matthews wired his 58th of the campaign under the netminder’s glove just 27 seconds later.

William Nylander then hit the post on a Toronto power play before Kallgren had to stop Nick Suzuki’s short-handed chance and a Caufield breakaway out of the penalty box.

Montembault made a couple nice stops to keep the score at 2-0 early in the second before Montreal got on the board. Caufield made an incredible play to keep the puck in at the Leafs’ blue line to extend a sequence that eventually saw Edmundson score his second at 5:58 off a Suzuki feed.

Tavares, whose team is in a battle for Atlantic Division playoff positioning, scored his 26th at 8:07 on a shot that went in off Canadiens defenceman Jordan Harris to make it 3-1.

But Montreal, which upset Toronto in the first round of last season’s playoff to kickstart an improbable run to the Stanley Cup final, got back within one with 1:57 left in the period when Caufield buried his 18th moments after a Leafs penalty expired.

The Leafs’ top-ranked power play got a 5-on-3 man advantage for 1:44 with under 10 minutes to go, but Montembeault made a big stop to go along with another Nylander post to keep the visitors within one.

Montreal got a late power play and then pulled the goalie for an extra attack, but Toronto killed it off to secure the win.

NOTES: Caufield’s goal was his 17th in his last 27 games … Canadiens defenceman Jeff Petry returned to the lineup after missing seven games with a lower-body injury … Krallgren got the start ahead of Jack Campbell after Toronto’s No. 1 goalie saw more action than anticipated on the team’s recent four-game road trip … The Canadiens host Winnipeg on Monday, while Toronto welcomes Buffalo on Tuesday.