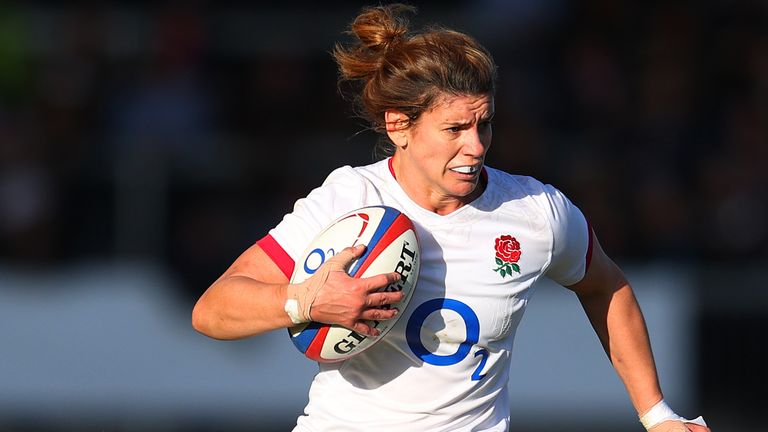 England head coach Simon Middleton has made eight changes for the Women’s Six Nations clash against Wales on Saturday; the match at Kingsholm is set to attract a record crowd for England outside of a World Cup, with over 11,000 tickets sold

Lucy Packer will make her maiden international start at scrum-half in England’s Women’s Six Nations clash with Wales on Saturday.

After making nine changes for England’s 74-0 victory over Italy in round two, head coach Simon Middleton has made a further eight for the crunch clash with Wales.

Saturday’s game at Kingsholm, Gloucester is their first at home for the tournament and is set to attract a record crowd for England outside of the World Cup, with over 11,000 tickets sold.

Harlequins scrum-half Lucy Packer – capped three times previously as a substitute at international level – will make her first start, alongside Zoe Harrison and Helena Rowland who continue at fly-half and inside centre.

Captain Sarah Hunter is back leading the side at No 8, while wing Jess Breach makes her first Red Roses appearance since May 2021.

There are also returns for Marlie Packer at openside flanker, Abby Dow at full-back and Emily Scarratt at outside centre. Fresh from scoring two tries in last Sunday’s thumping win, Sarah McKenna stays on the left wing.

Poppy Cleall lines up back at lock alongside Abbie Ward, while Alex Matthews retains her place at blindside flanker. On the front row, Sarah Bern comes back in to join Vickii Cornborough and Lark Davies.

Gloucester-Hartpury duo Connie Powell and Natasha Hunt are named among the finishers, alongside Amber Reed.

Both teams have won their opening two fixtures coming into Saturday’s game. England followed up an opening 57-5 win over Scotland with last Sunday’s victory in Italy and are eyeing a potential seventh Six Nations victory in a row. Wales, meanwhile, beat Ireland 27-19 week one and Scotland 24-19 last weekend.

Middleton: Some have pulled up a little short

Middleton said ahead of Saturday’s game: “We’re really looking forward to our first home game of this year’s Six Nations.

“We’re pleased with our performances to date and this weekend provides another opportunity for other players to step up.

“Selection has been very tough and I know some players will be bitterly disappointed to not have made the line-up. We said all along we would rotate the squad and we have again this week.

“However, that also came with the requirement of training well enough to merit selection. Some players have pulled up a little short of that mark and given the intense competitive nature of the squad you just can’t afford to not be at your best.

“At the same time that doesn’t necessarily rule them out of the rest of the competition or any squad going forward. Those decisions rest with them and how they react to the disappointment of not making the squad this time around.

“Wales have looked well organised and have finished strong in both games That’s testimony to the work Ioan (Cunningham) and his staff group have put in and of course the attitude of the players.

“It’s great to see and makes for a top-class game and a stadium that will be bouncing.”

Hunter: Wales are a challenging prospect

England captain Hunter is wary of the challenge Wales can pose to England in their Six Nations clash on Saturday.

She said: “There are still areas that we want to improve on but in reflection of where we are at this moment in time we are pretty happy.

“As we go through into Wales and into the next games, it will be about performance, about us, about how we keep developing and keep moving forward as a squad.

“I think from Scotland going into Italy we wanted to work on our line speed and defence and some of our accuracy in attack and we saw real change in that so I think it is just maintaining that.

“Whenever we play Wales it is a tough opposition, they are very physical, they come at you and I think they will give us challenges we haven’t already faced.

“Our focus will have to be on ourselves and playing the game we want to play rather than being side-tracked or have Wales come and impact us.

“It certainly will be a challenging prospect on Saturday.”