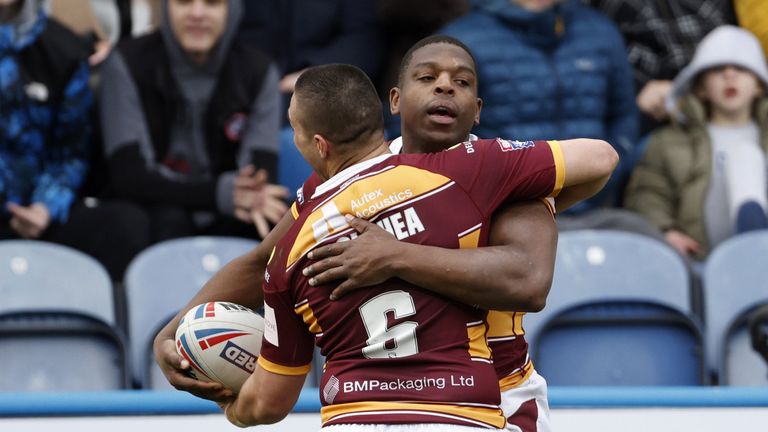 Huddersfield Giants are through to their first Challenge Cup semi-final since 2012 after overcoming Hull FC 24-16 at the John Smith’s Stadium; Wakefield and Wigan meet in the last quarter-final tie on Sunday

Full-back Tui Lolohea produced a man-of-the-match performance to lead Huddersfield to a 24-16 victory over Hull in their Betfred Challenge Cup quarter-final at the John Smith’s Stadium.

The Tonga international half-back, who is proving to be a revelation at full-back, ran the show and scored a try and six goals as the Giants snuffed out the prospect of a Hull derby in the last four.

With both sides scoring three tries, the perfect goalkicking of Lolohea proved decisive as Huddersfield, who have not won the trophy since 1953, joined Hull KR and St Helens in the line-up for the Elland Road semi-finals on May 7.

The line-up will be completed with Wakefield Trinity’s home tie against Wigan on Sunday, when the semi-final draw will be made.

Hull, one of only two teams to beat the high-flying Giants in Super League so far this season, made the brighter start without being able to post any points.

Early handling errors from scrum-half Theo Fages and Lolohea made it an uncomfortable start for Ian Watson’s men, who scored from their first meaningful attack, centre Ricky Leutele demonstrating exceptional strength to force his way over the line after accepting stand-off Jack Cogger’s short pass.

Lolohea added the angled conversion and kicked a penalty in the 19th minute for a high tackle to extend the Giants’ lead to 8-0 as they began to dominate.

The home side ought to have made more of a break by former Hull second-rower Josh Jones and when winger Ashton Golding crossed at the corner, he was brought back for a forward pass.

Unable to make much impression on the Giants’ defence, Hull needed a lift and it came with the introduction from the bench of fit-again Australian stand-off Josh Reynolds, whose delicate kick on the last tackle created a 27th-minute try for Joe Lovodua, goaled by captain Luke Gale.

The Giants responded five minutes later with a training-field move in which Cogger switched the point of attack and Lolohea kicked into space for second-rower Chris McQueen to score their second try.

Lolohea kicked the conversion and added another penalty awarded for offside on the stroke of half-time to make it 16-6.

The Black and Whites stayed in the contest when second-rower Andre Savelio went through a gap in the Huddersfield defence for a 49th-minute try and they almost scored again after centre Josh Griffin pounced on a handling error by Fages.

Lolohea got back to make the tackle and Griffin lost the ball as he stretched for the line.

The miss began to look costly on 61 minutes when Huddersfield captain Luke Yates broke through heart of the visitors’ defence and Lolohea had enough pace to finish off the move from 40 metres out.

The full-back converted his own try and kicked a third penalty to maintain his 100 per cent record but Hull had the final say when former Huddersfield winger Darnell McIntosh went over for a consolation try six minutes from the end.