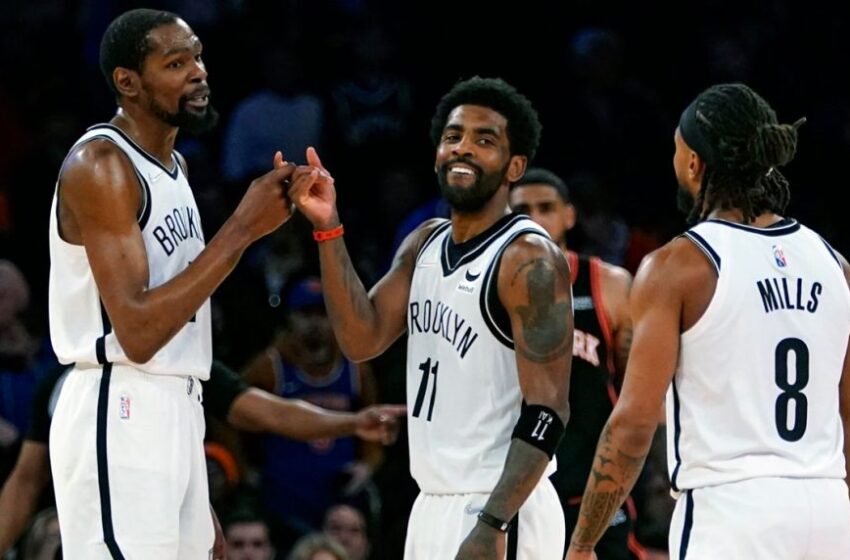 NEW YORK (AP) — Kevin Durant had 32 points, 11 assists and 10 rebounds, leading the Brooklyn Nets back from 21 points down to a 110-98 victory over the New York Knicks on Wednesday night that strengthened their chances of the best spot possible next week in the Eastern Conference play-in tournament.

After watching the Nets come back from 28 down when he was hurt in their last visit to Madison Square Garden, Durant scored 23 points in the second half to fuel this comeback that pulled Brooklyn within a game of Cleveland for seventh place in the East.

The Nets host the Cavaliers on Friday night. If they win that and then beat Indiana on Sunday in their regular-season finale, they would finish seventh and need to win one game in two chances at home in the play-in to qualify for the postseason.

Kyrie Irving added 24 points, eight rebounds and seven assists for the Nets, who swept the four-game season series and beat the Knicks for the seventh straight time, their longest winning streak in the local rivalry since taking a franchise-record 11 in a row from 1984-86.

It appeared it would go the Knicks’ way most of the night, and they were still ahead by 18 with under four minutes left in the third quarter. But Brooklyn cut it to 10 by the end of the period, then opened the fourth with a 15-2 spurt to storm into the lead.

The Knicks recovered to go back ahead by three, but Durant scored eight straight Brooklyn points, including the tiebreaking jumper that made it 98-96 with 4:15 to play. The Nets followed with 3-pointers by Irving, Seth Curry and Patty Mills to break it open.

Curry and Mills each scored 15 points.

Alec Burks scored 24 points, and RJ Barrett had 23 for the Knicks, who were in control after a 19-0 spanning the first and second quarters.

The Knicks closed the first quarter with a 10-0 spurt to take a 29-25 lead. They ran off the first nine of the second period, making it 38-25 on Obi Toppin’s basket just over two minutes in. New York got consecutive 3-pointers from Barrett and Evan Fournier made it 63-46 and the lead was still 17 at the break.

Nets: Coach Steve Nash said G Goran Dragic, who missed his third straight game in the NBA’s health and safety protocols, was feeling better but still in Atlanta, where he started feeling ill. … F James Johnson was out for a second straight games with an illness. … Brooklyn finished 24-17 in the road, most wins in franchise history.

Knicks: Starting C Mitchell Robinson was scratched win an illness unrelated to COVID-19. Knicks coach Tom Thibodeau said rookie G Quentin Grimes, who was out again with a sore right knee, was day to day and he would leave it up to the player and medical staff it he played again this season.

Knicks: At Washington on Friday night.