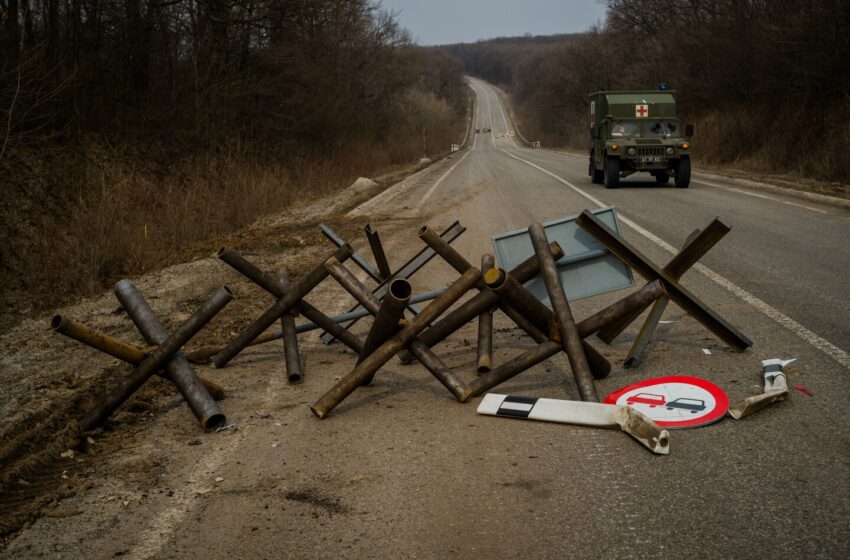 In eastern Ukraine, Russian military razing towns to take them over He had one question. When would the mayor meet to discuss the terms of surrendering the city to Russian forces? If he did, he recalled the man saying, the Russian military would spare the city and the 40,000 civilians inside. Marchenko assumed that the caller was a Russian security agent and that the offer was real.

“I am the mayor of a Ukrainian town, and this town will remain Ukrainian,” Marchenko told him.

“If you aren’t going to give up the city,” the man replied, “we have the will and means to raze your city to the ground.”

In the coming days, Russian planes and heavy artillery fulfilled the threat, bombing the city into rubble and ashes.

In interviews with The Washington Post in recent days, local officials, fighters and residents of Izyum recounted what they called the “scorched earth” tactics of Russian forces that destroyed their home. Ukrainian military officials said the wholesale destruction of towns and villages seems to be a deliberate strategy as Russia tries to take full control of Donetsk and Luhansk, which make up the eastern Ukrainian region known as the Donbas.

Russian President Vladimir Putin has indicated that eastern Ukraine is now the primary target of Russia’s war effort. Russian forces in the air and on the ground have withdrawn from the Kyiv region and are mowing down entire towns in the east, killing and terrorizing civilians simply for the fact of where they live, as they push to take full control of the region.

Izyum was fiercely contested for weeks by Ukrainian forces blocking Russia’s attempts to advance toward the strategically key city of Slovyansk, 30 miles to the southeast. Ukrainian military officials said the Russians seem to be pushing farther and farther south, toward Slovyansk to capture Kramatorsk, the capital of the Donetsk area.

Izyum was seized by Russian forces Friday and is believed now to be the primary military staging and launching point for their assault on what remains of Ukrainian-held territory in the region, according to members of the Ukrainian military and local officials.

To understand what happened in that battered city, which is now fully in Russian control and impossible to visit safely, The Post conducted telephone interviews and reviewed dozens of text messages from residents with relatives still trapped inside the city that describe the brutality of the Russian occupiers. Together, these detailed accounts describe a level of gratuitous violence and cruelty that add to the growing body of evidence of potential war crimes committed by Russian soldiers against civilians.

Residents described hunger, mass looting and, in some cases, forced deportation at the hands of Russian forces. Several spoke of a highly organized system, led by Russian-backed separatists who know the area well, of arrests and forced disappearances targeting activists, community leaders, police officers and members of Ukraine’s military.

In eastern Ukraine, the epicenter of the war, a brutal fight rages

On March 3, the war arrived in the city center when a missile launched from a Russian jet struck Ukraine Street. Rocket and artillery fire throughout the day hit a small shopping district and residential area, according to local authorities. The attack killed eight, including two children, and severely damaged the main hospital. It was the start of an assault that local officials said killed hundreds and drove thousands from the city.

Vitali, 31, who asked to be identified only by his first name out of concern for family members living under Russian occupation, was just 300 yards away when a bomb dropped from a Russian aircraft struck the city. The blast violently shook his apartment building, knocking framed family photographs off the walls of his fifth-floor flat.

“I was terrified. … Everything was trembling,” said Vitali, who fled with his wife and 10-year-old child to a crowded, unlit basement shelter filled with his panicked neighbors.

Artillery strikes and aerial bombardment by Russian forces damaged water pumping stations, the local power plant and gas lines. Shelling took out a television tower and damaged telephone communication networks, cutting much of the city off from the outside world.

“These are the tactics of those barbarians,” said Maksym Strelnik, a city council member. “First they destroy the civilian infrastructure — everything needed for a functioning town, creating conditions for a humanitarian catastrophe, inciting panic and despair among the population.”

Indiscriminate shelling destroyed residential buildings, factories and schools, and heavily damaged both of the city’s newly refurbished hospitals, both of which were forced to close. Images reviewed by The Post show massive craters in once-bustling roadways and buildings reduced to rubble. Local authorities estimated that 80 percent of the city had been destroyed, with only a few homes unscathed.

On John Lennon Square, a plaza renamed from “Soviet Square” as part of the country’s effort to break with communist symbols of the country’s Soviet past, Russian forces bombed a mural to the famous Beatle reading “Give Peace a Chance.” Dozens of apartments in a building nearby were left uninhabitable. A Ukrainian Orthodox church that survived the Nazi occupation in World War II also was damaged.

During the month-long siege and current occupation by the Russian military, local officials have received thousands of messages, from residents desperate for information and from those seeking to save people trapped in the city. The mayor and city council members are often the last hope for families seeking salvation for their loved ones. One message sent to a city council member on March 4 read simply: “Fire.” Another said: “We are trapped.”

“Every day, every hour, they started pounding harder and harder,” Vitali said. “We had no information and didn’t understand where this was all headed. We were ready to escape but didn’t know how to leave.”

With the help of people from nearby cities, local authorities interviewed said they organized the evacuation of thousands of civilians on buses that came under constant fire from Russian artillery and rockets.

On March 9, the city was hit with a heavy barrage of shelling from Russian forces trying to crush the resistance by Ukrainian fighters still in the city. Without gas or electricity, Vitali was cooking over a wood fire near the entryway to his building when the Ukrainian soldiers arrived at his apartment block under heavy shelling. They were driving a small bus to evacuate civilians. Vitali and his family had less than one minute to escape.

“I had just finished cooking when a minibus belonging to the territorial defense drove up the street and a soldier signaled for us to get in the vehicle,” he told The Post. “No advance warning, no preparation, whoever had their stuff packed took it, those that didn’t just jumped in with what they had, without money or documents.”

By March 14, Russian armored columns controlling nearly all exits from the city crossed the Siversky-Donetsk river that divides the town. They overran the remaining Ukrainian military defenses and endangered the last evacuation corridor organized by local authorities. The evacuations ground to a halt after a Russian tank destroyed one of the buses and injured civilians inside.

That same day, Marchenko, the mayor, said he received an order from the region’s military administration that he, too, had to evacuate. “We understood if we don’t go now there wouldn’t be another chance to do so,” he said.

Latest updates from the Ukraine war

Since March 15, there have been no deliveries of food, medical supplies or water to the city, and all efforts to organize an evacuation of civilians have failed, Marchenko said.

After a month without electricity, heat or running water, food and medicine stockpiles are now depleted, he said. There is growing evidence that residents are facing starvation.

A woman texted to Strelnik, the city council member, on March 29 that her disabled 85-year-old mother was trapped, alone and on the verge of starvation. “I know she was eating raw potatoes and now even that is gone — everything is gone,” the woman wrote. “You are her last hope. Thank you.”

But with the Russians in control of the city and advancing toward the rest of territory held by the Ukrainian government in the east, there was little he could do. “The occupiers aren’t letting anyone in,” he responded.

Some of those who escaped have even requested assistance negotiating with the Russians to win release of family members detained by the invaders.

“Maybe we can agree with them somehow,” read one message received Friday by a council member. The woman’s husband, active in an organization promoting Ukrainian culture, was detained by Russian forces March 29.

“He will be killed. They should have released him by now,” the woman wrote, “Please help, I know that you can.”

Information coming out of the city has slowed in recent days as Russian signal jammers block much of the remaining cellphone capacity. And without electricity, most people have no way to charge their phones. Russian soldiers worried that the local population could be feeding information to the Ukrainian military search for cellphones, often forcing men, women and children caught walking in the streets to strip naked in near-freezing temperatures, according to local officials.

The heavy fighting between Russian forces and Ukrainian military units has moved away from the outskirts of the city and toward neighboring villages as the advancing troops move to secure the surrounding areas. Multiple Ukrainian fighters interviewed by The Post spoke of intense shelling and targeting of rural settlements near Izyum in recent days.

“They are on the offensive and have been using scorched-earth tactics, basically erasing Izyum and the neighboring villages from the face of the earth with artillery and aviation,” said Yuriy Kochevenko, whose unit has battled Russian forces.

Ukrainian troops continue to fight back, shooting down several Russian warplanes in recent days, deploying antitank weapons to destroy Russian armored vehicles gathering in the area. “They are clearly concentrating forces for a new, powerful strike,” he said.

The Russians have now turned their sights on securing these newly occupied areas and stamping out any civilian resistance. According to messages sent by residents inside the city, Russian soldiers rounded up civilians to announce to them that their mayor, Marchenko, had been replaced, telling the assembled crowd, “You’ve been left behind.”

Eugene Lakatosh contributed to this report.