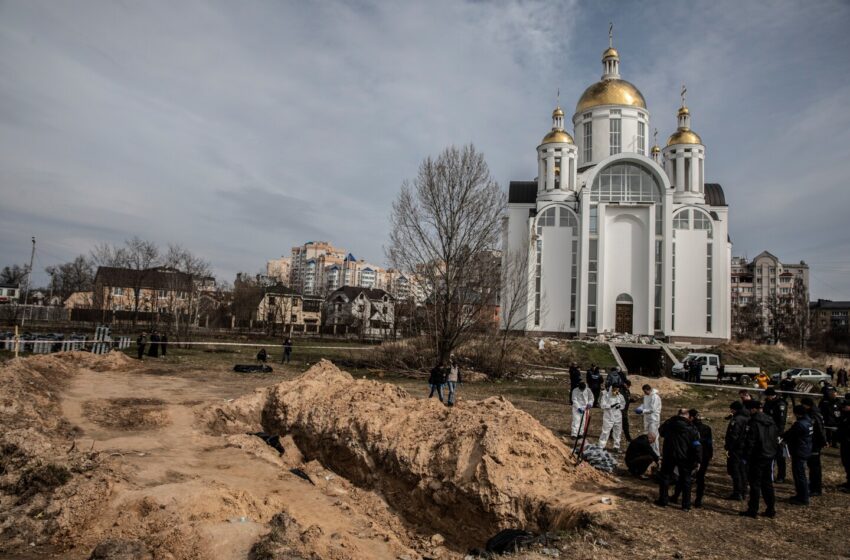 In Bucha, a massive search for bodies left by Russian occupiers BUCHA, Ukraine — There were bodies in every neighborhood.

On Thursday, investigators in this Ukrainian town searched homes and mass graves to learn how many.

Russian soldiers occupied Bucha for a month, and their campaign of atrocities killed hundreds. Since the town’s recapture by Ukrainian forces last week, investigators have been drafted from across the country to comb neighborhoods for the remaining dead.

In a basement, they found five men, each with his hands tied together before someone shot them in the head. In a clearing not far away there was another body, left with the detritus of what had been a Russian military camp.

As police fanned out across the town in search of more, investigators gathered at a mass grave near a gold-topped church in central Bucha. Officials had suggested that it contained at least 50 bodies. Dressed in black fatigues and a vest that read “War Crimes Prosecutor,” the most senior official turned to his colleague, who would count them.

Ukrainian officials said early Friday that they had collected 320 bodies in their week-long search through Bucha, almost half of which had yet to be identified. That number did not include those catalogued throughout the day Friday.

According to residents who endured Russia’s occupation, a district’s treatment depended on its occupiers. Some units behaved better than others. But executions took place throughout the town. Investigators say that dozens of these followed prolonged abuse. Others were simply part of the daily violence that the soldiers — some drunk, some scared — used to instill terror among the population.

At the mass grave Friday, forensics officials worked carefully on the sandy earth, pulling body bag after body bag from the pit onto the ground before they opened them, registered them and then zipped them gently shut.

They had an audience.

Russian soldiers had confiscated cellphones, leaving families disconnected for weeks. When the soldiers left, many residents emerged to find that relatives were missing.

Some were standing at the graveside Friday in search of answers about whether this was their resting place. “I came here because my son was lost here,” said 63-year old Natalia Lukianenko. She had tried calling him more times than she remembered.

When she asked his friends, they said he had not been in touch.

“There are people who say that their kids are buried there,” Lukianenko said anxiously, as she placed a reassuring arm around her daughter, Anna.

The 27-year-old looked at the ground.

Ruslan Kravchenko, the Bucha district’s war crimes prosecutor, said the team had examined 21 bodies, 19 of them killed by gunshots or shrapnel. Two were women. “All necessary examinations will be conducted,” he said. The search was due to resume Saturday.

The prosecutor’s task is the same as that of officials in other cities where abuses by Russian forces have been reported. On Friday, officials in Makariv, southwest of Bucha, said authorities had collected at least 132 bodies, while the search continued.

In Bucha, Washington Post reporters witnessed other corpses being discovered.

Down a woodland path off Yablunska Street, the body of a Ukrainian man, identified by his wife, had been left behind by Russian soldiers after their retreat.

In the town’s northern sector, police entered a yard and found a woman who had died by suicide. The noose she had used to hang herself was still visible on a tree below a canopy of vines. As they searched the garden for further evidence, one of the investigators stopped and shook his head.

“It was bad in this place,” he said. “The people were so scared.”

With the scale of the bloodshed becoming apparent, Ukrainian officials urged the international community to bring alleged crimes committed in Ukraine to an international tribunal.

If they didn’t, said Ukraine’s national prosecutor general, Iryna Venediktova, standing at the graveside, “then it will mean that we don’t have law, or rule of law, at all.”

With authorities overwhelmed, video footage showed that at least one body had been left in a vehicle on a nearby highway for nearly a month.

In the passenger’s seat lay the corpse of a woman, dressed in civilian clothes, according to a video posted to Twitter by a member of Ukraine’s parliament. Holes that appear to be from bullets or shrapnel riddled the vehicle.

The video was published by lawmaker Oleksiy Goncharenko, who said in the recording that the body was a woman’s. Goncharenko said a family had been fleeing the war when they were hit by a Russian attack.

Satellite images provided by Maxar Technologies show that the vehicle had been there for at least three and a half weeks. An image captured by a satellite on March 9 shows the vehicle in the same location as in the video.

The time frame overlaps with intense battles on Bucha’s outskirts. When Russian troops cut a devastating path through suburbs like Bucha that surround the capital, Kyiv, they were aiming to encircle the city, U.S. officials say.

A road approaching the town has effectively become a graveyard for tanks that tried to enter. Inside Bucha, there are few traces of the troops now, just Ukrainian bodies.

“Thank God they left us alone,” one of the police investigators said as he stepped gingerly through the gate of another house where his instructions suggested that a killing had taken place. His shoulders were sagging. He looked exhausted.

“Everyone, leave us alone with our dead here,” he said to journalists recording the scene. “Leave us alone to grieve them.“’

Serhiy Morgunov in Bucha, Jon Swaine in New York, and Sarah Cahlan and Reis Thebault in Washington contributed to this report.