As another season looks to drift to an underwhelming conclusion for Manchester United, the transfer talk takes hold, as it often does at this time of year. There are a number of holes in United’s team, but central midfield is seen by many as an area they haven’t managed to get right for some time now.

A link that refuses to go away is a potential move for West Ham’s Declan Rice. It’s easy to see why. West Ham are doing well under David Moyes, with Rice a regular presence in the centre of the pitch.

He seems to have cemented himself in Gareth Southgate’s team, too: England will be looking for another impressive tournament when they head to Qatar in November and Rice, who is nearing 30 caps having only made his debut in 2019, will likely be a key part of those World Cup plans.

If Rice is at the heart of any international success, his price tag could end up being stratospheric, meaning this coming transfer window could be the best time for any suitor to sign him. He still won’t come cheap, with speculation suggesting that he could end up costing in excess of £100 million — and perhaps much more.

Rice has been a mainstay in the West Ham midfield since he first stepped into the side during the 2017-18 season. Since then, he’s made at least 30 appearances in every season, and it’s hard to imagine a Hammers side without him in the middle.

Rice has been linked to Manchester United so consistently, and for so long now, that a transfer has sometimes felt like an inevitability. Barely a week goes by without a fresh rumour.

In truth, the dysfunctional recruitment at Old Trafford makes it difficult to predict what they may, or may not, do. Without a permanent manager in place, and with some confusion around Ralf Rangnick’s future advisory role, it’s hard to know who would be making the decision to spend so much money on a player.

However, given the length of time these rumours have been running, it’s likely that the interest in Rice has some legs to it. It’s certainly drawn comment from others, with Andy Cole coming out to suggest United look elsewhere, with Rice likely to carry a prohibitive price tag.

United may not be the only team in for Rice, either. The midfielder was a youngster at Chelsea before joining West Ham in 2014. He’s been linked with a move back there in recent years, and reports suggest he might prefer to stay in London. As a sporting project, Chelsea may well have more appeal to it than Manchester United, too, although the uncertainty around the ownership of the club could impact transfer plans at Stamford Bridge. 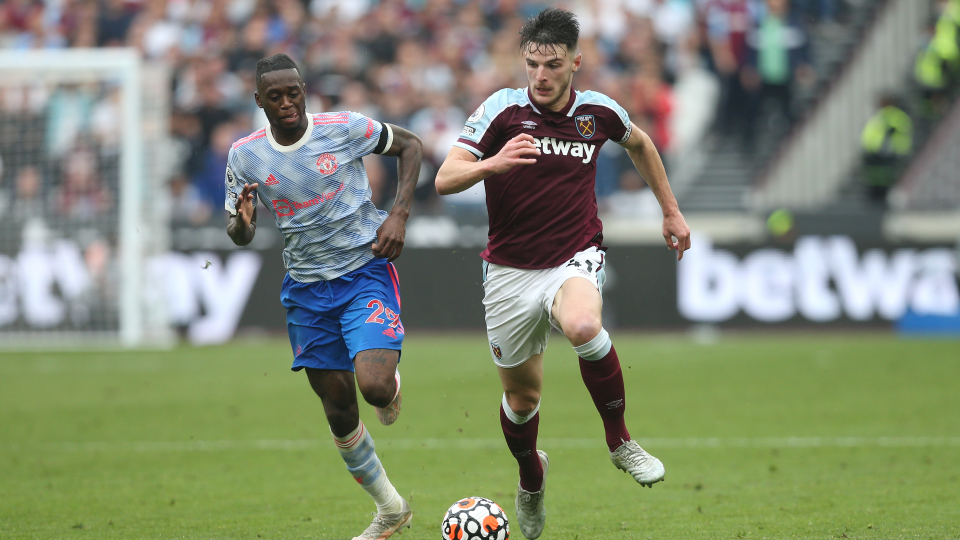 With no confirmation of who will be in charge next season, or how they will play, it’s hard to assess exactly what United would do with Rice. However, they could definitely use him. Paul Pogba is expected to leave, Nemanja Matic isn’t getting any younger, and Scott McTominay’s defensive style seems ill-suited for a team that needs to control games and break down settled defences.

While Fred has had a solid season, Rice would be a strong signing in the centre of the park. He has Premier League experience, and he’s played in big games for England without any questions being asked of his temperament. With United likely to need reinforcements in that position, he would be able to slot into the side as a certainty to start.

98% – Declan Rice only misplaced one of his 54 attempted passes against Dinamo Zagreb (98% accuracy), while he completed 100% of the passes he made in the opposition half (32/32). Director. pic.twitter.com/YH4zQSWITa

What would Declan Rice bring to Man United?

It remains to be seen how United will set up next season but, thankfully, Rice will be able to fit into any set-up easily enough. He can play in a two, and could form a functional partnership with Fred, giving Bruno Fernandes licence to roam further forward. Rice could also play as a lone holding midfielder, which is likely to be his role at a top club.

Still only 23 years old, Rice is a well-rounded player who could form a cog in a top midfield, under the right coach. Mauricio Pochettino and Erik ten Hag the most likely candidates to take the United job, and Rice wouldn’t look out of place in a side managed by either. For United, there’s a definite discussion to be had about whether this is the type of signing they should make.

MORE: Who will be Manchester United manager next season? Latest reports on Pochettino, Ten Hag and Rangnick for 2022-23

United’s erratic recruitment over the past few years has tended to focus on big names rather than developing a profile of player they want, and finding the player that best suits that profile. In truth, Rice is a relatively low-risk move, albeit one that will come at a high cost.

How much will Declan Rice cost?

David Moyes reiterated recently that West Ham are not looking to sell Rice. With the player allegedly priced at £100m last year, Moyes has upped the ante ahead of the coming transfer window. When pressed recently, he put a price tag of £150m on the midfielder — an eye-wateringly high price, designed to keep suitors away. West Ham will point to his good form, his contract situation, and his age — Rice only turned 23 in January — to back up their valuation.

Plus, as Moyes went on to note, there are more than three years left on Rice’s contract. As such, West Ham have no great urgency to sell him, and if he isn’t eager to put pen to paper on a renewal, they will be able to move him on the following year while still expecting a high price.

What are Declan Rice’s key stats?

As mentioned, Rice has managed at least 30 games a season since he came into the team in 2017/18. He played 3,420 minutes in 2019/20, meaning he was an ever-present for the entirety of the Premier League campaign. He won 89 tackles that season, the most in the division, and was second only to Harry Maguire for interceptions.

MORE: How can West Ham can qualify for the Champions League? Hammers eye first appearance in Europe’s top club tournament

However, Rice isn’t just a defensive midfielder. He’s managed at least one goal every season and has picked up four league assists this term, showcasing the more attacking side to his game. Last season, he boasted the best dribble success rate in the league at 89.2 per cent. Rice is adept at carrying the ball forward from midfield and is proactive in using it.