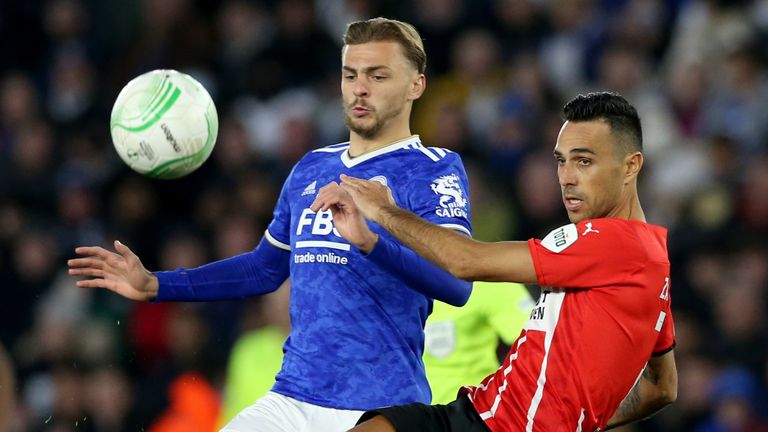 Leicester and PSV played out an entertaining goalless draw at the King Power Stadium to leave their Europa Conference League quarter-final finely poised ahead of next week’s second leg.

Harvey Barnes hit the bar with a thunderous drive in the first half in what was Leicester’s best opportunity of the match, but Brendan Rodgers’ side could not find the breakthrough ahead of Thursday’s return trip to the Netherlands.

​​​​​​PSV, featuring 2014 World Cup winner Mario Gotze, started brightly and went closest when the German was played through on goal after beating the offside trap in just the second minute, only to see his effort thwarted by the outstretched Kasper Schmeichel.

Leicester manager Brendan Rodgers made two changes to the side that began the 1-1 draw with Manchester United in the Premier League last weekend.

Leicester then grew into the game and had a guilt-edged chance of their own to go in front, but Kelechi Iheanacho placed his effort wide in the 20th minute with just PSV goalkeeper Yvon Mvogo to beat.

Barnes then struck the bar for the hosts just before the interval when he played a quick one-two with Iheanacho in the penalty area before seeing his powerful strike cannon back off the crossbar.

Five minutes into the second half, huge appeals from PSV supporters were ignored by referee Ivan Kruzliak when Cody Gakpo appeared to have been caught by Ricardo Pereira but with no VAR in operation, the game remained goalless.

Leicester struggled to create any clear-cut opportunities after the break and the match fizzled out, with both sides perhaps wary of staying in the tie ahead of next Thursday’s second leg at the Philips Stadion. The winner will face Roma or Bodo/Glimt in the last four.

What’s next for Leicester?