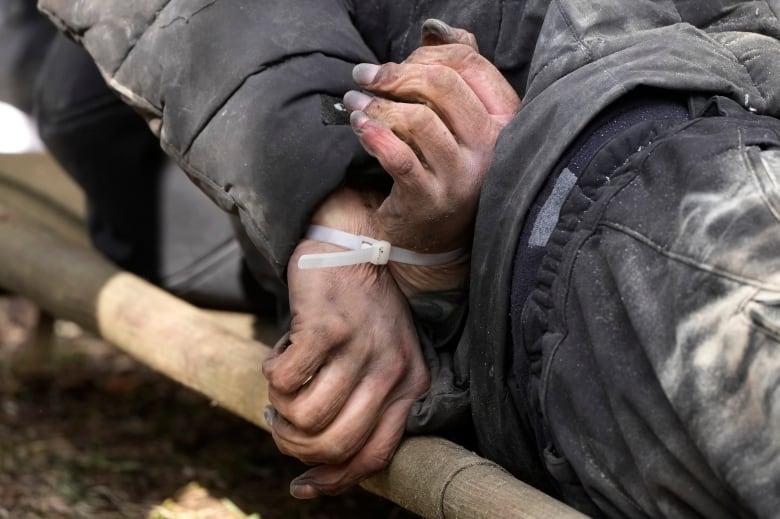 Germany has evidence of Russian involvement in civilian killings in Bucha: report

The German government has indications that Russia was involved in the killing of civilians in the Ukrainian town of Bucha based on satellite images, a security source said on Thursday.

“It’s true that the federal government has indications of Russian perpetration in Bucha,” said the source. “However, these findings on Bucha refer to satellite images. The radio transmissions cannot be clearly assigned to Bucha.”

The source did not elaborate. He said there was no indication of an order from the Russian armed forces’ general staff regarding Bucha.

Bucha, about 40 kilometres northwest of Kyiv, was occupied by Russian troops for more than a month following their Feb. 24 invasion of Ukraine. Local officials say more than 300 people were killed by Russian forces in Bucha alone, and around 50 of them were executed.

Associated Press journalists have reported seeing dozens of bodies in Bucha, some burned, others apparently shot at close range or with their hands bound. In all, Ukrainian officials have said hundreds of bodies of civilians were found in towns around the capital city.

Ukrainian Foreign Minister Dmytro Kuleba warned Thursday that despite a recent Russian pullback, the invasion is not over, pleading for “weapons, weapons and weapons” from NATO to face down the coming offensive in the east. Nations from the Western alliance agreed to increase their supply of arms, spurred on by reports of atrocities by Russian forces in areas surrounding Kyiv.

Western allies also ramped up financial penalties aimed at Moscow on Thursday, including a ban by the European Union on Russian coal imports.

Kuleba encouraged Western countries to continue bearing down on Russia, suggesting that any let up will ultimately result in more suffering for Ukrainians.

“How many Buchas have to take place for you to impose sanctions?” Kuleba asked reporters Thursday. “How many children, women, men have to die — innocent lives have to be lost — for you to understand that you cannot allow sanctions fatigue, as we cannot allow fighting fatigue?”

Ukrainian and several Western leaders have blamed the massacres on Moscow’s troops. Russia has falsely claimed that the scenes in Bucha were staged.

Spiegel said the German intelligence office had intercepted the radio messages and presented the findings in parliament on Wednesday, without giving a source for the information.

Spiegel also said there were additional sound recordings whose physical origin was harder to pinpoint, which it said suggested similar events had occurred in other Ukrainian cities.

Kuleba became emotional while referring to the horrors in Bucha, telling reporters that they couldn’t understand “how it feels after seeing pictures from the town, talking to people who escaped.”

His comments came in response to a reporter’s question about a video that surfaced allegedly showing Ukrainian soldiers shooting a captured and wounded Russian soldier. Kuleba said he had not seen the video but that it would be investigated and acknowledged that there could be “isolated incidents” of violations.

The video has not been independently verified by The Associated Press.

Ukrainian President Volodymyr Zelensky visited Bucha, a town near Kyiv Monday, where an unknown number of people were killed during the Russian invasion, some of whom appear to have been shot at close range. 5:49

Russia casts the evidence of civilian executions as a cynical ploy by Ukraine and its Western backers, who Moscow says are gripped by discriminatory anti-Russian paranoia.