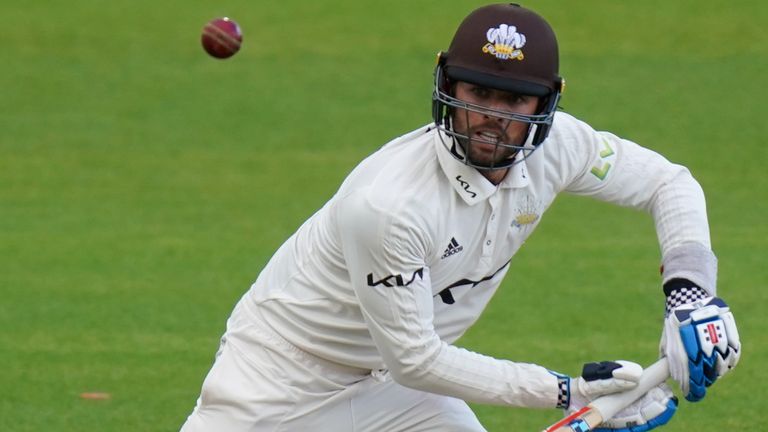 Ben Foakes underlined his intention to nail down the England wicketkeeper’s
spot with a high-class century for Surrey against Warwickshire on the second day of their LV= Insurance County Championship match at Edgbaston.

Foakes struck a composed unbeaten 132 to provide the backbone as Surrey kept the champions in the field for almost two days on the way to an imposing 428 for eight declared.

It was not a flawless knock, as he was dropped in the slips on 37 and 54, but those were rare aberrations in over six hours of impressive concentration and resolve as the 29-year-old faced 263 balls and hit 18 fours and one six.

With support from Ollie Pope (58) and Jordan Clark (50), Foakes lifted Surrey to a total with which they will aim to put their hosts under serious pressure.

In 12 overs before the close, Warwickshire faltered to 16 for two in reply, losing Dom Sibley for a first-ball duck and skipper Will Rhodes for six.

Matt Critchley marked his Essex debut with a century that went up through the gears and heaped more misery on a Kent side kept in the field for five sessions at Chelmsford.

The close-season signing from Derbyshire was finally last man out for 132 as Essex built on the first-wicket platform of 220 established between first-day centurions Sir Alastair Cook and Nick Browne to plunder 514 from an ailing Kent attack.

Kent’s top order was shorn of the likes of Zak Crawley, Jack Leaning, Sam Billings and George Linde for various reasons but Nick Compton eked out a patient 47 in negotiating 33 overs in the evening and reducing Essex’s lead by 122 runs for the loss of Daniel Bell-Drummond.

Opening batter Weatherley had only previously scored one first-class century – 126 not out against Lancashire in 2018 – but waltzed to a brilliant 168.

Ian Holland and the typically stylish James Vince notched half-centuries as Hampshire rode to 428 and into a first-innings advantage of 248 runs.

Ben Green, after taking three for 31, and Tom Lammonby weathered six overs under the lights to end the day 15 without loss.

Rob Keogh and Gareth Berg rescued Northamptonshire with a century stand for the eighth wicket to give their side the edge against Gloucestershire at Wantage Road.

The pair came together with Northants stumbling towards a sizeable first-innings deficit after James Bracey’s hundred had engineered the visitors’ recovery to 223 all out.

Wicketkeeper Bracey showcased his all-round skills with five dismissals as Gloucestershire reduced their fellow Division One newcomers to 129 for seven in reply.

Tim Murtagh claimed the 900th first-class wicket of his career but Derbyshire made decent progress as they replied to Middlesex’s 401 on day two at Lord’s.

The acting skipper brought up his landmark 7,961 days after he had taken his first scalp in 2000, thudding a ball into Billy Godleman’s off-stump via an inside edge.

It was also a landmark day for Josh de Caires as the son of former England captain Michael Atherton took his maiden first-class wicket.

Shan Masood’s 91 for Derbyshire allowed the visitors to reach 177 for four after bowling out the hosts on the stroke of lunch, Alex Thomson returning four for 103 for his best figures in County Championship cricket.

Steven Finn rolled back the years on his Sussex debut as he picked up three wickets including England hopeful Haseeb Hameed for five to leave their match against Nottinghamshire finely poised.

In only his sixth County Championship match since June 2019, the former England seamer removed Hameed and Joe Clarke in a superb new-ball spell of two for 19 from seven overs as Nottinghamshire slumped to 52 for four replying to Sussex’s 375, which included a maiden hundred by Tom Clark.

Finn returned after tea to end a fifth-wicket stand of 108 between Lyndon James (63) and Steven Mullaney, but Mullaney was 79 not out at stumps with Nottinghamshire 214 for five, trailing by 161.

An unbeaten century by Brett D’Oliveira in his first match as club captain put Worcestershire in a strong position against Leicestershire.

The 30-year-old all-rounder, handed the job after Joe Leach stepped down at the end of last season, compiled a fine, measured innings to finish on 118 not out as the visitors to the Uptonsteel County Ground posted a first-innings total of
348.

At the close, Leicestershire were 42 for three in reply, having been six for three after Leach and Charlie Morris took early wickets with the new ball.