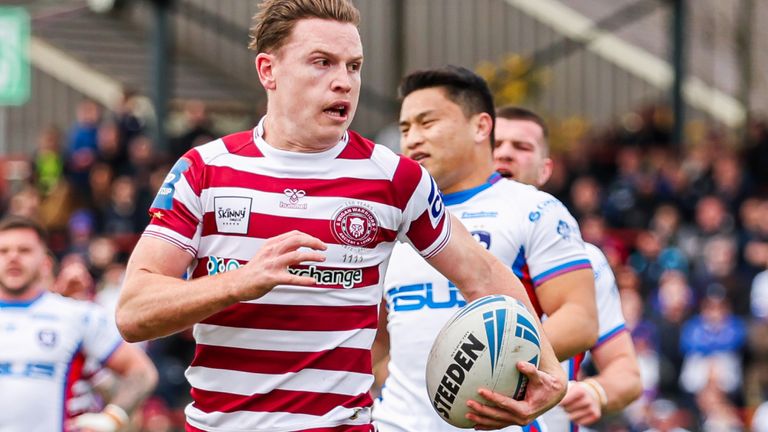 A breathtaking hat-trick of tries from classy full-back Jai Field helped Wigan to a 36-6 victory over Wakefield to set up a mouthwatering Betfred Challenge Cup semi-final showdown with holders St Helens.

Field, the frontrunner for Man of Steel after scoring nine tries in the first seven rounds of Super League, provided another demonstration of his growing value to the Warriors with a man-of-the-match performance in their quarter-final at Belle Vue.

Field, who pledged his future to the Warriors by signing a new two-year contract in the week, was among a host of impressive performers as Matty Peet’s man stepped up their bid for a league and cup double.

They play leaders St Helens in a table-topping clash on Good Friday, live on Sky Sports, and will also take on their arch-rivals at Elland Road on May 7 for a place in the cup final at the Tottenham Hotspur Stadium on May 28.

Wakefield, who were without skipper Jacob Miller, free-scoring winger Tom Johnstone and prop David Fifita, were in touch with the visitors at half-time, when they trailed 12-6, but they had no answer when Wigan went up a gear in the second half.

Trinity, who went into the game on a four-match winning run, dominated the early stages with scrum-half Mason Lino finding the target with a 40-20 kick and maintaining the pressure with grubbers that forced two further sets on the Wigan line.

Winger Lewis Murphy, who was making only his third appearance in place of Johnstone, thought he had opened the scoring when he touched down at the corner only to be denied by slow-motion replays which indicated Zak Hardaker had managed to force him onto the touchline.

It proved to be a huge turning point as Wigan scored within a minute, Field finishing off a break by second rower Liam Farrell for his 10th try of the season, which was goaled by Hardaker.

Winger Iain Thornley, back after a two-month absence with an ankle injury, also went close as the visitors began to find their rhythm but Wakefield, playing their full part in an end-to-end encounter, hit back midway through the first half when Murphy found enough space to plant the ball in the corner with his fingertips.

Full-back Max Jowitt kicked the touchline conversion to tie the scores and another 40-20 kick from Lino enabled Wakefield to camp inside the Wigan 22-metre area but it was once more against the run of play that the visitors scored the next try.

A break from Hardaker created the position for returning captain Thomas Leuluai to jink into space and put substitute forward Ethan Havard over for a try that Hardaker converted for a 12-6 interval lead.

That quickly became 18-6 thanks to more brilliance from Field within a minute of the resumption.

He took play upfield with a trademark break before accepting an offload from replacement prop Patrick Mago to race clear for his second try, again converted by Hardaker.

Trinity had an opportunity to get back into the tie when impressive the impressive Jowitt worked the ball out to the left wing but Murphy could not hold onto the pass and with it went their chances of a first home Challenge Cup win over Wigan for 50 years.

A break by winger Bevan French, starting his first match of the season, created the position from which impressive loose forward John Bateman crafted a try for Hardaker.

Bateman might have had a try himself as he dropped a pass from Hardaker with the line open but Farrell added a fifth try 10 minutes from the end before Field completed his hat-trick and Hardaker made it six goals from as many attempts for a personal 16-point haul.

Wigan vs St Helens, Huddersfield vs Hull KR in semi-finals

St Helens and Wigan Warriors meet in a crucial Super League derby on Friday, live on Sky Sports, and they will collide again at Elland Road on May 7 for a place in the Challenge Cup final at Tottenham Hotspur Stadium.

Huddersfield Giants have been paired with Hull Kingston Rovers in the other semi-final, which also takes place at Elland Road on the same day.

Saints showed their class with a 36-20 victory over Catalans Dragons in Perpignan on Saturday while Wigan were impressive 36-6 winners at Wakefield in Sunday’s last quarter-final.

It is nine years since the Warriors enjoyed the last of their record 19 cup final triumphs, but a hat-trick of tries from in-form full-back Jai Field against Trinity will give them hope of reaching the final on May 28.

Huddersfield have not won the cup since 1953, but they demonstrated their quality with a 24-16 win over Hull on Saturday, while Hull KR were convincing 34-10 winners over Castleford on Friday.