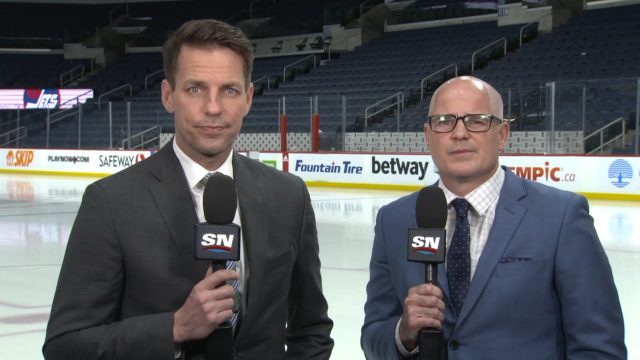 WINNIPEG – Was this a glimpse of what this group might have actually been capable of or was it just another example of the untapped potential and promise unfulfilled?

Truth to be told, a 5-4 overtime loss to the league-leading Colorado Avalanche on Friday probably represented a bit of both for the Winnipeg Jets – and that’s part of the quandary that has been the 2021-22 season.

At a time when the Jets slim playoff hopes have essentially been extinguished — they are seven points behind the Dallas Stars with only 10 games left in the regular season (while the Stars hold one game in hand), it would have been easy for this game to turn into a blowout after the Avalanche took a 4-2 lead on a goal from Nathan MacKinnon just over four minutes into the third period.

Instead, the Jets found a way to force overtime by scoring twice in the final 3:35, something that would not have been possible without Josh Morrissey making the type of save off MacKinnon that would make an actual goalie proud – kicking out his right leg to prevent MacKinnon from scoring into an empty net.

“I don’t think I can use words for what’s going through my head when you see that but, I mean, just try to do whatever you can to try to make a save,” said Morrissey, who established a career high for points (32) with an assist that sent the game to overtime. “I didn’t play a whole lot of goalie in road hockey but more like mini-sticks back in the day. Kick the foot out. I’ll tell (Jets goalie coach Wade Flaherty) that we should work on that with the goalies. Kick save.”

Moments later, there was Morrissey unloading a slapper from the point that Pierre-Luc Dubois fished out before Pavel Francouz could cover up the puck, allowing Nikolaj Ehlers to score his second goal of the game with 15.7 seconds to go in regulation.

Cale Makar buried a one-timer with three seconds remaining in a slashing minor to Ehlers for the game-winner at 2:42 of overtime, sending the Jets to a fourth consecutive loss (0-3-1) to slip to 33-28-11 overall.

“We understand the situation and where we are at in the standings,” said Morrissey. “We had a conversation about not quitting and how we want to look at this next stretch of games here.”

“In the third period, I thought we did a great job of battling back. Unfortunately we couldn’t come away with the win. But the compete level was there and the effort level was there. That’s what we talked about, so that’s nice to see it on display for us.”

This was an entertaining game, one that featured a total of 80 shots on goal – with the Jets finishing with a 23-15 edge in high-danger chances in all situations, according to Natural Stat Trick.

Speaking of that fine line between what might have been and what might eventually be, Jets centre Mark Scheifele was front and centre in this game, coming through with one of his most inspired efforts of the campaign.

For all of the defensive issues that have been highlighted, Scheifele was right in the middle of everything on Friday, collecting two goals and an assist to match the production of Ehlers, his new line-mate.

Scheifele drove the net on his first goal, converting a backdoor tap-in after Ehlers made an impressive fake to freeze Avalanche defenceman Jack Johnson on the two-on-one rush.

Scheiefele set up Ehlers for his first of two goals late in the first period to put the Jets up 2-1, then set the stage for the late rally by showing an explosive burst of speed before ripping home a shot for what was his 29th goal of the season.

“I liked the way that Mark skated,” said Jets interim head coach Dave Lowry. “He was involved. He made good decisions.”

Let that number soak in for a second.

During a season where Scheifele got off to a slow offensive start by his standards, he’s second to only Kyle Connor in points and has reached the 29-goal mark for the fifth time in nine full NHL seasons (with 10 games left to go) and eclipsed the 20-goal plateau for the seventh consecutive campaign.

With 69 points in 66 games, Scheifele is back producing at a point-per-game rate for the sixth consecutive season and he’s done it by consistently hitting the scoresheet.

With points in nine of the past 10 outings, Scheifele has delivered six multi-point outings while racking up six goals and 16 points.

While that isn’t to suggest you turn the other way when it comes to the defensive deficiencies, it’s a not-so-subtle reminder that if the Jets choose to consider trading Scheifele in the offseason, there are risks attached to what would represent another blockbuster.

Top-line centres are not easy to find in the first place and they’re even more difficult to replace.

There will be plenty of time to debate what the Jets should do when it comes to Scheifele’s future, but it’s evenings like this one that leave you wondering what-if to a number of pertinent questions.

What if Scheifele’s level of engagement was this high over the course of the entire season?

What if Scheifele is looking at this final stretch as a way to salvage the disappointment of a season that went sideways both for himself and the team?

What if Scheifele and Ehlers have more nights when they are operating in unison and make life extremely difficult for the opposition?

What if Scheifele views the late season action as a way to enhance his trade value or as an audition for his next employer?

What if Scheifele suits up for Team Canada at the upcoming IIHF World Men’s Hockey Championship and feels rejuvenated after a lengthy offseason?

Oh to be a fly on the wall for that exit meeting Scheifele has with Jets general manager Kevin Cheveldayoff at the end of April.

The contents of what you’d expect to be a candid discussion could have a massive impact in terms of laying the groundwork of what the Jets decide to do or what direction they decide to go, both in terms of personnel decisions and what they do behind the bench with the coaching staff.

Does Scheifele want to continue playing for the team that chose him 7th overall in the 2011 NHL Draft or would he be open to a fresh start elsewhere?

Only Scheifele knows for sure – and whether he needs more time to ponder that query or if he’s already made up his mind – he’s probably not going to share those thoughts publicly anytime soon.

How he performs over the course of these final 10 games – including Sunday’s tilt against the Ottawa Senators – could provide a few important clues though.