Professor Oded Goldreich, a recent recipient of the Israel Prize in mathematics, announced Wednesday that he will donate his NIS 75,000 ($23,350) in prize money to five human rights organizations, including the far-left groups Breaking the Silence and B’Tselem.

Goldreich, a professor of computer science at Israel’s Weizmann Institute, received the Israel Prize at the offices of the Education Ministry Monday, despite opposition from some government ministers and following a nearly year-long political saga over his alleged support for anti-Israel boycotts.

The five groups that will receive the prize money are Breaking the Silence, Standing Together, Kav LaOved, B’Tselem, and Adalah.

Breaking the Silence collects and publicizes mostly anonymous testimony of alleged IDF mistreatment of Palestinians. The organization has riled Israelis, and drawn ire from officials, who have challenged the authenticity of its anonymous claims and decried its work in international forums.

Standing Together supports and donates supplies to soldiers; Kav LaOved is a legal aid group for disadvantaged workers; B’Tselem documents alleged human rights violations in the West Bank; and Adalah is a legal center for Palestinians.

Last month, the High Court of Justice ruled that Education Minister Yifat Shasha-Biton must hand over the prize to Goldreich, following a petition against her refusal to give him the award filed by the members of the prize committee.

The committee had initially awarded the honor to Goldreich last year.

The court ruling was a majority decision, with Justices Yael Willner and Yitzhak Amit siding with the appeal and Justice Noam Sohlberg opposing it.

Denying the honor to a recognized academic over comments he made is “an invitation to monitor, track, and persecute academics in Israel,” Amit said.

Shasha-Biton said at the time that she regretted the justices’ decision, but would respect it. She noted that since the court had previously said the education minister should decide the matter, it should have respected her decision. 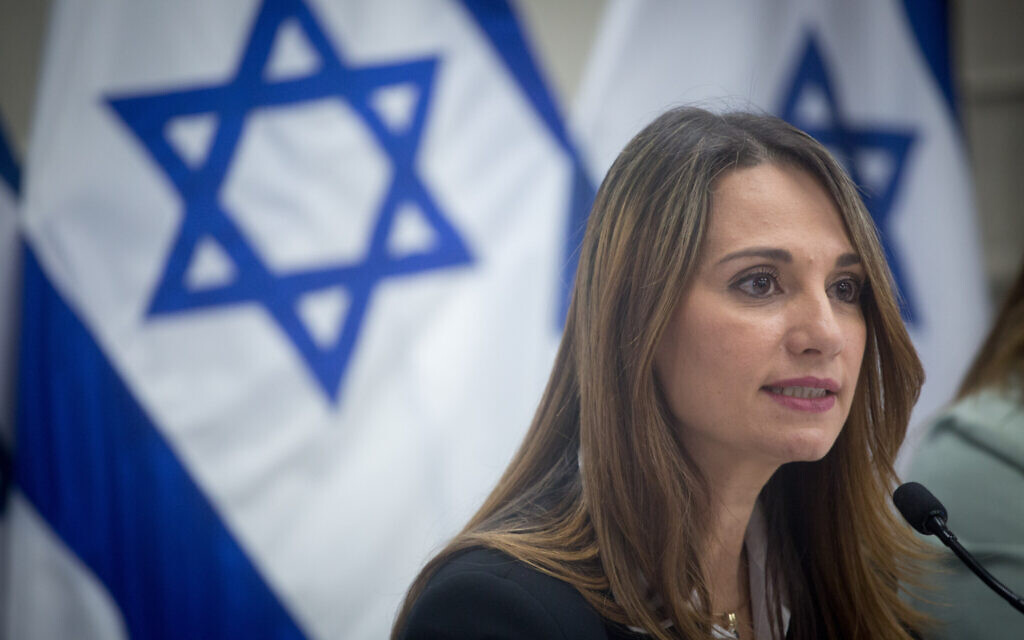 Education Minister Yifat Shasha-Biton speaks at a press conference at the Education Ministry in Tel Aviv, in preparation for the opening of the school year nationwide, on August 31, 2021. (Miriam Alster/Flash90)

“A person who calls for a boycott of an Israeli academic institution is not worthy of a state prize, no matter what his achievements or political views are,” she said.

Likud MK and former intelligence minister Eli Cohen tweeted that “Goldreich is the symptom. The root of the problem is the High Court of Justice.”

Last March, Goldreich signed a petition urging the European Union to stop funding for Ariel University, located in the West Bank settlement of Ariel, sparking anger against him from Israel’s right.

Traditionally, the prestigious award would be presented to the winner by the incumbent education minister. However, Shasha-Biton decided to skip the ceremony Monday, following her previous attempts to deny Goldreich the award over his political views.

Responding to Shasha-Biton’s decision to skip the ceremony, the leader of the far-right Religious Zionism party Bezalel Smotrich wrote on Twitter that it was the right decision.

“A worthy and proper move by Education Minister Shasha-Biton. It helps in reinstating our national dignity and the dignity of the Knesset and government, which were trampled by the High Court,” Smotrich said.

Goldreich received the prize for his work on computational complexity theory. After accepting the reward Monday, Goldreich addressed the Israeli-Palestinian conflict.

“I would like to say something a bit political. The story is not complete without mentioning the price paid by another nation for our revival, and our moral commitment to try as best as we can to compensate and not oppress the other nation,” he said, adding, “We are, of course, doing the exact opposite.”

He said that “personally, it darkens my life.”

Though the prize is usually awarded during a public ceremony on Israel’s Independence Day, Goldreich waived that honor, receiving it instead at the offices of the Education Ministry.

The prize was given to Goldreich in a small ceremony in Jerusalem by David Felber, head of the National Service Division in the ministry.