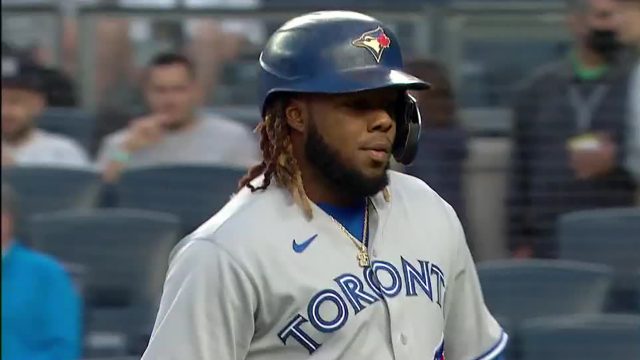 Guerrero took Cole deep in the first inning, then seemed like he’d have to leave an inning later when his bare throwing hand was accidentally spiked by baserunner Aaron Hicks.

Guerrero had to reach across his body for infielder Bo Bichette’s throw and placed his right hand down behind the first base bag to balance. Hicks stomped on it running out an infield single.

The 23-year-old Guerrero immediately began waving the hand around, then walked toward Toronto’s dugout as blood dripped onto his uniform and the turf. A trainer taped up the digit in the dugout, and after a couple of minutes, Guerrero jogged back to first base and the game continued.

With a bloody stain on the right thigh of his pants, the AL MVP runner-up batted again in the top of the third and turned Cole’s 98 mph fastball into a 427-foot, two-run homer and a 3-0 Blue Jays lead.

Guerrero’s first homer was nearly robbed in center by Hicks, who leaped above the wall and briefly had the ball in his glove. It fell out when Hicks hit the wall, bounced off something beyond the home-run barrier and fell back into play. A replay review confirmed the ball went out.

Guerrero has three homers in six games this season.