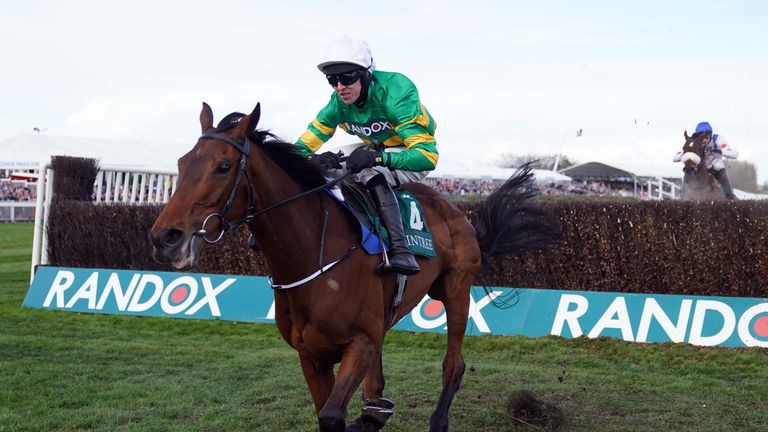 Fakir D’Oudairies plundered a fourth Grade One of his career with another rock-solid display to see off a determined Hitman in the Marsh Chase on Friday at Aintree.

It proved a wise move from trainer Joseph O’Brien to skip a clash with Allaho in the Ryanair Chase at the Cheltenham Festival, turning up at Aintree a fresh horse and it paid dividends.

He went off an odds-on favourite and although his jumping wasn’t foot perfect, the six-year-old managed to creep into contention under jockey Mark Walsh.

The duo took over around the final turn but faced some pressure from the smooth-travelling Hitman and Lorcan Williams, who took the ride after Bryony Frost’s injury.

But when the chips were down, it was the Irish raider who was much too strong for his British rival, pulling away from the Paul Nicholls-trained gelding to win by over five lengths at the finish, with Sceau Royal back in third.

Earlier on the card, Ahoy Senor (4/1) got his own back for previous defeats when landing the Mildmay Novices’ Chase under Derek Fox for the Lucinda Russell team.

Having been beaten by Bravemansgame at Kempton over Christmas and by L’Homme Presse at the Cheltenham Festival, he got his revenge with a bloodless victory from pillar to post.

Jockey Fox set out to make all the running and he was able to control the tempo despite his mount repeatedly jumping out to his right.

Previously unbeaten over fences, Bravemansgame changed his position from being on his outside to go on the rail but quickly came under pressure and was first beaten, and not long after that it soon became apparent L’Homme Presse was not in the same form as at Cheltenham.

That left Fury Road as the big danger travelling as well as the eventual winner, but Ahoy Senor quickly put the race to bed, winning by five lengths and bagging a first Grade One over fences.

Jonbon bags his Grade One

Jonbon (Evens fav) got back to winning ways in the Grade One Top Novices’ Hurdle at Aintree after seeing it out best in a thrilling battle with El Fabiolo.

The Nicky Henderson-trained novice settled beautifully for Aidan Coleman and stalked the leaders until the race changed complexion at the third-last.

Salamanca Bay unseated his rider who in turn hampered El Fabiolo and Paul Townend, losing around four lengths on Jonbon and momentum at a crucial stage.

He managed to get back into contention but could never quite get past after the earlier exertion, with Jonbon and Coleman pulling away to win by a neck at the line.

Langer Dan (4/1 fav) made up for Cheltenham Festival heartbreak when landing the opening 20 Years Together, Alder Hey & Aintree Handicap Hurdle for the Harry and Dan Skelton team.

The six-year-old was a heavily backed 7/2 favourite in the Martin Pipe Conditional Handicap Hurdle last month when being brought down at the second hurdle, but had no such issues on Merseyside, travelling sweetly and missing any trouble before challenging Fils D’oudairies at the final hurdle.

He jumped it well and had enough in the tank to sprint clear of the Nicky Henderson-trained horse, eventually winning by just under two lengths at the line, with Balco Coastal in third also for the Henderson team.