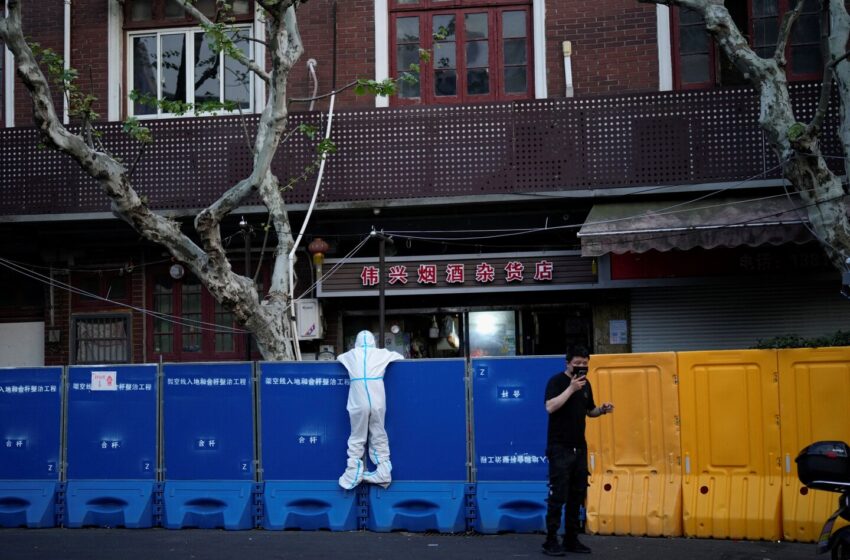 NANJING, China — When I left China in February 2020, Wuhan had just gone into lockdown over a mysterious pneumonia. It was unprecedented: 11 million residents were abruptly kept inside their homes for months, with enforcement so strict that some doors were welded shut.

Over the next two years, countries began to reopen, treating the coronavirus as something to be managed, not eradicated. China chose the radical experiment of sealing itself off from the world. As I waited to see if Chinese authorities would grant me a journalist visa, I wondered what the country would look like if and when I did return.

I landed in Shanghai on March 22, two years after my colleague Gerry Shih and other American journalists were expelled as U.S.-China tensions spilled over to the news media. The return of several American journalists, alongside other foreign workers, seemed to signal a small thaw in U.S.-China relations and that the country was finally emerging from the pandemic. The Chinese officials I spoke to also hoped as much.

There, I found a country stuck in time. The year had changed. The panic and heartbreak hadn’t.

Beijing pulls credentials for journalists at three U.S. news outlets, including The Post

The return was always going to be bittersweet. Both my current teammates are still waiting for visas. The Washington Post’s Beijing office has sat empty for a year and a half.

Getting back to the office was also going to be expensive and time-consuming. With flights between the United States and China scarce, the one-way economy ticket from Dallas to Shanghai cost an eye-watering $8,195. I’d need to spend at least four weeks, maybe five, in various quarantines to get to Beijing, where I was required to register as a journalist. The nation’s capital was still sealed off from the world by a nesting-doll system of quarantines. There were no direct flights.

Still, when I arrived, Shanghai was bustling. I checked into my hotel quarantine, counting down the days to when I could go out in search of the city’s specialties: piping hot soup dumplings in bamboo steamers, delicate broths as clear as glass, fresh mitten crabs.

Then, six days in, Shanghai shut down. The coronavirus had slipped past the defenses that were meant to keep arrivals like me from bringing it in: the plastic-lined hotel hallways, the daily doses of disinfectant, the twice-daily temperature checks, the army of medical workers in hazmat suits. The city’s 26 million people, more than the population of New York state, were ordered to stay in their homes until everyone had been tested and the outbreak quelled — the standard response from China’s “covid zero” handbook.

From my phone, I tracked the rising panic as people found themselves forbidden from leaving their apartments, even in medical emergencies. Officials confirmed that several people died in the confusion, with more reported online. Never mind mitten crabs or soup dumplings. Supply chains had collapsed in Shanghai. Across China’s most glamorous city, many people were struggling — and are still struggling today — to procure any sort of food.

In our quarantine hotel, there were delays the first day, when the trucks carrying our meals got stuck on the road. But after that, our food arrived on schedule, a comfort few others in the city had. It started to feel like we were being protected from the outside, not the reverse.

In the relative safety of the quarantine hotel, our cohort of two dozen — mostly Chinese nationals returning from countries ranging from Argentina to Zambia — had the luxury of boredom. In our individual rooms, we checked the plastic stools multiple times a day for meals, made and watched TikTok videos, swapped jokes in a WeChat group. Over video chat, I watched my fiance in Washington try to teach our cats Pigeon and Rico their names, which they had somehow failed to learn under my tutelage.

Outside, people were getting up at dawn to hunt for scarce groceries on delivery apps, trying to beat back the primordial fear of hunger. Those who tested positive for the virus were taken to a repurposed convention center without private rooms or showers. Haunting videos circulated online of rows of high-rise buildings full of people screaming from their windows in the dark. It was difficult to see China’s proudest city like this.

What the?? This video taken yesterday in Shanghai, China, by the father of a close friend of mine. She verified its authenticity: People screaming out of their windows after a week of total lockdown, no leaving your apartment for any reason. pic.twitter.com/iHGOO8D8Cz

Several issues explain the extreme reaction. China has vaccinated 88 percent of its population with two shots, a higher rate than the United States. But Beijing prioritized its limited vaccines for working-age people, keeping factories running and supplying the world throughout the pandemic, while many elderly people remained unvaccinated. Only half of China’s population over age 80 have gotten two shots, and only one-fifth a third dose. If restrictions lift now, the elderly will likely fill morgues, as happened in Hong Kong.

Nationalism has also slowed things. China has yet to approve the most effective vaccines, made by Pfizer and Moderna. Chinese vaccines made by Sinopharm and Sinovac have proved effective at preventing covid deaths, but they require more boosters to provide the same level of protection, extending the vaccination drive.

There’s also the fear of the unknown. While the covid outbreak in Shanghai has seen remarkably few deaths, it’s hard to predict how deadly a nationwide outbreak would be, especially if hospitals become overwhelmed. And letting the virus loose across a population of 1.4 billion will be a one-way route. There will be no redoes.

So, for now, the lockdowns continue, the conservative approach amid a fierce debate among Chinese officials on whether it is still the right pandemic strategy. And I still had to get to Beijing.

Technically, I was required to register there within a month of entering the country, though this was all but impossible with the quarantines. On my fifteenth day in Shanghai, I saw an opening. The rest of the city was locked down, but somehow our little group could leave in a window of bureaucratic limbo between the first and second quarantines. (Beijing requires anyone entering to spend another two weeks in a low-risk area, somewhere not experiencing a surge in cases like Shanghai). There was nothing I could do for this poor city except to leave, to decrease the number of people requiring urgent food delivery by one.

Cabs were not running, so the quarantine hotel arranged a special bus to take us to the train station. A train was still running to a lower-risk city, Nanjing, which accepted us, reluctantly. After two more weeks quarantine in Nanjing, I could hopefully proceed to China’s capital.

For a moment, I could enjoy some freedom between quarantines. So we traveled, like ghosts, through the streets of a city forbidden to human feet.