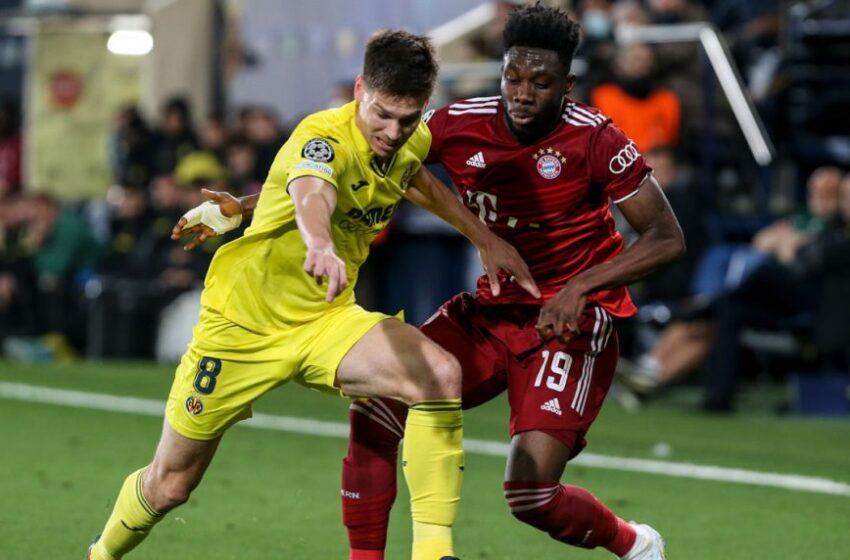 The 2021-22 UEFA Champions League has produced several memorable nights, with so many great individual performances.

The first leg of the quarter-finals proved to be no exception, with Canada’s Alphonso Davies making a return for Bayern Munich after being sidelined since December, and Real Madrid’s Karim Benzema continuing to prove why he is the most lethal striker in the world right now.

Here’s what stood out from this week’s games.

Alphonso Davies was back in the Bayern Munich line-up on Wednesday following a months-long absence, and even though the Germans lost 1-0 to Villarreal they remain alive in this two-game series thanks in no small part to the Canadian fullback.

Davies hadn’t played a competitive game for club or country since Dec. 17 after developing symptoms of myocarditis, a mild heart condition, following a bout of COVID-19. He only recently returned to full training, but Bayern coach Julian Nagelsmann was confident enough to start him in this crucial road game.

Villarreal looked the sharper side and took a deserved lead into halftime after a rather quiet display from the visitors. But both Bayern and Davies looked far more purposeful in the second half and limited the damage the Spaniards were able to inflict, thus giving them a chance to overturn the deficit in next week’s second leg in Germany.

It could have been far worse for the Bavarians if not for Davies, who made a spectacular recovery run to snuff out a clear scoring chance by Villarreal’s Gerard Moreno with a timely block. That sequence was typical of the Canadian international’s form on the night, as he completed 88 per cent of his passes and made three tackles, while showing little signs of rust.

Reigning Champions League holders Chelsea are on the brink of elimination following a 3-1 home loss to Real Madrid on Wednesday, with French striker Karim Benzema netting a hat trick to continue his blistering season for Los Blancos.

This was Benezema’s second consecutive hat trick in the competition, having previously put three goals past Paris Saint-Germain in the second leg of the round of 16. Benzema, 34, now has 37 goals in all competitions in 2021-22 for the Spanish club, and he joined an elite group – alongside Cristiano Ronaldo, Lionel Messi and Robert Lewandowski – as the only men to score more than 80 career goals in the Champions League.

Benzema was a one-man wrecking crew on a rainy night at Stamford Bridge, making two great runs from deep positions to latch onto sublime passes from teammates Vinicius Junior and Luka Modric and head home past Chelsea goalkeeper Edouard Mendy through the first 45 minutes. A mere 50 seconds into the second half he completed his hat trick, pouncing on an error from Mendy to stunt any chance of a Chelsea comeback.

How good has the veteran striker been for Real Madrid in the Champions League this season? Consider this: he’s the first French player to ever score 10 or more goals in a single Champions League campaign, and the first since Just Fontaine scored 10 in 1958-59 when the competition had a different format and was known as the European Cup.

Manchester City bossed Tuesday’s first leg against Atletico Madrid, dictating possession and the pace of the match before the home fans right from the opening kickoff. But for all their domination, the Blues couldn’t find a way to unlock the Spaniard’s defence – at times, it looked like manager Diego Simeone set his team up in a 5-5-0 formation just to frustrate the reigning Premier League champions.

Looking to inject some life into his team’s attack, Man City boss Pep Guardiola took off veteran German midfielder Ilkay Gundogan and brought on English youngster Phil Foden after 68 minutes as part of a triple substitution. It turned out to be a stroke of genius from the Spaniard. A mere 79 seconds after stepping onto the pitch, Foden took the game by the horns when he ventured forward in attack on a probing run. As he drew near the penalty area, a trio of Atletico players rushed to close him down, but he played a sublime through ball into the box for teammate Kevin De Bruyne to slot past goalkeeper Jan Oblak at the far post.

The Blues went on to win 1-0, giving them the advantage ahead of next week’s return match in Spain. Based on what Foden did in the opening leg – he also created another scoring chance for De Bruyne – you’d have to think that Guardiola will reward him with a start in Madrid. Foden’s direct play made a huge impact for Man City, as he earned his seventh career Champions League assist. Only former Arsenal great Cesc Fabregas (with 10 assists) set up more goals in the competition for a Premier League club while still 21 or younger.

Liverpool has one foot in the semifinals after rolling to a comfortable 3-1 win over Benfica in Tuesday’s first leg at Lisbon’s Estadio da Luz. It was a record-breaking result for the Reds, who have now won eight consecutive road matches in all competitions for the first time in their illustrious history.

Ibrahima Konate, 22, made a rare start for Liverpool and repaid manager Jurgen Klopp’s faith by giving the English side the lead after just 17 minutes when he scored his first goal for the club off an in-swinging corner kick from Andrew Robertson. In doing so, the French centre back became the 20th different goal scorer for Liverpool in all competitions this season, which is more than any other Premier League club.

But it was teammate Luis Diaz who starred for Liverpool on the night. Diaz, 25, signed with the Reds in January after spending the previous two-and-a-half seasons with Benfica’s biggest domestic rival in FC Porto. Clearly, the Benfica fans remember Diaz, as he was loudly booed with every touch of the ball he made – once a Porto player, always a Porto player in the eyes of Benfica supporters.

But the Colombian winger ended up having the last laugh – he collected an assist and scored in the 87th minute to snuff out any chance of a comeback by the hosts. Overall, it was a stellar performance from Diaz, whose rampaging runs down the left wing unbalanced Benfica’s defenders and forced them into making a series of mistakes.

John Molinaro is one of the leading soccer journalists in Canada, having covered the game for over 20 years for several media outlets, including Sportsnet, CBC Sports and Sun Media. He is currently the editor-in-chief of TFC Republic, a website dedicated to in-depth coverage of Toronto FC and Canadian soccer. TFC Republic can be found here.