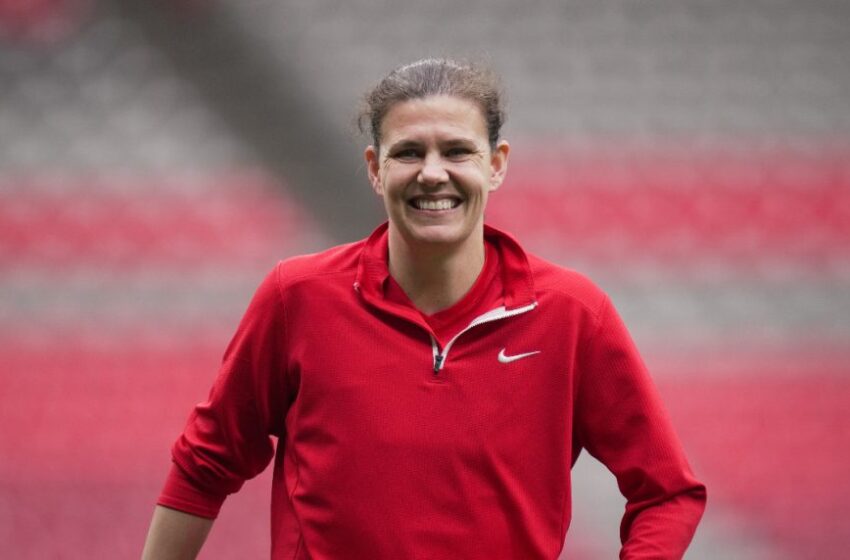 After a lengthy layoff, the Canadian women’s soccer team’s Celebration Tour is about to start up again.

Canada will play Nigeria in an international friendly series, with games on April 8 (at Vancouver’s BC Place) and April 11 (at Starlight Stadium on Victoria Island), marking the team’s return home following a five-month absence.

The matches against the African nation represent the second leg of Canada’s Celebration Tour, in recognition of its gold medal victory at last summer’s Tokyo Olympics. The Canadians haven’t played at home since October, when they beat New Zealand in Montreal and Ottawa in the first part of the Celebration Tour.

Here are four important storylines to follow during Canada’s two-game series vs. Nigeria:

The celebration was originally scheduled for April 2020 with a friendly against Australia at BC Place, but that was postponed on account of the global pandemic. Sinclair, 38, is from B.C., and became the all-time top scorer in international soccer, for both men and women, by scoring her 184th and 185th goals on Jan. 29, 2020, in Texas during the Concacaf qualifying tournament for the Tokyo Olympics.

At the moment, Sinclair has 188 goals in 308 appearances for Canada. The iconic Canadian captain hasn’t been properly feted for her goal scoring achievement, so Friday’s celebration is long overdue. The fact that it will take place in her home province, where the women’s team haven’t played since 2017, makes the occasion all the more special.

“That moment of being at home and with your fans, that’s something this team didn’t get to experience in the moment you achieve something you work your whole career for,” coach Bev Priestman said.

“If I look at Christine, she’s in her hometown, she’s broken a record, she’s got a gold medal, she didn’t get to share that in the moment. So, I think being at home and connecting with our fans is very, very special. But at the same time, we’ll also be focused on where we’re heading.”

This month will mark the final chapter in the career of Canadian goalkeeper Stephanie Labbé, who announced in January her plans to retire in the spring.

Labbé, a 35-year-old from Edmonton, recorded 43 clean sheets in 85 appearances since making her national team debut in 2008. She was a key figure for Canada during its gold-medal run last summer, earning the nickname “the Minister of Defence” for her gusty and outstanding play in Tokyo. She was also a member of Canada’s bronze-medal team at the 2016 Rio Olympics.

“The team always oozed confidence on the pitch because she always did,” Priestman said. “Those big moments with a grin on her face, that got the whole team going. She was a player who was a big influence on the field for us, but was also so influential away from the game. Big shoes to fill.  Steph will be missed.”

Priestman revealed that Labbé will definitely play some part in Friday’s game in Vancouver, and that she has been working out in her native Alberta since parting ways with her pro club, Paris Saint-Germain, earlier this year.

These two games against Nigeria will be crucial tune-ups for Canada in its preparation for July’s Concacaf Championship in Mexico, which serves as the qualifying tournament for both the 2023 World Cup in Australia and New Zealand, and the 2024 Paris Olympics.

Likewise, Nigeria is getting ready for the African Cup of Nations this summer, which doubles as the qualifiers for the 2023 World Cup. As such, Priestman expects Nigeria to give Canada everything it has over these next two games.

Canada is coming off a third-place showing at the Arnold Clark Cup in England in February when it faced three nations ranked in the top 10. Canada, ranked No. 6 the time, drew hosts England (No. 8) in its opening match, before earning a rare win over No. 3 Germany and losing to ninth-ranked Spain.

Even though Nigeria is No. 39 in the rankings, 33 spots below Canada, Priestman sees great value in playing a lower-ranked team because she believes they are the ones that have given the Reds the hardest time during her tenure.

“I think we needed to shift out of playing a top 10 opponent,” Priestman said. “I feel really comfortable against top 10 teams. What we haven’t had so much and what I’m more uncomfortable with is when we play teams outside the top 10. You look at when we played the Czech Republic, Argentina, Chile – those teams asked different questions of us. When the game is more open like they tend to be against a top-tier team, we thrive. So, we needed to change gears headed into the summer with this window and get a different kind of test.”

“I don’t want people to think we’re underestimating this summer. I look back at Canada’s last Olympic qualifiers (in 2020), and it was tight. It’s only going to get tighter in this region, so we can’t under-prepare for this summer.”

All 22 members of Canada’s gold-medal squad from the Tokyo Olympics have been named to Priestman’s roster for the Nigeria games.

Zoe Burns, a 20-year-old defender at the University of Southern California, has earned her first call-up to the senior team after impressing for Canada at the recent Concacaf Women’s Under-20 Championship. Burns scored two goals at the tournament in the Dominican Republic, including the winner in the third-place game against Puerto Rico that sealed Canada’s qualification for the FIFA U-20 World Cup in Costa Rica in August.

“The likes of Zoe Burns, an under-20 player, she’s stepped in and you wouldn’t know she’s never been in this environment,” Priestman said.

The Canadian coach is keen to give as much playing time as she can to these seven players against Nigeria to give herself more options for this summer’s Concacaf Championship.

“I would’ve been naive just to bring in the 22 from the Olympics,” Priestman said. “I had to bring in the extra seven in order to expand our player pool and get them on the pitch. There’s more and more coming down the line, like Cloé Lacasse, and from our youth teams. The pipeline is going to keep churning out players, and it’s great because competition for places is what got us on the podium in Tokyo, and it gets that extra out of players, which is a good thing.”

John Molinaro is one of the leading soccer journalists in Canada, having covered the game for over 20 years for several media outlets, including Sportsnet, CBC Sports and Sun Media. He is the editor-in-chief of TFC Republic, a website dedicated to in-depth coverage of Toronto FC and Canadian soccer. TFC Republic can be found here.