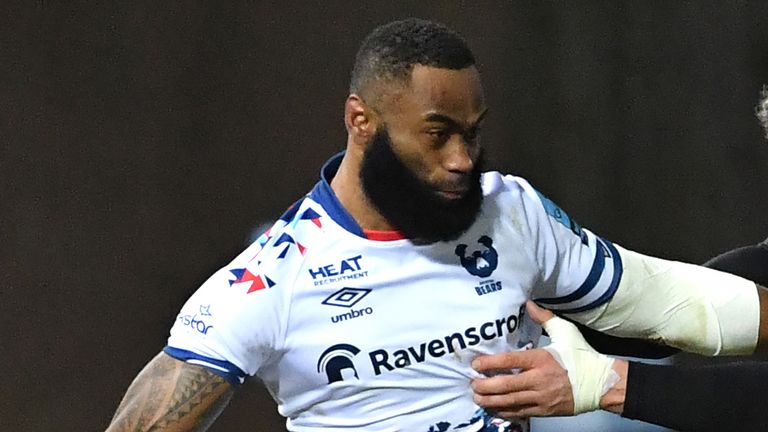 Bristol took their first step towards the Heineken Champions Cup quarter-finals after Semi Radradra’s late try earned them a narrow 10-9 comeback victory over Sale in the first leg of their last-16 clash.

The Fiji flyer’s introduction from the bench sparked his side into life after a poor first half – where neither side dominated – and his superb burst through midfield to score proved decisive.

Callum Sheedy scored a penalty and conversion from the tee, while Rob Du Preez scored all of the Sharks’ points with three penalties.

Alex Sanderson gave Manu Tuilagi a first start since February, with the centre continuing his return from a hamstring problem.

Also starting for the Sharks were outgoing South Africa pair Faf De Klerk and Lood De Jager, with the club confirming both would leave the Premiership side at the end of the season.

Bristol made 10 changes from last week’s defeat at Northampton, including a return for Nathan Hughes after a loan spell at Bath.

However, Pat Lam elected to leave stars Radradra and Charles Piutau on the bench, with the pair being introduced after the break.

Victory over two legs will see the winners face either Racing 92 or Stade Francais in the quarter-finals.

Five tries lit up a lively last-16 first leg at Stade Chaban-Delmas that saw La Rochelle pull away in the third quarter.

Raymond Rhule and Jonathan Danty touched down for the visitors, who were also awarded a penalty try, while Ihaia West slotted four penalties.

Cameron Woki and Federico Mori crossed for Bordeaux, who sit a place higher than their opponents in the French league.

Head coach O’Gara was not present on the sidelines for the victory as he serves a two-week suspension for “indiscipline, in particular for challenging the decisions of match officials”, incurred against Racing 92.

The result puts La Rochelle in a strong position to qualify for the quarter-finals, with the second leg to be played at the Stade Marcel Deflandre next Saturday.