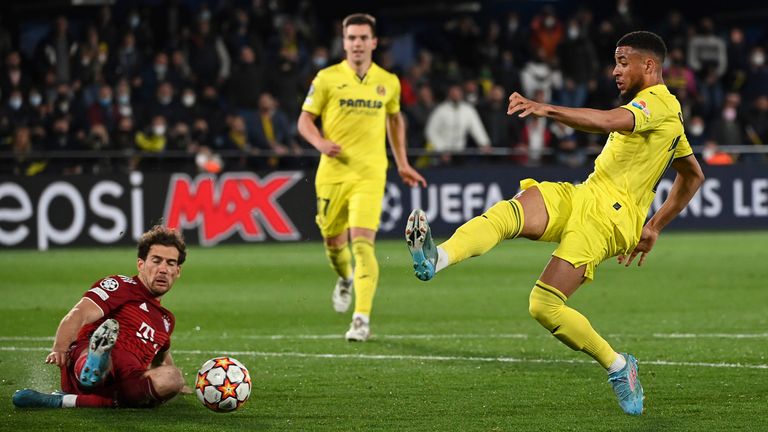 Former Bournemouth winger Danjuma gave the Spaniards a slender advantage going into the return leg by scoring the only goal early in the first half at Estadio de la Ceramica.

But it could have been worse for Bayern, who produced a disappointing display, as Villarreal had another effort ruled out for offside before they struck a post through Gerard Moreno.

The home side, backed by a vociferous crowd, made an excellent start and took an eighth-minute lead through Danjuma.

On-loan Tottenham midfielder Giovani Lo Celso cut the ball back into the area before Danjuma diverted Daniel Parejo’s shot into the bottom corner.

Spain defender Raul Albiol’s well-timed challenge on the edge of the box denied Serge Gnabry a scoring chance as Bayern looked to get a foothold in the game.

But the German champions were relieved to see Pau Torres fail to connect with a flick-on from Parejo’s free-kick as Villarreal threatened again.

And the stadium erupted just before the break when the Spaniards thought they had taken a deserved two-goal lead.

Francis Coquelin’s attempted cross flew into the net, but referee Anthony Taylor was told the French midfielder had been offside after a VAR check and Bayern breathed again.

The visitors, who had failed to register a shot on target, had it all to do at half-time.

Thomas Muller was inches away from diverting in a cross for an equaliser early in the second period, but there was no respite for Bayern, who were spared by the woodwork when Moreno’s shot hit a post in the 53rd minute.

Bayern sent on Leroy Sane and Leon Goretzka for Gnabry and Muller and in the 66th minute Alphonso Davies fired straight at Villarreal goalkeeper Geronimo Rulli. It was Bayern’s first effort on target.

The Bundesliga side pressed in the final 15 minutes, but still found chances hard to come by and Alfonso Pedraza fired a golden chance wide for Villarreal in the 87th minute.

Villarreal coach Unai Emery said their will count for nothing if they fail to finish the job in Germany next week.

“We are here to try to compete and reach the semi-finals. We are not going to dwell on how well we played today, that we have won and that we have competed and been better against Bayern,” Emery told reporters.

“I am happy but cautious. We have 90 minutes left and I want to beat Bayern, knowing that it is very difficult.

“And if I don’t beat them I’m not going to be satisfied, I’m going to be frustrated, regardless of whether we played a good game today.”

Bayern Munich head coach Julian Nagelsmann admitted his side deserved to lose and must improve if they are to reach the semi-finals.

“Basically we didn’t play a good match today,” he said. “In both defence and attack we hardly got any rhythm. We didn’t play attacking football in all phases of the match. At the end we were lucky that we only lost 1-0. They (Villarreal) could have scored one or two more goals.

“We had one or two situations where we could have scored but we wouldn’t have deserved it 100 per cent. Today we just didn’t play well in all areas. But even though the score was 1-0 we still have confidence for the return leg. We will definitely show a different face, we have to and we are capable of doing so. It will definitely be different from how we did today.”

“They (Villarreal) have shown that they can play really well. They’re a typical Spanish team. Maybe not the biggest name in Europe but still with a lot of very good football players. Unless you give them problems they don’t make many mistakes. They are all really well trained.

“You can see that they can play football. We missed a lot of attacking opportunities in the first half where we could have created problems with crosses, but we rarely managed to do so.”