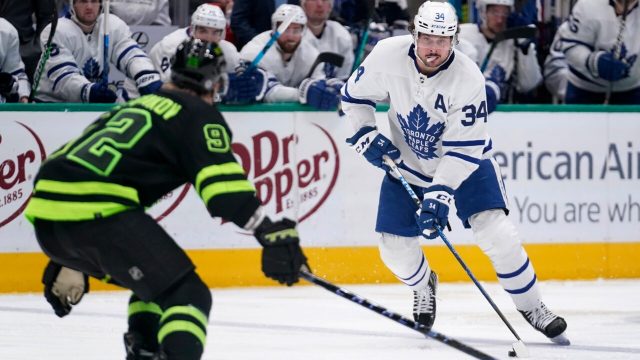 DALLAS – Rick Vaive knows his record should have been broken twice already.

Auston Matthews was tracking 55 in 2019-20 when the pandemic stunted the NHL season. Had the Toronto Maple Leafs superstar been granted a full 82 games in 2020-21, he would’ve given 65 a fright.

“We’ve talked about it at the Leafs gala a couple of times and at the Leafs and Legends golf tournament,” Vaive told us.

“I was very disappointed for him last year. The first few seasons he had good years, but he had injuries. All of a sudden, he’s there, and he’s got the opportunity in spring [of 2020] — and it’s not an injury that takes it away from him.

“If it’s just an injury, that’s part of the game. But it’s a pandemic. That bothered me because it took that opportunity away from him. I felt bad for him. I really did. That must’ve been very frustrating for him.”

If the frustration was boiling underneath, Matthews never let on publicly. He collected his Rocket Richard Trophy. He routinely spoke about his desire for two points, not 55 goals.

“Honestly, it hasn’t really weighed on me too much,” Matthews said inside American Airlines Center, just hours before he’d go out and bump Vaive to second place.

And yet, the eye test and stat sheets would argue that he was pressing a little.

With the record in sight Tuesday in Florida, Matthews registered eight shots but finished with three assists instead. And it wasn’t until his 10th shot Thursday, during a 4-3 overtime win in Dallas, that Papi became the daddy of all Maple Leafs goal scorers.

“It’s just crazy,” Jack Campbell said of Matthews’ pace. “I don’t even have words for it. It’s amazing. And we’re just blessed to have him on our team.”

“There’s a lot of times in the press box you’re left [with a] ‘What did I just watch?’ type vibe,” Jake Muzzin added. “He’s a special player, and we’re lucky to have him.”

History was written with poetry.

Matthews one-time blasted goal 55 on a power-play pass from No. 55, Mark Giordano.

He dropped to his left knee to get the shot off, the right knee to celebrate with an emphatic fist pump and a scream of elation.

Stars defenceman Miro Heiskanen immediately flung the puck out of the net and down the ice in disgust.

Mitch Marner rushed to retrieve the souvenir, and head coach Sheldon Keefe walked along to the bench to tap Matthews on the shoulder and say a few words to his best player.

Then he rushed through the Stars in Period 4 and popped in 56 for good measure.

On the morning of the milestone, Matthews thought back to the snipers he grew up admiring. He’d go through phases where he’d wear his gear like them, tape his stick like them, and binge their YouTube highlights.

“I watched a lot of Ovechkin, Malkin, Crosby, Kane, guys of that stature. Datsyuk,” Matthews said. “There’s no shortage of guys that are still playing that were very good players and scored goals that kids like myself learn from growing up watching.”

Now? Matthews is the model for any aspiring young sniper.

• Dallas’s leading goal scorer, Jason Robertson, says both he and little brother Nick have tried to borrow Matthews’ patented pull-and-release wrister that allows him to whip attempts even in tight traffic.

“It just comes natural to him. His release, his shot, everything. He doesn’t need a lot of space. I want to get to that point. But he shoots with a lot of confidence,” Robertson says.

“It’s definitely something where you kind of change the angle and pull it behind the guy’s stick. Not a lot of players can do that. He’s definitely one of the top — if not the top player — that does that.”

• Awesome seeing a smiling Ben Bishop at American Airlines Center during the morning skate. Injuries forced the affable goaltender into retirement on Dec. 14, but he’s still working out around the team.

“He’s a streaky player. And he hasn’t had a streak yet.” —Stars legend Marty Turco on Alexander Radulov’s four-goal season, via Real Kyper & Bourne

• Jason Spezza was healthy scratched against his former team and has been benched three of the past four.

“He’s played here before. We’re at the point now where we have to make decisions,” said Keefe, who is trying to foster internal competition among his fourth-liners.

Spezza sits at 991 points with only 11 games remaining on Toronto’s schedule. He’s an impending UFA. His quest for 1,000 points is in danger.

• Top-liner Michael Bunting hasn’t scored a goal in 15 games, the longest drought of his NHL career.

“It starts to pile up and weigh on you a little bit,” Keefe said. “But he’s not a passenger on the line. He’s picking up points, and they’re not just gimme secondary assists. He’s on the forecheck, he’s on the track, he’s creating loose pucks, he’s creating havoc around the net…. He draws penalties, and that helps his linemates succeed on the power-play.”