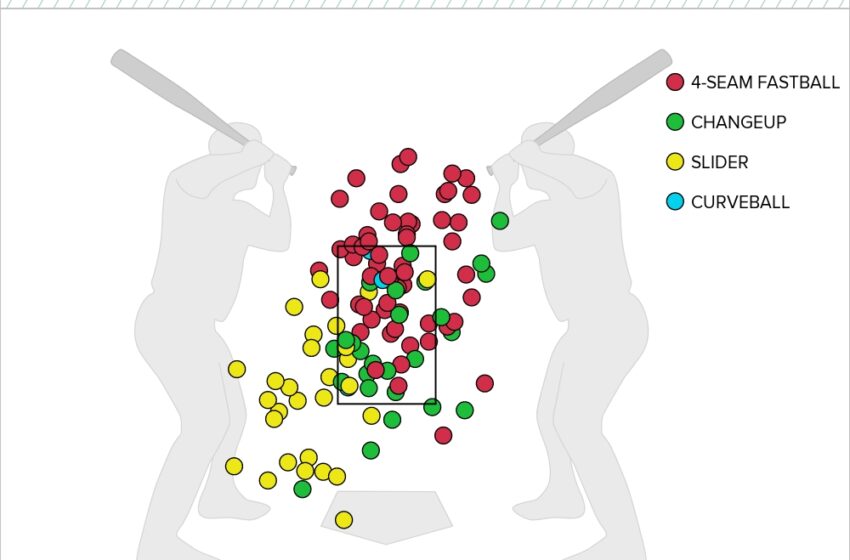 TORONTO — Zack Collins — the 27-year-old, left-handed hitting catcher the Toronto Blue Jays acquired Sunday from the Chicago White Sox in exchange for another 27-year-old, left-handed hitting catcher in Reese McGuire — is here for his bat. It’s what made him a first-rounder; what got him to the big-leagues less than three seasons after he posted a 1.212 OPS as a college junior at Miami; what will ultimately decide how long he sticks around at baseball’s highest level. No one’s saying he’s Johnny Bench.

But at least give him this bit of defensive credit — last April, playing only his fourth game of the season as a catcher, Collins was on the receiving end of all 114 pitches Carlos Rodon threw in a no-hitter against Cleveland. You know, the night Rodon lost a perfect game with one out in the ninth, hitting Roberto Perez on the toe with a wicked backfoot slider, before rallying to complete the 307th no-no in MLB history.

Believe it or not, that was the first time Collins had ever worked with Rodon in a game. And while the overpowering right-hander may be fairly straight forward to game-call for — Rodon didn’t shake Collins off once all night as he played sweeping sliders and fading changeups off elevated, mid-90’s heaters — he’s far from easy to catch. Just look at where some of Rodon’s sliders ended up:

Collins — a physical presence at 6’3, 220-lbs. — had to keep all those yellow dots in front of him. All eyes may be on the pitcher as he crafts a perfect game. But the intensity’s ratcheting up just as much for whoever’s behind the plate. You think every infielder and outfielder’s on their toes, not wanting to be the guy who makes an error if the ball happens to find them? Try being the one guy guaranteed to make a play with every pitch.

“Yeah, it’s a lot of pressure,” Collins says. “You get a dropped third strike or a missed blocked third strike — you can really ruin it. Even just framing pitches up. At that point, every strike matters. It’s early in the season, you don’t want him going too far into his pitch count. It was a wild day.”

It was also a prideful one for Collins, whose work behind the plate has been, let’s say, questioned throughout his career. And, look, the defensive numbers aren’t pretty. The eye test hasn’t been much better. But Collins worked diligently over his half-dozen years in the White Sox organization to improve, buying in to the club’s suggestion to catch with his right knee on the ground and drilling down during off-seasons on his pitch framing and presentation, which has long been his biggest weakness.

Still, he heard all the criticism and naysayers throughout. All the people who said he’d never last behind the plate in the majors — that he ought to be shifted to first base or designated hitter yesterday.

So, it was meaningful that, for one night at least, Collins had helped a pitcher be unhittable, reading swings and making an in-game decision to shift to a more changeup-heavy approach than Rodon typically utilizes — the right-hander used his changeup a season-high 22.9 per cent of the time that night — while shaping a clear zone for home plate umpire Doug Eddings, who had a banner night himself:

Again, the Blue Jays didn’t acquire Collins for his defence. They like his bat and the underlying numbers that suggest it could be a very impactful one with a couple adjustments. He’s clearly Toronto’s third option behind the plate, and much of his playing time is likely to come as a first baseman or designated hitter. But the Blue Jays do believe they can help Collins continue to improve as a catcher, which would only add to his utility off their bench.

“We’ll probably do some things differently than he was used to in Chicago,” says Blue Jays bench coach John Schneider, who works with the club’s catchers. “It’ll probably be a little bit easier for him in terms of setup and what we’re asking him to do. A lot of stuff on the plate as opposed to the edges. He won’t really have to worry about stealing strikes on the corners.

“He had his most success catching Rodon last year, right? And Rodon’s very similar to Robbie Ray, where it was like, ‘Show me the target, I’m letting it eat.’ And a lot of our guys are similar to that, too. They’re trying to do the same things.”

If you’re watching closely, you’ll see what Schneider’s talking about from Danny Jansen and Alejandro Kirk, too. The Blue Jays are asking their catchers to predominantly set up straight down the middle of the plate this season, especially early in counts, encouraging pitchers to do what Ray did — throw their nastiest pitch with conviction in the zone and trust that it’ll miss a bat or generate weak contact.

That placement ought to help Collins with the weakest part of his defensive game — receiving low strikes. Ideally, as a catcher, you’re approaching those bottom-of-the-zone pitches with your glove starting below the ball and moving up towards your chest. But it’s not always that simple with so many pitchers trying to elevate fastballs in today’s game, working north with heaters and south with secondaries. That’s why the Blue Jays drill this phrase into their catchers: “anything below your target is for you, anything above is for your pitcher.”

“Meaning, if the pitch is below where your glove starts, do your thing. Go get it and keep it in front of you. But if the pitch is at your glove or above, you need to keep it in the box,” Schneider says, the box meaning the strike zone. “We want our pitchers in the box. That’s the biggest thing. So, we want our catchers to keep balls that are in the box, in the box. And any strikes he gets for our pitchers that are outside the box is an added bonus.

“So, with Zack, we’re not going to ask him to wander too much or do anything that he’s not comfortable doing. I was just talking to him in the cage. He’s got some good insight — he really does. He understands areas that he’s good at and areas that he needs to be better at. So, by no means are we going to tell him, ‘Do it this way.’  We’re going to see what he’s comfortable with, see how we can work around his skillset, and hopefully make it a little bit better.”

And then there’s the bat, which is of course why he’s here. The No. 10 overall pick in the 2016 draft, Collins quickly rose as high as No. 56 in Baseball America’s top-100 prospect rankings and was widely considered Chicago’s catcher of the future as he shot all the way up to double-A in his first full season, posting an .816 OPS along the way.

But while he was able to hit some very long home runs and demonstrate exceptional plate discipline against elevated competition — he finished second among all minor-leaguers with 101 walks double-A in 2018 — mechanical flaws in his swing began to get exposed by premium velocity, which sent his strikeout and contact rates in opposite, and unideal, directions. The game in general may have been growing more accepting of three-true-outcome approaches, but the fact that half of Collins’ first 1,533 professional plate appearances resulted in a strikeout, walk, or home run was extreme.

And the adverse side of that approach materialized when he made his MLB debut mid-way through 2019, went 2-for-26 with a homer, five walks, and 14 strikeouts, and was quickly demoted back to the minors. Same again in 2020, as Collins received a brief big-league taste only to struggle to a 1-for-16 line. His defence was a struggle, as well, producing a -4 DRS over his first 99.1 big-league innings behind the plate and below-average framing grades from both FanGraphs and Baseball Savant.

In the meantime, the win-now White Sox looked elsewhere for a solution behind the plate, signing Yasmani Grandal to a four-year, $73-million deal. And in 2021, with Grandal sidelined and opportunity behind the plate up for grabs between Collins and career minor-leaguer Seby Zavala, the White Sox tipped their hand further. Zavala progressively ate into Collins’ playing time until Grandal was ready to return and the club had to choose one or the other. They chose Zavala, optioning Collins back to triple-A for the first time since 2019.

And so, Collins entered this spring with a a.195/.315/.330 line across 351 plate appearances over his first three MLB seasons, standing in stark contrast to the .268/.385/.532 one he’d put up over 405 triple-A plate appearances prior. Collins was again battling Zavala — along with what was left of Jonathan Lucroy — for the right to back up Grandal. Until he wasn’t.

“The trade definitely caught me off guard,” Collins says. “It’s pretty much the end of spring training, we’re getting ready to go wherever we were going, and then all of a sudden I get a call that I’m coming here. It’s been pretty crazy.

“The White Sox, they pretty much just told me thanks for everything. That they appreciated everything I’ve done for them. Obviously, I was drafted by them so it was a little bittersweet. But it’s part of the game.”

He also sees pitches exceptionally well, having posted a 17.5 per cent walk rate since turning professional. That mixture of patience and power could be a lethal one if Collins can put it all together. But in his sparse opportunities at the big-league level over the last three seasons, it simply hasn’t clicked.

A constant project — and source of frustration, ultimately — during Collins’ time with the White Sox was addressing a hitch in his swing that he’s carried since he was playing youth baseball, a movement inefficiency that makes it difficult to be consistently on time with the velocity and action of big-league pitching. He’s tried everything. Waggling his bat high over his head; resting it on his shoulder; adding and subtracting this and that from his swing. Nothing’s really worked. And, if he’s being honest, he’s done trying.

“That’s all I did my whole college career. That’s how I hit growing up. Not really worrying too much mechanically about the swing. I’m trying not to get into mechanics anymore. I’m trying to just wipe everything clean and go out there and hit the ball far.”

From a Blue Jays perspective, that’ll work. Whether it’s as a first baseman, designated hitter, or catcher. It remains to be seen how much opportunity Collins gets behind the plate with his new team. He hasn’t caught anyone on the Blue Jays staff before, after all. There’s a lot to learn. The last few days after being traded have been a whirlwind. But considering Opening Day is, uh, today, the next several ought to be just as busy as Collins scrambles to learn all these new arms.

But, hey, he hadn’t caught Rodon in a game before, either. And that worked out pretty well for all involved. Traded from one AL pennant favourite to another, a new staff, a new environment, and a new coaching philosophy might just be what Collins needs to start realizing more of his obvious potential — whether it’s behind the plate or standing next to it.

“I’m super excited to be here. I honestly couldn’t be happier. I never thought that I’d be going from a really, really good team to an even better team. It’s pretty crazy,” he says. “So, I’m just looking to do whatever I can to help this team win. I’m willing to play wherever, do whatever. All I’m looking for is a ring on my finger.”