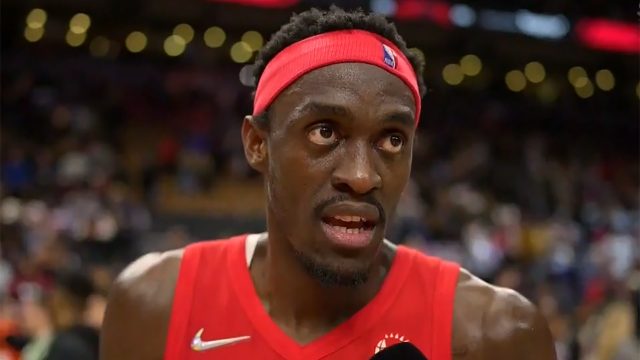 Here are 10 takeaways from the Toronto Raptors’ 119-114 win over the Philadelphia 76ers.

One – The Raptors easily handled the Sixers for a statement win. On a night where the Raptors were short two starters, opting for additional rest for Fred VanVleet and OG Anunoby with a playoff spot already secured, the Raptors were still able to outclass a Sixers team that is decidedly less than the sum of their parts. Philadelphia couldn’t miss from deep, drilling 19 threes while also taking seven additional free throws, and yet the Raptors still held them off to complete a celebratory night at Scotiabank Arena.

Two – Pascal Siakam heard MVP chants in his best performance of the year. Siakam was the best player on the floor in a game that included Joel Embiid and James Harden, finishing with 37 points, 11 rebounds and 12 assists. Siakam got the Raptors going early on when there was no spacing in the dual center lineup, he singlehandedly outscored the Sixers 13-10 in the second half of the third quarter to push the Raptors into the lead, and returned at the end to close it out. This was the type of performance that answers all the doubters. Siakam has consistently demolished playoff teams this season to push the Raptors into the postseason and fully deserves all the plaudits that come with it, including a second appearance on the All-NBA team.

Three – Siakam vanquished an old foe in Embiid. Back in 2019, one of the pivotal moments of the season was the Sixers reassigning Embiid to check Siakam, which frustrated him to such a degree that Siakam intentionally tripped Embiid at one point which was extremely out of character. Siakam could not figure out how to score on Embiid in the post, and did not trust the jumper enough to stretch him out to the perimeter. That was hardly the case in this game, as Siakam went at Embiid without any hesitation. He beat him with all his signature moves, including a stepback for a mid-range jumper, the spin move, and at the very end, Siakam got Embiid to fly out of the way on a subtle head fake before completing the soft finger roll to put the Raptors up four late in the game. But this was hardly a one-off, as Siakam has scored 26, 28 and now 37 in his meetings with Embiid this year.

Four – Gary Trent Jr. had a much easier time without the pesky Matisse Thybulle around. Trent Jr. struggled mightily last time out against the Sixers, scoring only nine points as Thybulle repeatedly blocked his shot and picked his pockets. With Thybulle being ineligible to cross the border due to him being unvaccinated, Trent Jr. was able to go against Tyrese Maxey who is a defensive liability. Trent Jr. scored seven straight in the fourth quarter, including twice where he got downhill into the defence before finishing around the shot contest from Embiid, and a three where he used a pump fake that sent Maxey leaping out of the picture. Trent Jr. is a bit of a wild card, but he has the ability to go off at any time and the Raptors are now 10-2 when he scores 30 or more this season.

Five – Thybulle would provide more perimeter defence, but it would negate the only reason why the Sixers were in this game. As usual, the Raptors swarmed the stars in Embiid and Harden, which led to open threes for the supporting cast. The Sixers were able to start three shooters in Maxey, Danny Green, and Tobias Harris who combined for 13 makes instead of relying on Thybulle who is a complete non-shooter. But the inescapable impression when watching the Sixers is that they are static. It’s either isolations for Embiid, or Harden taking a dozen dribbles before stepping back. Maxey is quick and much improved from deep, but nobody else moves and nobody else even gets a chance to make a play. It makes them easy to guard. The only difference between this game and when the Raptors held them to 88 points last month is that the supporting cast got hot, and it still didn’t matter.

Six – Harden just doesn’t look like the former MVP that used to carve the Raptors apart. This version is slower and unable to generate space which used to be his specialty. Even when he gets favorite matchups like the diminutive Malachi Flynn or a longtime veteran in Thad Young, Harden was still resorting to foul baiting and stepbacks, including a deflating miss late in the game where he shot an airball against Young. The Raptors took an innovative approach towards guarding the tricky pick-and-roll combination with Harden and Embiid. When the screen came, Embiid’s defender stayed right with him offering no room to roll or to pop because he gave no help at all on Harden, who was pressured downhill by his man who would then rotate out to a second player, while a third Raptors defender would slide over under the rim waiting to challenge Harden who inevitably tries to score down low. The old Harden would have beat this scheme with his trusty runner in the lane, or by bumping the defender to create the space to shoot, but he seems to lack any explosion whatsoever at the basket.

Seven – Precious Achiuwa’s conversion rate is catching up to his confidence. The budding flashes that he showed at the start of the season have now become the staples of his game. Achiuwa nailed a three early in the game, which prompted the Sixers to run him off the line. Achiuwa countered astutely by driving the ball and swinging it back out to the corner for an assist to Thad Young. Achiuwa was in such a rhythm that he started to take increasingly more audacious shots, including a stepback three, and a pull-up in transition during the fourth quarter that forced the Sixers into calling a timeout. It might still feel odd to see Achiuwa splashing threes at a 40 percent clip since the All-Star break, but it matches the eye test. Come early enough to a Raptors game to see the warmups, and you’ll catch Achiuwa swishing 10 triples from the wing as if this was always his role.

Eight – Nick Nurse started both of his centers, but quickly pivoted away from it. The Raptors got off to a sluggish start for reasons other than how they lined up, but Nurse’s choice to start Khem Birch and Achiuwa in place of two injured perimeter players was hardly ideal. Birch being a total non-factor in scoring allowed Embiid to roam freely as a help defender, which made it very difficult for anyone to get into the paint. At one point, Siakam had Danny Green in isolation, but Birch came over to screen which brought Embiid into the play. And even after Siakam frantically waved Birch away, Embiid lingered to form a wall against Siakam. Nurse opened the second half with Birch again, but he did swap out Achiuwa for Chris Boucher, and took out Birch early. The Raptors won the 35 minutes without Birch by 18 points.

Nine – Scottie Barnes was quiet for three quarters but came alive in the fourth. Barnes led the charge with Siakam on the bench at the start of the fourth, popping in a three from the top, pulling up from mid-range, setting up Achiuwa with a cross-court feed for three, and rolled to the basket for a layup to force the Sixers into a timeout. He later capped off the win with a breakaway dunk off a late turnover by Harden, where Siakam whipped the pass ahead to Barnes who looked back at Green before an emphatic dunk. The pattern has been the same for Barnes in the last two games, and at other points in the season. He often starts off quiet, before going off for double-digit scoring quarters in the third or fourth. Barnes finished with a double-double of 13 points and 10 rebounds.

Ten – Green finally received his ring from the 2019 championship. Siakam and VanVleet presented Green with his jewelry after his tribute video, and he heard a rousing ovation from the Scotiabank Arena. It’s odd that he waited over 900 days for this moment, and even received another ring during the time in-between from the Lakers, but Green was able to enjoy the moment with friends and family. He also had his best game against the Raptors since leaving, knocking down six threes including a heavily contested shot in the fourth to help the Sixers keep pace. After the game, Green returned to the court wearing a sparkly red jacket to take photos with friends and family who had made the trip to share in this moment with him.