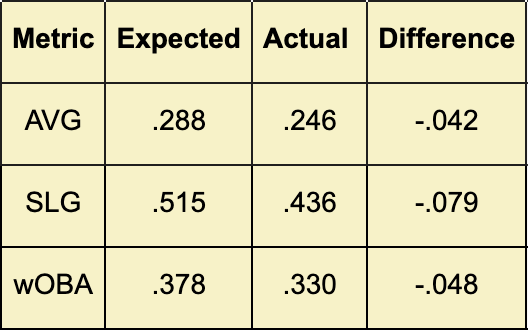 When Alejandro Kirk debuted with the Toronto Blue Jays in 2020 his rapid ascendence seemed critical to the team’s progression.

Since that time, Vladimir Guerrero Jr., has broken out, Bo Bichette and Teoscar Hernandez have sustained all-star level production, plus the team has added José Berríos and Kevin Gausman on nine-figure deals and seen Robbie Ray put together a Cy Young season. The team even saw another catcher, Gabriel Moreno, become one of baseball’s hottest prospects.

Kirk has faded into the background all of a sudden, but on a team full of known quantities, he enters the year as perhaps the Blue Jays’ best breakout candidate.

Last season, the .242/.328/.436 line Kirk mustered was strong for a catcher and slightly below-average for a DH. That sounds about right for a guy who’s part-catcher, part-DH, but it undersells what he showed in his age-22 season.

If you take a jaunt over to Kirk’s Baseball Savant page, you’ll find the five hitters he was deemed most similar to in 2021 — based on his walks, strikeouts, and contact quality — were the following: Jesse Winker, Manny Machado, Matt Olson, Corey Seager and Brandon Crawford.

Four of those five players were all-stars (Seager probably would’ve made it five with better health), and they combined to hit .289/.373/.589 for a 140 wRC+. Based on raw stats alone, Kirk doesn’t seem to belong anywhere near this group, but his expected numbers tell a different story.

The difference between expected and real production can be tough to interpret. Some players, like Miguel Cabrera and Kendrys Morales, consistently see their production fall short of Statcast’s expectations due to an extreme lack of footspeed and tendency to rip hard groundballs.

On the other hand, it can often be explained by random variation — especially in small samples. Both 2021 MVPs had wOBA’s at least .045 below their xwOBA’s during the shortened 2020 campaign before posting numbers aligned with Statcast’s expectations last year.

It is tempting to assume that Kirk is a Cabrera or Morales based on his 14th percentile Sprint Speed, but that’s not really what we saw in 2021. Kirk’s infield hit rate of five percent was just below league-average (6.9 percent) and of his 24 singles only two of them were clearly doubles for a faster runner:

For the sake of argument, if we said Kirk’s lack of speed cost him two infield singles, and turned four singles into doubles—a pretty clear overstatement—the catcher still would’ve hit .254 and slugged .473, well below his expected numbers.

A bigger issue for Kirk seems to be hard-hit balls finding their way into gloves. On his 145 balls in play last season, the catcher scorched 13 with an exit velocity of at least 100 mph and an Expected Batting Average of at least .500 that resulted in outs.

Here’s how that stands up next to the rest of the projected Blue Jays lineup:

That has nothing to do with Kirk’s wheels, or lack thereof, and it seems safe to assume his luck will be a little better in 2022 whether that means not hitting the ball to the deepest part of the ballpark…

Between the star power in the Blue Jays lineup, the Moreno hype, and a 2021 season that was more solid than spectacular, Kirk has been easy to overlook entering this year.

Zooming out a bit, though, it’s rather astounding that a 23-year-old whose primary position is catcher projects to take a large share of DH at-bats for a lineup that should be among the best in the majors. There’s a reason the Blue Jays pencilled him in sixth into their Opening Day lineup — ahead of the far more established Matt Chapman — and 2022 could be the year he establishes himself as a crucial cog in Toronto’s offensive machine.